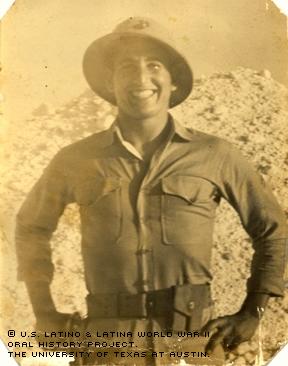 When Fernando Bernacett came to New York City to find his father as a 6-year-old in 1929, he had no idea what an adventure he was beginning. By the time the Puerto Rico native retired in Miami, he’d witnessed the Great Depression, helped in the aftermath of Pearl Harbor, guarded the atomic bomb, was quarantined for tuberculosis and watched the World Trade Center fall.

Bernacett's mother died in childbirth and his father left shortly thereafter. His grandmother cared for him until her death, when he was 6 years old. An orphanage took Bernacett in, but he soon left for New York City to try to find his father.

Of his first days in New York, Bernacett says in addition to not being able to find his father, he couldn’t find food. Bernacett spoke no English and never became fluent in Spanish, so he had to piece together sentences from what he heard, he says.

He never went to school.

"I am alone all the time," said Bernacett, remembering not only his early childhood but seemingly his entire life. He has lived as a destitute, eating out of trashcans.

"I've been a beggar for most of my life," he said.

The police eventually picked Bernacett up for begging and sent him to Nevada to work for the Civilian Conservation Corps, a part of the New Deal that was designed to alleviate some of the suffering of the Great Depression. In return for food, lodging and wages, CCC workers built public roads, facilities and other infrastructure.

Bernacett stayed at the camp until he was almost 18, when a Marine Corps representative visited and persuaded him to join. Bernacett trained at Camp Lejeune in North Carolina, but still didn’t speak English well.

"I had to take my training by guessing because I didn't speak well enough," he said. "I never knew one guy in the Marine Corps who spoke Spanish."

After the bombing of Pearl Harbor, Bernacett was sent to Hawaii to stand guard along with 36 other Marines. He remembers all the ships burning while he stood guard day and night, no matter the weather.

"At Pearl Harbor, we cried a lot," Bernacett said.

A year later, he got his first combat action at Midway, where he also learned to use weaponry and make bombs. He and his fellow GIs had to pick up bodies that washed onto shore after each battle, but they could never distinguish between an American or a Japanese, he says.

"That's why nobody can tell you that your kid went home. It was just a guess," Bernacett said.

At Midway, he was one of the best marksmen in his unit, which got him promoted to Corporal, then sent to Johnson Island in Guam to teach new recruits to use guns.

"We had to sleep and eat under the ground. We got dirt in the food and were sick all the time," he said.

Bernacett next moved to the Marshall Islands’ Kwajalein after it was secured by U.S. forces. He was there until 1945, guarding the airport and prisoners of war, as well as the atomic bomb as it made its way for Japan.

Bernacett left the Marine Corps as a Sergeant, a rank he says he was promoted to only because he was the one lucky enough to still be alive.

"I love the Marines," Bernacett said. "As you say, once a Marine, always a Marine."

He views WWII as different from the American wars since.

"In Vietnam and Korea, people like you went to war, and you didn't know what you were fighting for. I was fighting for the freedom of the United States," he said.

After the war, Bernacett was discharged in San Diego, Calif., where he knew no one and had nothing. So he went to work as a tomato picker.

"I didn't appreciate being dumped with nothing in San Diego," Bernacett said. "The least they should have done was give us a few bucks and send us back to where we came from to find a relative or something."

When it was time to sleep, "they'd chase us into the fields like horses," Bernacett said.

Soon, he became severely ill and returned to New York City, where he was quarantined for a year at Bellevue Hospital for tuberculosis. At Bellevue, a Colombian woman offered to take him back to Colombia with her, Bernacett says. So, having nothing in New York City, he took her up on the offer and left with her, he says, staying in Colombia for 26 years.

"I made it good in Colombia. I had a home, a car and a boat," said Bernacett, who noted he returned to the U.S. when the Colombian war became too intense for him.

He was in New York City in 2001 when the World Trade Center was bombed. And now, at almost 80 years old, he lives in Miami, no longer fighting for the U.S., but for his own life against cancer.

"A human gets over everything when the time comes," said Bernacett, reflecting on his life.

Mr. Bernacett was interviewed in Miami, Florida, on September 14, 2002, by Paul Harrigan.