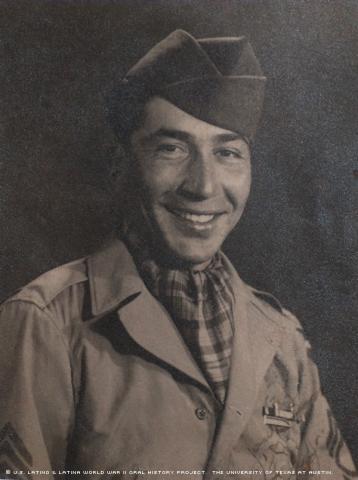 When Felix Longoria enlisted in the Army in October of 1940 as a 20‐year‐old from the South Texas town of Beeville, he had no idea what he was getting into.

Four years later, the United States was in the midst of World War II, and he was receiving the Purple Heart for getting recently wounded in Brest, France.

Longoria and his squad loaded up in trucks bound for Brest, where they came upon an image for which many were unprepared: Vehicles, dead Germans, tanks and trucks as far as one could see were all that was left.

Longoria left to check on another squad when a machine‐gun “let loose.” Longoria and one of his men had been shot, another man killed.

“I was laying there and they kept firing,” said Longoria, who was in the 9th Regiment of the 2nd Infantry Division. “I ran.”

Once Longoria made it to a medic, another squad leader was notified. Longoria recalls the other squad leader, whom he calls Colombo, being a colorful character with a sense of humor to match. When Colombo saw Longoria’s injury, he certainly responded with an unconventional reply:

“You lucky bastard,” Longoria recalled him saying, right before he handed Longoria a cigarette.

Longoria underwent an operation on his arm and stayed in the hospital a week and a half. While recovering, a Red Cross nurse explained to him that a letter would be sent to his family notifying them of his injury. Sending letters prior to telegrams allowed for a better explanation of the injury, providing more information to help families understand and, hopefully, cope emotionally.

Even though the Red Cross letter reached Longoria’s family 20 days prior to a telegram, his parents were still devastated.

“He was wounded several more times after that but refused the Purple Heart because each time a notice was sent to his parents in Beeville, Texas[,] that he had been wounded in battle,” said Richard Longoria, Longoria’s son, in e-mail correspondence with the Project. “He didn’t want to cause any more worry to his mother [Brigida Villareal Longoria] and father [Felix Longoria] by their reading another telegram. His mother fainted when the telegram arrived advising them of his being shot in Brest.”

At the time of Longoria’s enlistment, international conflict hadn’t issued him and his friends at Fort Sam Houston in San Antonio, Texas, any hardships.

“Thing about the war then, there really was no war at all. I’m sure there was something going on while we were there, but we didn’t know anything about it,” Longoria said.

He was at Fort Sam Houston when the Japanese attacked Pearl Harbor on Dec. 7, 1941.

After seeing pictures of the attack, he says he felt sorry for those killed and wounded. Although America’s collective mentality was altered by Pearl Harbor, Longoria says he didn’t see much of a change within Fort Sam Houston.

As Longoria recalls, no one stood guard at gates, because Sam Houston didn’t have a main entrance.

Soldiers had a curfew and were allowed to do as they wished when they were on leave or had free time, Longoria says.

In 1942, the Army transferred Longoria to Camp McCoy in Wisconsin in preparation for battle in France. Although rules and restrictions were somewhat similar, this small-town southern boy experienced one war-preparation exercise for the first time – snow training.

Longoria recalls snow up to his knees in Wisconsin, where he and the other Army trainees were taught how to ski by a Norwegian instructor. By learning how to ski, soldiers could get in and out of situations much quicker than by foot, and much quieter than by military vehicle.

If GIs didn’t learn how to ski, they strapped on snowshoes and pulled toboggans.

In 1943, Longoria and his squad received orders to ship out. All he recalls being able to think about was how much fun they were going to have. The war wasn’t even on their minds.

Longoria experienced his first ocean voyage during an eight‐day trip from New York to Belfast, Ireland. He says he passed time by peeling potatoes with the cooks.

“I didn’t want to be up there to begin with,” Longoria said. “There were three or four bunks crowded on top of the other.”

After docking in Ireland, Longoria and the other soldiers were glad to be off the boat when the Irish greeted them. Training continued as it had in Wisconsin, along with more leave activities. Longoria recalls taking in the tourist hot spots, as well as eating Irish cuisine, going to Irish pubs and enjoying dances, all before his 10:30 p.m. curfew.

Then, in early June of 1944, right as Longoria and the other GIs were getting used to life in Ireland, everything shut down. “Nobody’s coming in, nobody’s coming out,” Longoria said. “Then we knew something was taking place.” Longoria was in Wales when they were put back on a boat and received news of an invasion. The troops were given live ammunition and two days later everything broke lose – D‐Day. Longoria says he and his squad weren’t scared. Instead, they were ready to go.

Once on the beach, on June 12, 1944 (also known as D+6), the men saw bodies floating in the water and scattered about. They were scared but they kept moving, Longoria recalls, because the morbidity was to be treated just like any other job needing to be done. No matter how many times Longoria saw death, German or American, he remembers saying to himself, “They are the same as us.”

Among other wartime memories, Longoria recalls watching Germany’s surrender, celebrating in the streets with civilians and helping release Jewish women from concentration camps. Soon afterward, he was discharged June 27, 1945, at the rank of Tech Sergeant from Fort Sam Houston. In addition to the Purple Heart, he earned a Bronze Star and European Campaign medal for his service.

Departing Europe with people dancing in the streets until 3 a.m., Longoria returned to Beeville, where he “had to get used to a new life,” or “everyday livin’,” as he put it. Despite being back to his same old home, however, he was permanently changed.

“Sometimes at night, sometimes when I’m by myself, things that I did, I couldn’t help it, like shooting people point blank, it don’t erase my mind,” Longoria said.

Felix Longoria was interviewed in Corpus Christi, Texas, on May 30, 2007, by Oscar Gomez.