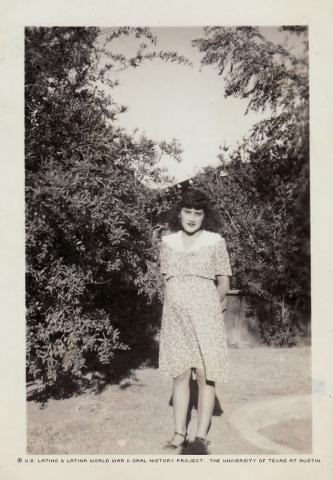 Estela Fernandez was a young woman in El Paso, Texas, when World War II began, so the battlegrounds seemed distant.

Wartime wasn’t about soldiers and combat. Instead, while her husband Johnny was away, she learned how to care for her family, hold a job and value education and family. She and Johnny had married on Nov. 26, 1944, at which point Johnny had already been drafted into the Army and stationed at Ft. Devins in Massachusetts as an amphibious engineer, Fernandez recalls.

Soon after, Johnny transferred to the Air Corps in Valdosta, Ga. And after stops in Columbia and Greenville, S.C., he was off to the Pacific.

Back in El Paso, the USO organized social events, but married women didn’t participate, said Fernandez, who noted that she “didn’t go out looking” while her husband was away. Instead, she says she looked after their home and first child.

She also contended with wartime shortages. Gasoline, sugar, beans and meat were scarce since items like these were rationed in an effort to make sure the Army was fully equipped. Because El Paso was so close to the Mexican border, however, residents found ways around rationing. Supplies in Mexico were plentiful at this time, so many traveled there for food.

“I couldn’t complain about the rationing because we had Juarez to go to,” Fernandez said.

In August of 1946, Johnny was discharged and came home. Two and a half years later, Fernandez gave birth to their second of ultimately six children; they eventually also adopted two children. The couple now has 11 grandchildren and even great-grandchildren.

Fernandez herself was born Nov. 27, 1923, in El Paso, where her parents, José Bárcena and Maria Gutierrez Bárcena, had moved in 1903 from Puebla, Mexico, where José served in the army. In El Paso, José opened a shoe-repair shop and grocery store; he ran the shop, while Maria ran the store, Fernandez says.

As the youngest of 10 children, Fernandez recalls life in El Paso being busy. Maria split her time between working and making a home for her family.

“She always took care to cook and wash,” Fernandez said.

Many of the children, including Fernandez, assisted their dad at the shop. Fernandez attended San Jacinto Grammar School and went on to Bowie High School, where, she said with a smile, she “joined the ROTC, because I didn’t want to take physical education.”

Fernandez and Johnny met and began dating in high school when a friend set them up at a school dance.

“He was supposed to graduate half a year before me, but he waited for me and we graduated together on the same day,” she said.

Fernandez remembers sometimes being the only Latino out of the Army wives she knew during WWII. But for her, it wasn’t a problem.

Fortunately for Fernandez, Johnny and her brothers returned safely from overseas, and her family was able to stay united. Despite her family’s luck, however, she’s humbled by the significant part Latinos played in WWII.

“What other contribution could we give to this country but the lives of those poor young men?” said Fernandez, when asked what she feels was Latinos’ greatest contribution to the war effort.

Mrs. Fernandez was interviewed in El Paso, Texas, on September 1, 2007, by Delia Esparza.