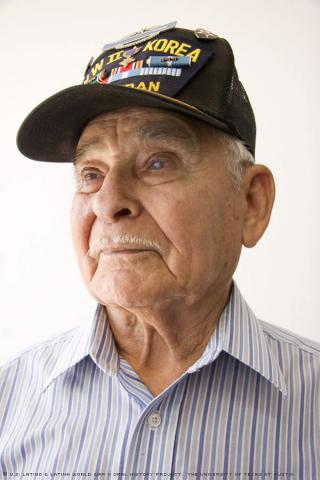 Topics:
Battle of the Bulge

Erasmo G. Lopez spent a good chunk of his twenties on the front lines of battle, both in World War II and the Korean War.

Born and raised in San Antonio, Texas, Lopez was drafted into the Army in 1942 at the age of 20.

“If I hadn’t of gone, they would have taken me,” he half-joked in Spanish.

In Germany, where Uncle Sam sent Lopez’s regiment, the 335th Infantry, part of the 84th Division, after maneuvers training in Lake Charles, La., Lopez was in, among other fights, the Battle of the Bulge.

In the preface of “Nuts: The Battle of the Bulge,” authors Donald M. Goldstein, Katherine V. Dillon and J. Michael Wenger, describe the battle as “a patchwork quilt – a multitude of small engagements played out in or near small towns, most of no military significance.” Despite this fact, the U.S. suffered approximately 81,000 casualties, including 19,000 killed; The British suffered around 1,400 casualties, including approximately 200 killed. Germany lost an estimated total of 100,000 -- dead, wounded and captured. Image after image in Nuts is dominated by snow and rubble, complete destruction.

Lopez was a rifleman during his first war. In addition to fighting in Germany during the Battle of the Bulge, he recalls being at the siege of Bastogne, a hamlet in the southeast of Belgium that U.S. forces defended from German control. The 84th Division eventually moved into the Marché, Germany, area, setting up a defense perimeter against the Germans during the 21st and 22nd of December, and, in the sleet and snow, entering combat between Hargimont and Rochefort. The division remained on the defensive until Dec. 27, “gradually pushing back the German pocket, until the American counteroffensive on 3 January,” the book notes.

Lopez said he tells his friends, “In WWII, I never showed fear,” – while fighting, that is. He says his outer appearance by no means meant he wasn’t scared, and that somebody who said they weren’t scared was lying.

He says he still has five or six friends from WWII, adding, “now they’re old men, like me.”

Lopez was in Europe after WWII’s end there for about six months, working on peace-keeping by collecting rifles and ammunition. He got discharged Jan. 29, 1946, at the rank of Private First Class.

“They didn’t thank us or anything,” he said of his Army separation.

Instead, he signed a bunch of papers, including one for joining the Army Reserve.

Then he headed back to San Antonio, where he worked at Randolph Air Force Base as a painter -- until the end of September in 1950, that is, when he got a letter from the Army telling him to report to Fort Hood. Lopez had been called up for the Korean War.

Since he had already experienced combat, he says he didn’t receive more training. Instead, he was shipped to Japan as a replacement.

A machine-gunner during his second war, Lopez recalls the firearm’s barrel getting hot enough to light a cigar on.

His son, Ignacio Lopez, says the elder Lopez used to talk about how when he was in combat and it would get dark, he would see sparks, then promptly spray bullets in that direction. Silence would often follow, Ignacio recalls his dad saying, which is how Lopez would know he had wounded or killed someone.

Lopez was discharged from the Army a second time on Sept. 5, 1951, at the rank of Corporal. Although he recalls only going to school in San Antonio through the fourth grade, he says he didn’t need formal education for what he went through during the wars. Apparently, Uncle Sam agreed, as he was awarded an American Theater Campaign medal, European-African-Middle Eastern Campaign medal with three bronze stars, a Good Conduct medal and WWII Victory medal, not to mention the Distinguished Service Cross, among other honors, for his Korean War service.

Lopez also got married in 1951, to Consuelo Aguirre. The Lopezes have a son, two granddaughters and three great-grandchildren.

When asked if he has any words of wisdom for them, he said, “What I saw in the two wars, I don’t want that to ever happen here, because it’s ugly. … Poor people,” he said of the citizens of the war-ravaged countries.