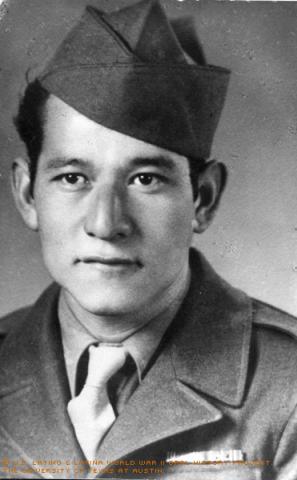 The sun squinted through the leaves, leaving subtle shadows on the cracked concrete sidewalk. There he stood, with a bag slung over his shoulder and a quarter in his pocket, defiant and determined. Success would be hard earned; he knew that from his father, and all the fathers before. But as he stood there -- glancing left, right, left, right -- he didn't seem to mind.

At 26 years old, Enrique Saenz felt he’d waited long for his chance at a college education. He was poor, that he admits. And he had to rely on his brother to make his tuition payments, which often meant he began classes without having paid or without any books.

"I had to wait until he got paid," said Saenz, 79, sitting at his kitchen table in Austin, an array of photographs and books and notebooks haphazardly strewn before him.

It has been 53 years since he arrived at Texas A&I (now Texas A&M - Kingsville ), but he recalls it as though it were yesterday, remembering how the classrooms felt -- "the classes were so big" -- and how he couldn't seem to concentrate and how he "flunked out second semester."

"So I just laid out the summer, and in September, I started again," he said. "But I just couldn't settle down so I quit."

Saenz quit school just before the U.S. entered World War II; it would be some years before he would return to college. Like many young men before him, and like many young man after, he entered the military.

"But I was gung-ho about the Air Force because you know, you could see the guys with the down green jacket and all these medals," he said.

And he would've enjoyed the Air Force tremendously, he confessed, but he failed the entrance exam by one point, earning a 69.

"I hadn't taken any physics and it was mostly physics," he said. "But my buddy, he made a 75, and so he was the only one that went to the Air Force."

A few days later Saenz received a draft notice from the Army.

From California to the East Coast to North Africa to the West Coast of Sicily, he became emerged in the nation's involvement with the Second World War.

He lived in a small tent on the outskirts of Casablanca. He manned tanks in Sicily. He and other soldiers almost sank in hundreds of feet of water when their tanks were placed on a boat that refused to house both people and cargo. It was a rough war, Saenz said, but at least he (thankfully, he said) made it out alive.

Upon return to "the States," little was the same, save the geography and familiar faces. There were fewer instances of Mexican Americans being denied service at restaurants or at libraries or in public space.

"Things got better after the war," Saenz said. "There in McAllen before the war when the first group started leaving, we couldn't get coffee there on Main Street. We couldn't eat in the restaurants. When I came back, everyone would say, 'Let's go there,' and it surprised me."

But Saenz welcomed the changes and he welcomed the Civil Rights Movement that followed. While he didn't engage in any of the political behind-the-scenes, let's-make-our-cause-known activities, he said he supported the courage of those who did.

"The movements had an impact. I would say, 'You guys are doing a good job; just don't sell out,'" he said. "I couldn't join. I had my hands full."

Instead, Saenz devoted his time to his new family – wife Elmerida and the couple's five young children -- and his job with ButterKrust, a local bread producer.

In 1951, he returned to college. At 32 years old, he felt he was ready. He began studying for a degree in education. But after a year, with the news of another child on the way, he knew he couldn't balance work, school and a new baby.

"So I kept on working and I worked at ButterKrust until 1967," he said.

And then employment with the United States Postal Service or the Income Revenue Service seemed attractive. Saenz was eventually employed by the IRS and remained there until his retirement a few years ago.

It was a route he chose carefully, though he advised young Mexican Americans to push further and attain a college degree. "Once you have that piece of paper, all the doors open," he said, adding he wishes he had his own piece of paper to show.

Though Saenz is now retired -- and on sabbatical from his church, where he served as a deacon since 1986 -- he remains active. He spends his time "fighting with my wife," he said with a heartfelt, cough-laden laugh. "Life is good. Real good."

Even when times were difficult, he knew how to smile. He remembers the words his father taught him. "Man does not survive on bread alone." They sure don't, he laughs.

When Saenz was a boy, he was ridiculed and taunted because of his race -- "Hey, Mexican, don't let the sun set on your back here." He recalled, with deliberate pauses, how he almost wasn't allowed to be an altar boy at church.

There is still work to be done, though, he conceded. For some, it is still difficult and prejudice against Mexican Americans remains.

"But I'd say to our people, I'd make them aware that they can succeed but it requires hard work and dedication. Go to school. Stick to the job. And stay off the gangs and drugs, because that's what's giving us the black eye."

Now Saenz thinks back to his father, who taught him never to be afraid of what people think or say.

"He taught me the opportunities were there,'' he said. "I say choose your destiny -- choose the role you're going to follow and then follow it."

Mr. Saenz was interviewed in Austin, Texas, on May 11, 1999, by Jamie Stockwell and Leslie Ann Garza.