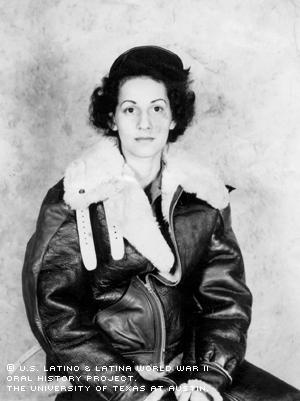 Elsie Martinez saw a lot of World War II, but she never left the country and can't talk about it.

"The things we saw, and the people that came back, it was horrible," said Martinez, recalling her work in a high-security photo lab that processed aerial photos taken by Army reconnaissance.

From her military career, she recalls the hassle of the women's barracks inspections, when sergeants would sometimes test the tightness of the tucked bunk-bed sheets by dropping a quarter on top to see if it would bounce. But she says she learned a lot from the discipline. The lessons she learned in the military stayed with her, from being punctual to helping others to knowing when to do the right thing in civilian life.

Born in San Antonio, Texas, on Feb. 11, 1922, Martinez grew up as the only child of Isabel Tessada. Martinez's father, Josef Harry Schaffer, an Army sergeant, was called into military service overseas when she was 6 months old. This was the last time Martinez was to hear from her father, and doesn’t know the circumstances surrounding his remaining life, or death. Her mother and father were of Italian and French descent, Martinez says, with her father's side of the family of a Jewish background.

When she was 10 years old, Martinez helped Isabel with work at Alamo Potato & Corn Chips Factory, a family business her mother established in San Antonio. Martinez says she loved helping Isabel because she could eat all the potato chips she wanted.

She attended public elementary and secondary schools in San Antonio up to the ninth grade, at which point her mother hired a private tutor to teach her at home. She enjoyed home school, because she left behind an environment where kids were beginning to experiment with alcohol and drugs. Her tutor also taught her interesting skills, like how to be an interpreter and businesswoman, Martinez said.

Seeking to escape the increasing development of San Antonio, Martinez moved south to Laredo, Texas, with Isabel in 1941 to live with Martinez’s grandmother.

While still in San Antonio selling the house and moving the last pieces of furniture to Laredo in December of 1941, Martinez remembers eating breakfast and hearing President Franklin D. Roosevelt announce the Japanese attack on Pearl Harbor.

She was 19 at the time, and couldn’t join the Army until she turned 21. After working at Firestone in Laredo from 1941 to 1942 and holding a few other jobs, Martinez began helping Mrs. Charles Richter recruit young women for military service in the Women's Army Auxiliary Corps. By the time she was 21 years old, Martinez enlisted in the United States Army Air Force, and joined the WAAC (which later became WAC, the Women's Army Corps).

After a three-month training period in Arkansas, Martinez graduated and was sent to a high-security base in Pueblo, Colo. She says she enjoyed basic training, though she wasn’t used to getting up at 5 a.m. every morning to march, do calisthenics and still be alert to start work at 7 a.m.

Martinez began work in the Pueblo-based photo lab as soon as she arrived, and remained in the lab for the duration of her service. Along with three other women, she worked with eight men to develop aerial photographs taken by Army photographers, learning how to enlarge or shrink the film, print it and turn it over to the Army for a range of classified purposes. She also acquired the skills to take pictures for the Army, though she says she’d rather forget the nature of the photographs.

In a voice rising with animation, Martinez recalls the long, olive-colored GI underwear the women in the WAAC were given to wear, along with olive stockings and brassieres. As a remedy to the discomfort caused by the Army-issued clothing, her aunt, who owned a department store in Abilene, Texas, would send her nylon stockings to wear and comfortable underwear to put under the GI brand.

In November of 1945, after three years in the Army, Martinez was discharged as a corporal, receiving the WAAC Ribbon and insignia with the head of Pallas Athena, the Greek goddess of wisdom, victory and craft.

After traveling for four weeks in Washington, D.C., and spending a few months in Georgia, she came back to Laredo, where she worked for one year before moving to Mexico City. There, she stayed with an aunt while attending El Colegio de México, paid for by the GI Bill. She studied Spanish for three years, with the intention of becoming an interpreter in Mexico. Martinez would occasionally go with her aunt to a local meat superstore in Mexico City, where she met her future husband and owner of the store, Pablo Martinez. They were married March 26, 1952, and Martinez decided to become a full-time wife and mother.

After their fist son, Ignacio, was born in 1955, the Martinez family moved back to Laredo. They eventually opened another meat market, with Pablo as Master Butcher, and Martinez making cakes for neighbors and sewing dresses for children to make extra money. The couple had two more children, Jaime and Selma, in 1957 and 1959.

Martinez closed the meat market in 1988, and, after her husband's death in 1994, moved in with her daughter, enjoying the company of her grandchildren. She now volunteers at the Veterans Clinic in Laredo, and has received an award for performing more than 1,500 hours of volunteer work.

Mrs. Martinez was interviewed in Laredo, Texas, on September 28, 2002, by Raquel C. Garza.