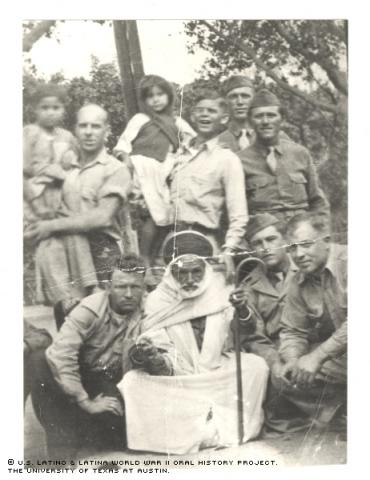 Elizabeth Garcia, who stayed home and worked while her husband was away serving in World War II, feels that the best career she could have is helping others.

Garcia has spent her life working to take care of other people. Born Elizabeth Ruiz, she and her seven siblings grew up in Austin. Both her parents were from Mexico: her mother, from Monterrey and her father, from Jalisco. The family spoke Spanish all the time.

She and all of her sisters and brothers went to Our Lady of Guadalupe Catholic School in East Austin. They attended mass every morning, as well as Sunday, and learned to speak English.

"The sisters, for us to improve our English, they used to punish us in recess time if they heard us speaking Spanish," she said. "They would put us in time-out."

In time-out the nuns would keep them from going outside, or would forbid them to speak to other students for the duration of recess. At home, however, her parents encouraged the children to speak Spanish by consistently correcting their grammar.

Religion was a guiding force from which her mother and father raised their children, she said.

She grew up in a neighborhood in East Austin on East Third St. in a mostly Hispanic community. Religion played a very large part of her life. Along with her seven sisters and brothers, she participated in youth and entertainment groups with her church.

Her family was close-knit: every night they would sit at a table and eat a meal together that often consisted of meat, rice and beans. Every birthday was a celebration. Her mother would make a piñata by wrapping newspaper around an empty oatmeal box and then and covering it with crepe paper that she had cut into strips. She would then cut streamers to hang down from the bottom and fill it with candy. After about two to three hours of work she would hang the piñata with a piece of wire, dangling it so that kids could hit it and break it open. She would also make a two or three layered pound cake and a big dinner of chicken and molé (a spicy, thick gravy), rice, potato salad and beans. Aunts and uncles would come join the family and all would celebrate.

Each year on September 16, Mexican Independence Day, Elizabeth Ruiz's father would get a holiday from work and the family would spend the day together. Her mother would make the girls new dresses and her father would rent a car for the day to drive three miles to the festivities. The family would meet with friends to watch the singing and dancing at the different booths at Zaragoza Park.

In 1944, she was introduced to Willie Garcia by a friend of hers. He was a Marfa, Texas, native stationed at Camp Swift. They dated for about three months. Two days before he was to be sent overseas for military duty, he asked Elizabeth Ruiz if she would marry him. Initially she said that she would rather wait, but when he persisted, she agreed. She explained, saying that he was afraid that if they waited to get married, she would marry someone else.

Her mother sent her to pick out a white dress for the wedding, and the two were married by her Catholic priest in Our Lady of Guadalupe Church. All of her uncles, aunts and godparents attended the ceremony. Afterward, her mother arranged a big party with musicians and an orchestra and everyone danced.

After the party, Willie Garcia returned to the base at Camp Swift. The next morning he flew to New York where he would stay until he was shipped overseas. He was stationed in North Africa and Italy before he returned to Austin.

The War's Toll on the Garcias

While her husband was overseas, Elizabeth Garcia lived with her mother and father and worked at a cleaners. Garcia said that her mother believed that once a girl was married, she did not need to go out with friends any longer. So instead of going out with friends Garcia stayed at home with her parents and saved the $15 a week that she made.

The war took its toll on Willie Garcia: only six months after he was sent overseas, he returned from the war "100% disabled," suffering from post traumatic stress syndrome, also known as shell shock. He had been stationed where the battles were in North Africa and Italy. His job had been to take ammunition at night by train to the men on the front lines. He was then supposed to rest during the day. However, because of the war going on, he always had trouble sleeping. Once he returned home, the trouble continued. He would hear train whistles coming in his head. He would imagine that the environment he had left overseas still surrounded him.

"The stress was so bad he couldn't eat, he couldn't walk, he used to scratch himself [on the face and arms] and he used to hear voices," Garcia said, adding her husband stayed in the hospital for an entire year before she was able to bring him home.

When Willie Garcia was discharged, he was brought home, but doctors advised his wife not to live by herself with him because they were afraid he would get violent. The two lived with her parents for five years. Garcia said that her husband never had a violent attack. The couple used the money they received from the government to help her parents pay bills.

After five years, the two moved into a home they built and Willie Garcia began working as a tailor at Joseph's Men's Wear, a store that sold suits for men. They did not have a car, so they rode the bus to and from wherever they needed to go.

Garcia said that life with her husband was different for her after he returned. She said that he was not himself. She had to learn to be very patient and to understand that he was not the same person she had known before the war.

Adjusting to Life After the War

After the couple moved to south Austin, they got very involved with San José Church. They also began fostering children who needed a home. They fostered four children before they decided that they wanted a baby of their own. Garcia said that she wanted a big family very much. However, because of the electric shock treatments Willie Garcia received in hospital, the couple was unable to have children of their own. They then decided to adopt two girls and dedicated their lives to raising them.

Garcia said that she worked hard to give Ann Marie and Elizabeth, her two adopted girls, the life that she did not have growing up. As far as material things, her daughters got cars when they were seniors in high school.

She laughs when she describes how she had to remind them, when they continuously asked for presents, that she could not give them everything.

Garcia made sure that her girls never had to do the cooking and cleaning that she and her sisters had to do. She felt that her parents pushed her sisters and her to do chores that took all day to complete. Garcia said that she had to sneak out in order not to have to wash dishes all day long. Looking back on this, she decided that she wanted her daughters to be able to avoid this unpleasant experience. She said she felt they would learn to take care of cooking and cleaning eventually. She did not feel it was necessary to push them to do it while they were young.

As of 2005 the Garcias, then 84 and 80, were residing on a ranch in Blanco where they raised goats and chickens. They were very involved in the Blanco community, regularly attending mass and visiting with fellow parishioners.

The couple's daughters, Ann Marie and Elizabeth, both lived in Austin. Ann Marie worked for Cima Strategies as an executive assistant and Elizabeth was a director at San Juan Diego Catholic High School. While both of the girls have families of their own, they remained close to their parents.

"We have been lucky that God has given us a long life," Garcia said, reflecting on their lives.