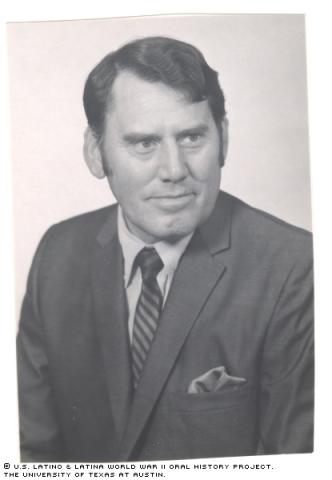 Deep blue, purple, coral. Even 60 years after Jesse Guajardo served in the Navy the colors of the seas and oceans he traveled still strike him.

"I went to the Pacific, the Pacific is blue," Guajardo reminisced at his home in East Austin.

"You get down to the Coral Sea and it's just like somebody is drawing a line just like this right here," he said, drawing an invisible line in the air, to show how definite the change in the color of the water was to him.

"It's amazing how that water stays in that particular section. That color on this side (is blue), other (red) color here (on the other side)," he said. "And after you cross the Coral Sea then it changes back to blue. And then the Indian Ocean is Purple."

Guarjardo still loves the sea, but with it comes powerful memories of the burials at sea of dead servicemen.

"They wait until sundown," Guajardo said. "They stop the ship and then they make the carpenter makes boxes -- wooden boxes. And then they put those big chains, anchor chain links, weights inside of them... when they put 'em over the keel of the ship, they'd just slide down and sink into the water."

But Guajardo survived to return to his native Austin, along with his brother Emilio, who served as an Army medic. Emilio enlisted after the Japanese bombed Pearl Harbor. Guajardo said his experiences changed his life.

"I grew up ... when I got out I felt like I was more a man than when I went in," he said. "I was just a kid that wasn't out of the premises of the house so I learned a lot and it was a great experience for me."

Guajardo grew up in the Austin area, the son of a farmer and the youngest of 11 children. It was in these early years when he began his training for his future career in the grocery business. His brother, Eloy, delivered vegetables and meat to homes around the University of Texas at Austin - including some of the sorority houses.

"He used to also have a bell in front of the seat you know, a copper bell, real pretty bell," Guajardo said. "I wanted it but I couldn't have it. Anyway, I'd ride with him and we'd go by through the alley, we'd ring the bell and the customer's would come out to the alley and wait and they knew what they wanted and what he had for them so that's what we did most of the time. Plus then if they needed something special for a party or something, they'd order meats and we'd deliver to them."

But Guajardo's future in the grocery business would have to wait.

Guajardo was drafted shortly after he turned 18. Nov. 11, 1943, he remembers clearly, more clearly than the birth dates of any of his siblings.

An 18-year-old kid who had never been away from his family or its strict rules was sent off by himself to San Diego to learn how to shoot anti-aircraft guns.

"How to fire it, how to disassemble it, where to point it," he said, about what he learned. He also became familiar with all kinds of guns, but especially the large anti-aircraft guns.

Before long, only two weeks, he was assigned to the M.S. Pennant, a transport vessel. From here he would travel to New Guinea and Leyte. He would eventually become a petty officer and become a crew member on the aircraft carrier the U.S.S. Lexington.

As a petty officer he led a gun group. He had to make sure they kept the gun clean and practiced so if they were ever to be in combat they would all know exactly what to do.

That day for combat would not be far away for Guajardo and his gun crew of eight, including himself. It was while he served on the "Lady Lex" where he would confront the enemy.

"You really don't think about anything other than doing your job," Guajardo said. "You just concentrate on what you're doing."

Guajardo served as a petty officer on this aircraft carrier, the U.S.S. Lexington.

The Lexington cruised into Manila Harbor, between the islands of Bataan, where General Douglas McArthur was being picked up, and Corregidor. And that's when the raid started. Guajardo can remember seeing at least 30 Japanese planes and the tracers that splashed in the water.

It was already getting dark and Guajardo said he and his group could not see very well. They also could not tell who exactly was firing because of cannons on the shore of Manila Harbor.

But this was only a raid that lasted about 30 minutes. It was soon over as the war would also be.

Guajardo was on a ship outside Sabu when victory in the Pacific was announced. V-J day.

"And we were anchored out in the bay and you could just see the thousands and thousands of Japanese coming down from the mountains with flags, surrendered," Guajardo said. "That war was over."

Guajardo was then able to return the United States. He still remembers the welcome he and the other sailors received and the view when they came into San Francisco.

"We had a very nice welcome, especially coming in under the Golden Gate," Guajardo remembered. "You stand up in front of the bow, lined up with all your dress suits on. It's a beautiful sight, beautiful sight coming into San Francisco. I never forget that. That's why I love San Francisco so much. I never get enough of watching the bridges and the water and...I don't know, it's just a very picturesque city to me."

He was discharged in New Orleans, Louisiana. He then returned home to Austin where he married Maria Amalia Rios on July 31, 1949 and had two sons, Hector and Robert.

He would also go back into the grocery business. He worked his way up and became a manager at an HEB store, one of the first, or perhaps the first Hispanic store director in Austin. After he retired from HEB, he worked for his niece for two years at Galindo Tortillas. Because that job was taking up too much of his time, he decided to get a state job. He was hired as a food purchaser for Texas Union Dining at the University of Texas at Austin.

"But I was very happy and they were very happy with me," Guajardo said. "That was the best job I ever had. I said I wished had had better sense and instead of going into the grocery business I'd a gone and gotten this job with the state."

Guajardo still loves the sea and every year he returns to the Californian coast to go sailing with his nephews.