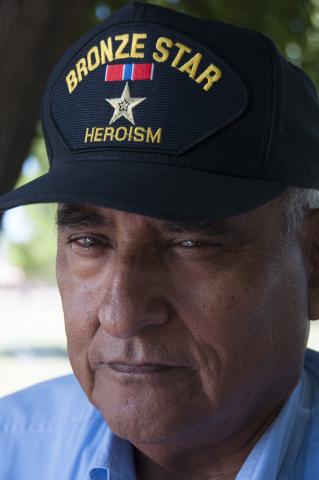 “All gave some, some gave all” is an old adage that captures the sense of duty and honor Eduardo M. Fierro felt about his service in Vietnam.

Around noon one Sunday in May 1968, while on a sweep-and-destroy mission, his Army platoon was ambushed by a company-sized element of the Viet Cong. Part of Fierro’s right arm was torn off in the firefight, and he was wounded in his right thigh.

It was the Battle of Tay Ninh, the first time that Fierro actually saw the elusive enemy. As he lay wounded, 90 minutes into the battle, two Viet Cong soldiers tried to drag him away from his platoon.

A helicopter took Fierro back to base camp. He would lose the rest of his arm and suffer flashbacks for years after his brush with death.

His wife later helped him to finally open up about his post-traumatic stress disorder and the guilt he felt about surviving an attack that killed many other U.S. soldiers.

"After the years, with the support of my wife, she helped me to start talking to other people it," Fierro said.

Eduardo Monclova Fierro was born Oct. 17, 1946, in Alpine, in far West Texas. He was the son of Nieves Fierro, a laborer, and Agapita Monclova, who stayed at home taking care of Eduardo and his five older siblings. Two of his brothers served in the Korean War.

Fierro was already married to his high school sweetheart, Olivia Ramos, when he was drafted in May 1967 and sent to Fort Riley, Kansas, to train as an infantryman. He was assigned to Company A, 3rd Battalion, 47th Infantry Regiment, 9th Infantry Division.

His wife did not want to him to go to war; he wrote her almost daily when he was in Vietnam.

He recalled his first night at the base camp in Vietnam. He was assigned to guard the perimeter and did not sleep all night.

He still has flashbacks to the May 1968 attack that nearly took his life. After he was medevaced to safety, he was taken to Cam Ranh Bay and then to a series of military hospitals. His last stop was Fort Sam Houston in San Antonio, where doctors amputated what was left of his right arm.

Eventually, Fierro began to talk about the nightmares and flashbacks that continued, almost nightly. The nightmares were a byproduct of the guilt he feels for being alive, while the majority of his platoon died in Vietnam.

"Mostly in WWII, Korea, when you went and fought out and you were in a battle, you always had a front. It was territory that you had gained. You left your troops there and that was in control of the U.S.,” said Fierro.

“In Vietnam, it was a completely different situation because they would take you out to fight a village. You would fight the Viet Cong in the village, and then they would pull you out and you wouldn't have control of the village. So the Viet Cong overnight would go ahead and reinfiltrate into that (village) ... In a sense, why fight them there in the first place?"

His experiences in the war made it difficult for him to transition back to civilian life.

"I had too many flashbacks from the war in Vietnam,” said Fierro. “I had to cope with trying to do things that I had taken for granted before with just one arm."

"Everyone that came back from Vietnam seemed to be having the same kind of problems. We're still fighting to get those problems corrected."

The only place that would hire him after the war was Big Bend National Park, not far from Alpine, where he worked as a store and mail clerk. He then returned to Alpine in the insurance business, managed a Dairy Queen in Marathon and finally owned a restaurant in Alpine. He retired from that job in 2007.

With the country in turmoil and many Americans disenchanted with government at the end of the Vietnam War, Fierro said, people were indifferent to him when he came home, like “he had never been to Vietnam.” Nevertheless, he advises other Latinos to do everything they can for their country.

"I am a strong believer of my country and my freedom, and we should do everything we can to preserve our freedom in the United States," he said. “I think that all Latinos should participate in some kind of military experience."

Despite all that happened to him, Fierro said he would not change anything about his experiences in Vietnam.

Edurado Fierro was interviewed by Frank L. Hernandez in Alpine, Texas, on Aug. 3, 2010.*