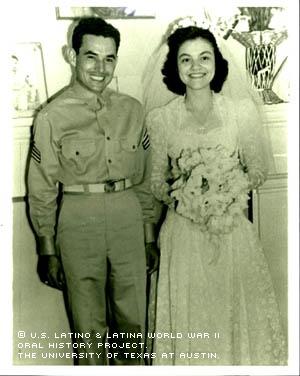 During the span of a 27-year military career, Edelmiro Vidaurri has worked on the aircraft used to fight three wars. In the course of those conflicts, he saw change both in the technology of aircraft and the attitudes of his fellow soldiers.

Compared to the Cold War conflicts in Korea and Vietnam, Vidaurri said World War II brought Americans together. Both Korea and Vietnam were different because they didn't have the nation united behind them. While he respected the decisions of the American leaders, Vidaurri said the Korean War was a policing action and that political concerns restrained the military's ability to wage an effective war.

Social unrest at home during Vietnam was apparent in the young servicemen he worked with. The change in attitude bothered him so much that he sought early retirement in 1968.

"They were just going in to the service to fill in their military obligation," Vidaurri said. "When you're working with sophisticated aircraft, you don't want those kind of people with you because there's no room for mistakes."

An auto mechanic before he enlisted in 1937, Vidaurri's first military assignment was with the 15th Field Artillery Regiment at Fort Sam Houston. His aptitude for mechanics, however, made it possible for a transfer into the Army Air Corps in 1940. The AAC became the Air Force in 1947.

After the war began, Vidaurri married Martha Ortega, who he’d met when his father, a Methodist minister, was preaching in Austin.

In 1943, soon after the couple had their first child, Abel, Vidaurri was assigned to Reykjavic Air Base as an aircraft supervisor in Iceland. There, the Allied planes would refuel, get any needed repairs and fly on to England. Vidaurri's job was aircraft mechanic.

Largely dependent on goods and military support from England, Iceland was left vulnerable to the threat of German U-boats. President Franklin D. Roosevelt sought to keep the island an allied stronghold by including it in the U.S.’ sphere of influence.

Far away from the heat and vegetation of Texas, Vidaurri said he missed his family but that life in Iceland wasn't bad. As relief from the desolate terrain of Iceland, a friend in his unit painted the recreation area with exotic landscapes far removed from what they saw every day.

"In the day rooms, he painted pictures of horses and elephants and something with a lot of vegetation, because Iceland is just a bunch of ice and rocks and lava beds," Vidaurri said. "He painted scenery of trees, water, streams and things like that."

Vidaurri said that while he was in Iceland, he met only one other man who spoke Spanish, and that they would seek each other out to speak together. This was frequently the case throughout his military career. While Vidaurri and his wife spoke both English and Spanish, when he was stationed at bases throughout the U.S., he was often the only Mexican American in his unit and his six children primarily spoke English.

Growing up during the Great Depression meant Vidaurri was no stranger to hard work. Whether selling newspapers, pumping gas at filling stations after school or hauling produce to area farmer's markets, he and his brother contributed to the family finances to make it possible to live comfortably.

Although times were hard and work was scarce, Vidaurri said his family were relatively secure. As a Methodist minister, his father took the family all over Texas to preach to the small pockets of Latino Methodists within those communities.

Vidaurri said that when he attended high school in Houston, Mexicans and other Americans were all mixed together and got along well; however, he also recalled some ways Mexicans were discriminated against before the war.

Vidaurri retired as a Master Sargent after a career working on airplanes ranging from the AT6 to B52 and KC135. He said he grew to admire airplanes over the years and that his career in the military has treated him well. Now, living in Austin again, he said he’s glad to have had the opportunity to travel.

"I liked to see the rest of the world, and we are very fortunate to have the United States," Vidaurri said. "People don't know how fortunate they are until they go to other countries."

Mr. Vidaurri was interviewed in Austin, Texas, on December 9, 2001, by Michael Taylor.