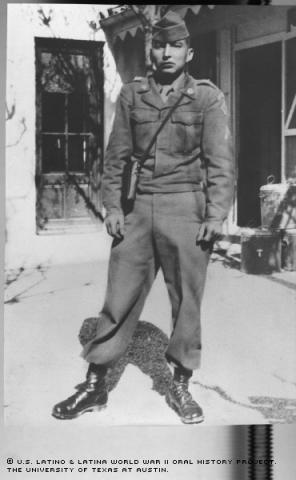 Eddie Sanchez was 17 years old when he saw the reality of war in Utine, Italy, in 1945. Horrified, he left camp without permission -- absent without leave, or AWOL. That act changed his life, as punishment was kitchen patrol duty. Before long he was running the kitchen and on his way to a distinguished 31-year Army career in Food Services.

Sanchez had not yet mapped out his future growing up in the laid-back Austin, Texas, of the ‘40s. His grandparents had long since moved from Mexico to the South Texas gulf town of Port Lavaca, where Sanchez's U.S.-born parents were raised.

When he was a teenager, his parents moved the family to Austin, where they opened a dry cleaning business on the predominantly Latino east side of town. Sanchez and his four brothers and three sisters worked in the family business. He was up every morning before school and off to the dry cleaners, cleaning and pressing clothes by 6 a.m. He worked again after school to earn money.

"In those days we used irons and ironing boards at the cleaners. I made $4 or $5 a week. It was good money," he said with a smile.

A weathered, handsome and gray-haired Sanchez recalled life before the war. Swimming in Barton Springs' icy water was the best way to entertain yourself on a sweltering summer day.

"You could rent bicycles back then and ride all over the place," he said.

Sanchez had a car when he was 15; drive-in movie theaters were another favorite pastime during those days.

"It was an old car, but I had a car," he laughed. They had a lot of friends and enjoyed being a community of both Anglo and Mexican Americans teenagers. "You didn't see much discrimination back then. I felt like I was just an American."

The country was still coming out of the Depression and the Sanchez family struggled. His mother, Angela Longoria Sanchez, spoke English mainly to the family. She left the family dry cleaning business to become a seamstress for Merrit, Shaefer and Brown in downtown Austin. After working long hours there, she would bring clothes home in the evenings to make extra money. The Sanchez sisters would often cook dinner for the family while their mother sewed.

Although Sanchez never traveled to Mexico other than to the border towns, the family made frequent trips to Port Lavaca, Texas, to visit grandparents and cousins and friends in his father Martin Sanchez's car. Along the way, they visited relatives in other towns. Fishing was the family's pastime and many a happy memory was made during those simple times.

"We were raised on seafood actually," he recalled.

Those peaceful days soon came to an end when the two older Sanchez boys were drafted into the service; Angela wasn’t happy to see her sons head off into danger. Sanchez’s oldest brother, David, went in 1943; his next brother, Eloy, went in 1944.

Soon Sanchez followed. Only 17, not yet finished with school, he joined the Army in 1945. The plan was to enlist since the draft was imminent. He chose artillery, but the Army had other plans for him.

Sanchez was inducted at Ft. Sam Houston in San Antonio, Texas. After staying there about a month, the Army sent him to Ft. McClellan, Ala., for infantry training. Although this wasn’t what he’d chosen, he quietly resigned himself to his fate. After three months training there, he returned home to Austin for 22 days. A train ride later, he reported to Camp Kilmer in New Jersey for embarkation. The young private was now making $22 a month.

"By the time you paid the laundry and buy what you needed, if you had $15 left, that was too much money," he recalled.

It was August of 1945 and he was headed to Frankfurt, Germany, by ship, and then on to Italy.

The war was waning. The Allies had broken through German defenses in Italy in May of 1944. Rome had fallen, but the Germans held their positions in northern Italy through the fall and winter. The Allies swept toward the Alps in the spring and the German forces surrendered in Italy on May 2, 1945. Mussolini had been captured and shot by Italian resistance fighters on April 28. Sanchez's first duty in Italy was "clean-up," picking up dead bodies and retrieving the dog tags.

"You get used to it. There's nothing you can do. It's a job," he recalled.

It was here that the restless Sanchez was given yet another tour of KP duty after a brief stint AWOL. But a kindly mess sergeant took an interest in him and offered him a chance to become a dining room orderly, or DRO. Before long, he was off to cooking school in Utine, Italy, for three months. From there, he moved on to baking school, and finally to kitchen-mess management school.

He rose through the ranks from corporal to buck sergeant and then he set his sights on his mentor's job.

"’Sergeant, I'm going to get your job,’ I told my commanding officer," Sanchez recalled. "And you know what? Before he retired, he put me in for his job and made me a tech sergeant.

Sanchez was overseas for four years. His duties as mess sergeant kept him in the office overseeing the menus, the cook's worksheets and the shift leaders. His administrative work included planning the menus, ordering and tracking and organizing the kitchen operations.

Sanchez was strict with his staff and wouldn’t tolerate shortcuts. He regularly attended school to update his skills to stay current with the government's ever-changing rules and regulations. Sanchez traveled extensively doing TDY (temporary duty) and teaching what he’d learned.

But when his enlistment was up the first time, he was anxious to try civilian life and returned to Austin. That was short lived, however.

"In those days, you had 90 days to reconsider. You could return with the same rank. I rejoined and reported back to Ft. Sam Houston," Sanchez said. "After that, they (the Army) used to bring me my reenlistment papers. They'd come to the mess hall and say, 'sign here.' I'd say, 'fine.'

"I just signed it," he recalled. "They put me down for 6 years each time."

Sanchez and a previous wife and children, Eddie and Yolanda, became accustomed to moving around. Through the Korean War and Vietnam, Sanchez remained in the Army, narrowly missing being shipped out to both countries during those times of crisis.

After 31 years, he finally retired, returned to Austin and entered the civilian workforce. He worked with his brother laying carpet, remodeling and doing odd jobs before going to work for IBM in their food service department. He worked there until an injury forced him to retire at age 62.

Sanchez may be officially retired, but volunteer work keeps him a busy man. At age 72, he’s commander of the Catholic War Veterans Post on South Congress Avenue in Austin. His wife of seven years, Manuela, is the treasurer. They stay busy raising money for local scholarships. He still has his recipes from his Army days, and they use them when they cook at the Post for benefits.

"My big brother belongs to the Post. He cooks, makes hamburgers. I tell him what to do,” he said with a laugh. "I've got to stay busy. Sometimes I get up at 4 in the morning. That's why I wash and cook and bake a cake or something."

His five grandchildren also keep his days filled with activity. Looking back on his happy life, Sanchez doesn't have many regrets. He’s an optimistic man who encourages today's youth to go to school, work hard and study history. Although he didn’t experience discrimination during his long Army career, he says it did exist. He values the changes that have come along with the years.

"It doesn't make any difference what color skin you are, you've just got to be together," Sanchez said. "That's the only way we're going to make a good world."

Mr. Sanchez was interviewed in Austin, Texas, on February 9, 2002, by Vicki Lamar.