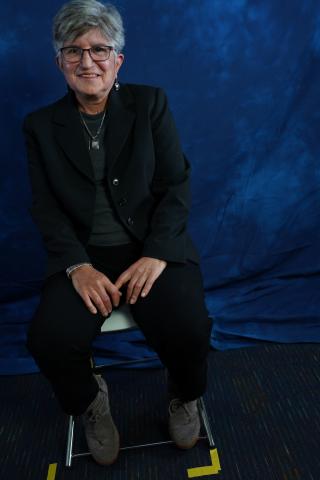 Diana Fernandez was born in 1950 in Corpus Christi, Texas. She grew up in a newly developed, integrated neighbored designed to serve people working at the Navy base. Pursuing higher education was not a continuous topic of discussion in Fernandez’s household but it was expected of her and her two sisters. Living in an integrated neighborhood allowed Fernandez to also experience that same integration in the classroom at Incarnate Word Academy. The all-girl school included students from nearby cities. Fernandez says having integrated schools is something that is still difficult to implement due to redlining and economic segregation. After graduating from Incarnate Word Academy in 1968, Fernandez went on to pursue higher education. She attended Del Mar Community College for two years in Corpus Christi and would finish in 1970 with an associate’s degree. After attending Del Mar, she enrolled at Texas A&I and graduated in 1974 with a master’s in government and history. Texas A&I would become a way for Fernandez to learn about her identity and history. Del Mar was not as focused on Mexican American culture in the way Texas A&I was. After graduating with her master’s in government and history from Texas A&I in 1974, Fernandez went into city planning for the City of Corpus Christi. Fernandez belonged to a variety of organizations. She did activities alongside the Raza Unida Party when it was active and marched with the United Farmworkers' Union to the capitol in Austin.