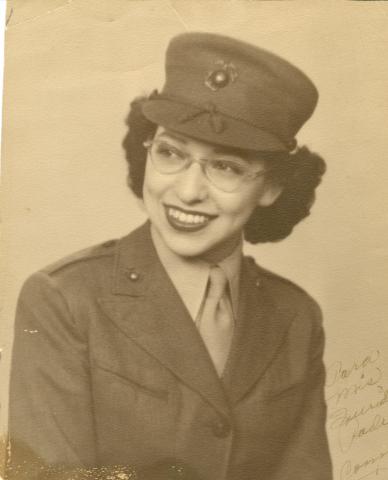 Consuelo Hartsell grew up in Rawlins, Wyoming, in the only Latino family in a small town where the neighbors included Scandinavians, Greeks, Japanese and one African-American family. It was not until her last year of high school that a few more Latino families started to move in.

Her parents, Francisco and Carmen Macias, had eloped as teenagers, and moved from Texas and eventually to Wyoming to work in the beet fields. “They were just playing it by ear, I guess,” she said.

The young couple put down roots in Rawlins, which then had about 5,000 inhabitants. The Maciases eventually had seven children -- five girls and two boys. Consuelo, their third child, was born Nov. 20, 1922.

Consuelo and her older sister, Juanita, found their escape from small-town life first in Waco, Texas, and then as enlistees in the Marine Corps during World War II. Four of the Macias children eventually became Marines.

Consuelo recalled her childhood in Rawlins, sharing Cinco de Mayo celebrations with their Greek neighbors and meals with the Nagatos, a Japanese family. Her older brother, Lewis, even learned some Japanese from them, which helped him when he became a Marine in the Pacific during the war. “On the battlefield, they would have him behind the lines and he could hear them [the Japanese] talking. He picked up what they would say, and he would radio back what they were planning on doing. So that was a huge plus,” Hartsell said.

She also recalled that the Nagatos “literally disappeared” before Pearl Harbor and assumed they had returned to Japan.

When the attack happened, “We didn't know what to think because war was foreign to us. Mom was worried, concerned about my brother,” she said. ”A lot of the men, from my class especially, were being drafted.”

When Consuelo graduated from high school in 1942, there was nothing for her to do. “I was so bored,” she said. So she got her parents’ permission to join Juanita, the eldest of the Macias children, who was living in Waco, drawing aerial maps for Braniff Airlines. When Braniff moved to Dallas, the sisters followed. Consuelo Macias got a job selling “gloves to the rich ladies” at Neiman-Marcus. Within a month, she was bored.

“This is ridiculous,” she said to herself. “I’m joining the Marines. I’m sure they’ll find something for me,” she announced to Juanita. “The next day, she said, ‘That’s a good idea.’ “

In the fall of 1944, the Macias girls enlisted in the U.S. Marine Corps Women's Reserve, which had been created in 1943. They were sent to boot camp at Camp Lejeune in North Carolina. As far as they knew, they were the only sisters and the only Latinas in the camp.

Since there was no need for Women Reserves overseas at that time, the sisters were given the choice of going to San Francisco or shipping off to Hawaii. They opted for the former, and both were assigned office jobs at the Depot of Supplies of the 1st Marine Division in San Francisco.

Consuelo was assigned a desk job overseeing supplies shipped to and from overseas, while Juanita did drafting work, working with maps. There were no barracks for the women, so they lived in groups in private homes. For a while, the sisters lived in Pacific Heights, in a house with a view of the Golden Gate Bridge.

Consuelo met her first husband while in the service. On the train trip to California after boot camp, male and female Marines rode in separate cars and were ordered not to talk to each other. But one of the men sent Consuelo a note: “I’d like to meet you when we get off the train.” She ignored it rather than get in trouble. But there was a second note as they got closer to California.

At a later party at the Marine Corps club, she met the sender, Louis Orosz, who asked her to dance. “We danced all night,” she said. Later, they went to a movie.

Consuelo Macias and Louis Orosz married on Dec. 15, 1945. When she got pregnant, she left the service six months early, in August of 1946, with the rank of sergeant. Orosz completed his tour of duty in the South Pacific and was discharged with the rank of staff sergeant on Aug. 22, 1946. Michael Orosz, their only child, was born in 1947. Louis Orosz later died.

She was awarded American Campaign and World War II victory medals, as well as recognition for her honorable service.

As a child, Consuelo had wanted to go to college. “I wanted to be a lawyer because I liked law, what little I knew of law at that time, and I’ve always been interested in politics,” Hartsell said. But that ambition was deferred, first because of the war and later because of motherhood.

After “Mikey” was in school, she decided to look for a job and applied at Hewlett-Packard. After a “beautiful” interview, she landed a job in 1959 as an office administrator. At H-P, she also met her second husband, James Hartsell, a software engineer. They married in 1992.

She retired from H-P after 35 years; the Hartsells live in Sunnyvale, California.

Mrs. Hartsell was interviewed by Maggie Rivas-Rodriguez in Rocklin, California, on March 26, 2015.