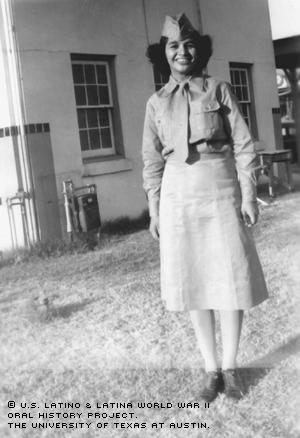 Growing up as the oldest of six girls, Concepción Alvarado Escobedo learned early what it means to take responsibility. Even when she was hardly more than a toddler she helped her mother take care of her younger sisters. Later, she washed diapers, first boiling the clothes and then scrubbing them on a washboard.

It was a harsh reality that demanded sacrifice at an early age. But this early introduction to hard work later led her to develop a strong sense of duty, responsibility and service, traits that served her well during her time in the Women's Army Corps in World War II.

Escobedo was born Concepción Alvarado on Dec. 8, 1923, in Southton, Texas. Soon after her birth, the Alvarado family moved into a small house in San Antonio, Texas, where she attended school and graduated with a certificate in garment manufacturing.

Like thousands of other families, the Alvarados were adversely impacted by the Depression of the 1930s. Escobedo’s father, Paz Alvarado, lost his employment and was forced to take odd jobs to make ends meet.

Escobedo says her family lost everything, even their house and furniture. They moved a few times and had to forgo the comforts of indoor plumbing and a gas stove for the harsh realities of outdoor toilet facilities and an old wood-burning stove.

But what hit Escobedo particularly hard was that she had to leave behind her old classmates at her private Catholic school and enroll in a public school.

She made the best of the new situation and was soon one of the best students in class and competing for the highest grades.

With the help of the Works Progress Association, her father found work again and the family later moved into a better neighborhood. Escobedo says the relief program furnished her and her sisters with clothes and supported the family with groceries.

"They gave us this white sort of margarine, called 'oleo,'" she recalled. "It came with a little package of yellow powder so you could mix it and have it look more like real butter."

Escobedo was still at school when the United States went to war in 1941. She says her fascination with the military began while attending school, where she met young ROTC officers. She liked their uniforms and the idea of drill and organization.

Escobedo volunteered as an air-raid warden in San Antonio. During military air-raid practices, she had to make sure everybody on the block had turned off their lights.

She decided to join the Armed Forces after attending a military rally that promoted women in the service, so she enlisted at Recruiting Station in San Antonio in April of 1944.

"I felt like I should do something," she said. "I felt if I could play some small part in the war, I would want to do it."

She was sent to Fort Orglethorpe in Georgia for basic training, where she was "disciplined 24 hours a day," she recalled. "They would yell at you, as if you couldn't hear. They would yell right in front of your face and have you shaking in your boots."

Escobedo liked the outdoor exercise and enjoyed marching and synchronizing with the rest of the group; she also had to perform household chores and kitchen duties, and got accustomed to the extreme accuracy of military work.

"The beds had to be made up in a certain way," she said. "They would throw a quarter at your bed, and if it would bounce up, then it was well made."

After basic training, Escobedo was transferred to Randolph Field to the Women's Army Corps in San Antonio. Working there seemed "just like a regular job" to her, she said. There, she held a position of file clerk and later was a baker for the WAC unit.

Being the only Mexican-American woman among Anglos was a special challenge for her. Even though she can't remember any discrimination, she says with some of the women, it was tough to get beyond saying hello or exchanging greetings. On the other hand, the encounters with women from all over the country made her worldlier and even more independent.

"The Army opened my mind to other things. When you get out of your own area and your own space, you learn a lot. In our families, the mothers would be very protective. They didn't tell you about things. In the service, they teach you and show you," Escobedo said.

She met her husband, Carlos Escobedo, during a night of celebration at Randolph Field after Germany surrendered May 8, 1945. Six months later, the couple was married on Armistice Day, Nov. 11, 1945.

The Escobedos moved to Harlingen, Texas, but Escobedo recalls giving up her military job reluctantly.

"I would have liked to stay in longer," she said. "I enjoyed my time in the Army."

Her sacrifice for her country was honored with the WWII Victory Medal, Good Conduct Medal and American Theater Campaign Medal. However, not everybody appreciated her war service; it took some time for her to win the approval of people in town.

"Several of the women in the Army had a wild reputation, so people didn't think well of women in the service," Escobedo recalled. "I kind of had to prove that I was a good person, that I was not a wild person."

The Escobedos had five children: three sons and two daughters. While struggling to raise her kids, Escobedo still found time to make use of her GI Bill, attending Beauty School and Business College. She later worked as a bookkeeper and business clerk, helping her husband make ends meet.

After Carlos died in 1995, Escobedo became the matriarchal head of her family. She now holds together a large brood, which has been expanded by 14 grandchildren and five great-grandchildren.

Not surprisingly, Escobedo isn’t an easygoing grandmother who just sits back in her chair and watches the lives of her beloved ones. Until the summer of 2003, she’d been a regular attendant of meetings of the Women's Army Corps Veteran's Association. She also is a member of three other organizations affiliated with the military: the Women in Military Service for America, the American Legion and the Disabled American Veterans.

Mrs. Escobedo was interviewed in Brownsville, Texas, on September 13, 2003, by Sandra Freyberg.