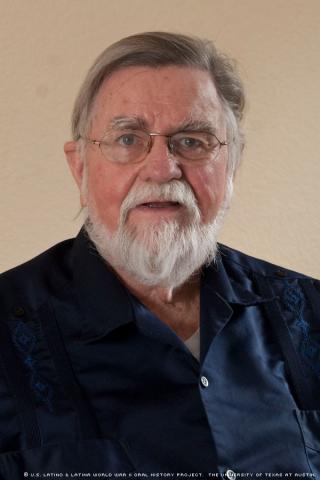 Charlie Ericksen spent most of his adult life creating a strong bond with Mexican-Americans, writing news stories and columns about them, and advocating for better treatment for that community.

During his career, the Chicago-born son of British and Norwegian parents worked for two newspapers in Los Angeles, three television stations and a handful of Latino advocacy groups, as well as the U.S. Civil Rights Commission. Along the way, he also imported piñatas and served in the first administration of California Gov. Edmund G. "Jerry" Brown as chief deputy of the Department of Motor Vehicles.

Ericksen said it was his military service during the Korean War that first helped form his attachment to the Latino community. He recalled that some Latinos were not happy about their sons being drafted.

“When we got called off to camp, a lot of the Latino parents said, ‘Hey you can’t take my son. He’s only 14,’ ” Ericksen recalled.

He said that many of those young Angelenos only went for the uniforms and a paycheck. Ironically, kids who were so eager to serve were also the ones who received the most negative media attention, Ericksen said.“Papers played with military terms to make the soldiers and sailors heroes, and the young Chicanos thieves,” Ericksen said.

It was this discrimination by the press, he said, that led many in the Chicano communities to organize.

For his part, Ericksen joined the 40th Infantry Division of the California National Guard when he was about 22, in order to avoid being drafted into the regular Army. However, the division was mobilized at Camp Cooke, Calif., about 140 miles north of his Los Angeles home. It was deployed to Japan and later Korea, according to the California State Military Museum.

Five months of training at Camp Cooke (now Vandenberg Air Force Base) prepared Ericksen for his first overseas service in Korea in 1952. He was a part of the United Nations forces that backed South Korea against North Korea, which had sparked the conflict by invading the south, and its Chinese ally. Ericksen learned many things in basic training, but one thing stood out for him.

“We were there to save America,” Ericksen said.

During training, Ericksen began as a truck driver but was very quickly transferred to the public information office. A journalist friend from before the war had become a captain in the National Guard with enough power to put Ericksen in the position he wanted.

“It was a pretty good deal!” Ericksen said.

Considering himself an “international columnist,” Ericksen wrote about soldiers from a GI’s perspective. As a National Guard writer, he was able to expand his creative writing skills by covering offbeat topics within the service. Ericksen admitted that sometimes there were no stories available, so he would simply make them up.

“I wrote a fake story about a dog,” said Ericksen. “After my editor was intrigued and wanted to take pictures, I had to kill the dog so no one would know I was lying.”

Other stories were created that could have gotten Ericksen fired from his position in the public information office.

“I always carried around my notebook while we were in Japan, so soldiers always wanted to be quoted,” said Ericksen. “I quoted one guy, and his mom complained all the way from Iowa, saying that her son never went to Japan.”

After wriggling his way out of that inaccurate news story, Ericksen stopped fabricating embellishments.

He said that he took a lot away from traveling to Japan and Korea.

“It exposed me to another culture and another world that I had never experienced in any way. And that was very, very good for me,” Ericksen said.

It was during his time in the military that his attraction for the Mexican culture began; he would receive care packages from home that were filled with Mexican food. He then began covering the National Guard’s boxing team, which was made up mostly of Latinos.

“I just dug those guys. We got along great and bonded well,” Ericksen said.

His writing skills were also appreciated. Ericksen said his interest in writing began when he was in elementary school.

It was that kind of encouragement from his mother, Marjorie Saunders, plus the supportive words from his teachers throughout the years that helped him develop his writing career. Ericksen noticed signs around town for a new paper called the Mirror, which started publishing in 1948. When he applied, he immediately got the job because of his writing skills and interest in offbeat topics, he recalled.

He started as a copy boy, doing the newsroom grunt work, from getting coffee for editors to picking up copy from the reporters. After six months, he was promoted to the Sports department, where he started writing stories about fishing. He knew no one else at the paper was writing about it, and he knew about fishing because he used to fish with his dad off the Santa Monica Pier.

It was shortly after his promotion to Sports that he joined the California National Guard. When it was mobilized, he was glad to know that he would not be unemployed when he returned.

“At that time, there was always a promise the paper would take you back after military service,” Ericksen said.

After his discharge at the rank of Sgt. 1st Class, Ericksen returned to The Mirror and was transferred to work the police beat. It was at this beat that he first developed his passion for supporting Latino rights. He began writing about the less fortunate in the Mexican-American community of East Los Angeles.

He decided to take a one-year leave from his job at The Mirror and take classes at Mexico City College to further his education. Before the war, he had attended Stanford University and graduated with no specific major. The GI Bill later funded his college career. But he dropped out and stayed in Mexico once he realized he was making enough money writing freelance columns for papers in the United States.

“Culture was always fascinating to me,” said Ericksen. “I had the perspective of a young boy with wide open eyes, and they liked that.”

In 1954, Ericksen wrote a ground-breaking series of articles for The Mirror about the U.S. government’s “Operation Wetback,” a concerted effort to apprehend and deport undocumented immigrants. As many as 1.3 million immigrants and some U.S.-born Latinos fled or were apprehended and sent to Mexico. For the series, Ericksen lived as an undocumented worker. He crossed the border from Mexico into the United States and worked on farms in Southern California’s Imperial Valley. He documented the plight of the workers having to evade U.S. Border Patrol agents, having been cheated by farmers, and having to steal food because of extreme hunger.

The series went on to win awards and was nationally syndicated.

During his time in Mexico, Ericksen frequently visited a small coastal village in the state of Oaxaca named La Ventosa.

“I went there initially when I was a student at Mexico City College, and I kept going back sort of as a hippie,” he said. “It was so cheap -- students could afford it. It was a small village of about 100 families, very receptive to anybody … even strangers and young students who drank beer. It was a very giving kind of relationship. It governed itself. It didn’t pay any attention to federal government -- they barely knew where it was!”

It was in La Ventosa that he met Sebastiana Mendoza. They married and had a son in her village. Then she became pregnant again, and Ericksen wanted to move back to the United States to raise their growing family. They had three boys and two girls. The family settled in East Los Angeles.

Ericksen said that police used to beat down Hispanics, which created a lot of negative attention on the Latino community. In one instance, an L.A. County sheriff’s deputy killed his friend, Ruben Salazar, a Los Angeles Times columnist and news director of pioneering Spanish-language KMEX-TV. Salazar was killed by a tear-gas canister fired into a bar by the deputy on Aug. 29, 1970. The popular Mexican-American journalist had gone there to take a break from covering a Chicano Moratorium march against the Vietnam War.

“They said Ruben was too dangerous because the Latinos would start rioting when he published all of these reports,” Ericksen said. “There was a huge difference in the way Latinos were treated in East L.A. and how I was treated growing up in West L.A. It just wasn’t a hospitable place for Hispanics.”

Despite the turmoil in East L.A., Ericksen wanted to be there with his wife because he knew she would feel most at home there. Sebastiana did not speak any English, and Ericksen did not want her to feel isolated in the United States.

Ericksen began to write only about the Mexican-American community.

“I don’t know how I got interested in the Latino culture at that time. Maybe through the military experience and some of the Latino friends I kept after the service,” Ericksen said.

“I reacted, and suddenly I became very popular in East L.A. Latinos would always invite me to their parties because they knew they could send me to the door when the police showed up, and they’d be OK,” Ericksen said.

He and his wife became known in the community and in journalism circles simply as Charlie and Sebastiana. In 1980, his passion for the Latino community led him, Sebastiana, and their son, Hector Ericksen-Mendoza, to start the syndicated Hispanic Link News Service, which was followed a couple of years later by the media-savvy newsletter, the Hispanic Link Weekly Report. “Our philosophy is to expose the Hispanic community in a broader way to an audience, specifically the white audience,” Ericksen said.

Throughout his career, Ericksen continued to work for the rights of Latinos, and encouraged countless young people not only to write, but also help raise awareness of the U.S. Latino community. He received numerous awards and recognition from a variety of organizations, including a lifetime achievement award from the Mexican American Legal Defense and Educational Fund (MALDEF), and induction into the National Association of Hispanic Journalists’ Hall of Fame.

Ericksen said he just considered himself a free spirit.

“I was just an adventurous hippie running around and always ran into people who took pity on me,” said Ericksen.

One of the most valuable lessons he learned was about the importance of journalism.

“If you can write, you can always make a living,” Ericksen said.