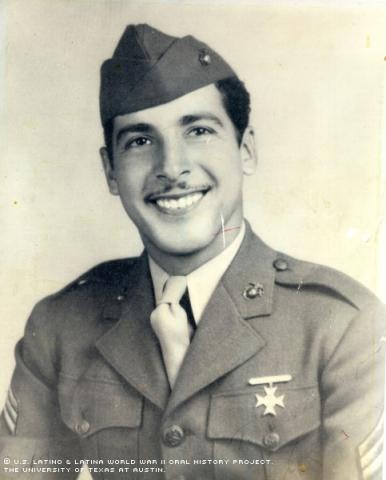 Three weeks after Japan bombed Pearl Harbor, Charles "Carlos" Guerra Samarron, of San Antonio, Texas, joined the fight and enlisted in the United States Marine Corps, beginning a four-year stint in the military and opening the door for a lifetime of memories.

As part of the 3rd Marine Division, 3rd Amphibious Tractor Battalion, Samarron would survive perilous beach assaults on the islands of Guam and Iwo Jima, face down the possibility of invading Japan and exit the war in 1946 with a new perspective on life.

"You know you're mortal and you can die anytime," he said. "I feel more of a kinship with my fellow man than I did before."

The war had changed him in other ways, Samarron said in an interview last summer. He would return and work as a civil servant, monitoring the rights of Latino sailors, trying to further the Mexican American people's stake in the U.S.

Samarron was born in San Antonio in July 16, 1922, but after his father died in a train accident just four years later, Samarron's mother, Elisa Guerra Leos, married Ines White Samarron -- the man from whom Samarron took his last name.

The stepfather brought his wife and her two sons and daughter to San Angelo in 1930, where Samarron would stay until he joined the Marines in 1942.

Because very few Mexican Americans had any kind of education, Samarron said they were relegated to low-paying jobs like cotton picking and sheep shearing.

Growing up with a stepfather who cleaned the insides of train engines at a nearby railroad station, however, afforded Samarron a wealthier-than-average childhood that wasn't shared by many Mexican Americans during the time of the Great Depression.

"Hispanics in those years didn't get choice jobs, believe me," Samarron said. "The majority of Mexican Americans worked in the field, and they had to go where the work was. We were fortunate that my stepfather worked at the railroad, he made good money because he always had a steady job."

Not having to supplement his stepfather's income and help take care of the family with a job of his own, Samarron received an education in San Angelo -- sitting in the same classes as white students and watching the same movies beside them, unlike in other cities across the Southwest.

"We sat right next to the white people at movie theaters and in school," Samarron said. "The ones that were segregated were blacks, so segregation wasn't as pronounced for Mexican-Americans."

In the pre-war years, Mexican Americans in the Southwest often had separate public facilities, including schools. Mexican Americans were constantly passed over for jobs in stores and hotels in South Texas towns, and derogatory names like "pepper bellies" and "greasers" were often heard.

According to Samarron, however, the discrimination emerged from a lower socio-economic class of people in South Texas.

"The name-calling principally came from the poor section of Anglos, and it wasn't the middle-upper class whites," Samarron said. "Whenever I went to school, the whites were nice -- they invited us to their homes and picnics -- only the poor whites called names."

"I joined the CC Corps when I was 16 because I wanted a job, and it was a good way for Mexican Americans to earn money," Samarron said. "You could also get clothing, food and the chance to pick up a trade. You could learn how to build bridges or study forestry."

The Corps, a program that stemmed from President Franklin D. Roosevelt's New Deal outreach, helped find jobs for unemployed Americans, and was instrumental in finding jobs for Mexican Americans.

Samarron left the Corps and returned to high school six months later. In January of 1942, he volunteered for the U.S. Marine Corps, leaving San Angelo and heading to San Diego. For the next 23 months, the Marine Corps prepared Samarron for the war in the Pacific, with basic infantry training and techniques to use during amphibious landings.

"They'd put a pack on you and throw you into a pool, and you'd have to get the pack off before you drowned," Samarron said. "The training was rigid."

But, if the training was rigorous, an entirely new "nightmare" awaited Samarron on the shores of Guam and Iwo Jima.

In November of 1943, Samarron departed San Diego and arrived in New Caledonia, a French port where troops began preparations for the invasion of Guam, an island in the Pacific that the Japanese had captured from Allied forces.

American forces launched an attack on Guam to re-secure the island, and Samarron was part of the beach assault.

Samarron reached the beach via an armored vehicle, where he feverishly began to dig a trench while Japanese mortars exploded all around him.

"It was a nightmare -- my first combat," he said. "You had to dig a hole and hope to God a shell doesn't hit where you're at. Digging a hole, you think it's too small, but when the shells start landing, you think you dug it too big."

As Japanese mortars rained upon the beach, Samarron watched American fighters light up the night sky when they dropped flares into the hills -- spotlighting the locations of Japanese troops for U.S. ships so they could barrage the hills with 16-inch shells.

"We had the upper hand with the ships and planes, and our naval vessels pounded the crap out of them," Samarron said. "By the morning, we had driven the Japanese back."

The Allies retook Guam, and Samarron had emerged from the fighting with his life.

"It never entered my mind that I'd be killed," he said. "When we were in camp, a lot of guys started writing letters to loved ones that said, 'I don't think I'm gonna make it.' A lot of people had premonitions about dying, but I never got that feeling."

Samarron also survived the Battle of Iwo Jima a year later in February of 1945. He was then sent to Hawaii to train for the anticipated invasion of Japan.

"The Japanese were fanatics -- they were never gonna give up -- so just how many lives were we going to lose trying to land on Japan and capture it?" he said. "We were elated when Japan got bombed."

After the U.S. ended WWII in 1945 by dropping nuclear bombs on Hiroshima and Nagasaki, Samarron was discharged in January of 1946 -- and his new status afforded him greater opportunities back home.

"As a veteran, you have equal rights like everybody else, so it gave Mexican Americans new opportunities to go back to school or get benefits," Samarron said. "It gave us a feeling of being equal."

Returning to San Diego, where his family was located after following him there in 1942, Samarron enrolled in San Diego Junior College, but didn’t graduate.

Instead, he found work at the Federal Civil Service, where he spent the next 30 years as a deputy equal employment officer for the Navy.

In addition to hearing and resolving complaints, he was in charge of examining each unit and exploring the reasons why there were few Latinos enlisted.

"It was just a question of recruiting those who had the wherewithal," Samarron said.

At the same time, he began his work with the Navy; Samarron also became actively involved in the American G.I. Forum, a veterans organization dedicated to securing rights for Mexican Americans in both the workforce and education.

"Our local chapter tried to find all the returning Mexican Americans still looking for jobs or job training and get those people jobs," Samarron said. "We established communications with the powers to be -- the mayor, city council and people who knew the inside-outs."

Even though Samarron has retired from both his profession and community service, he still harbors strong feelings about Mexican American involvement in society.

"There's always gonna be a need for Hispanics to have a voice and express their concerns," he said. "The best thing to do is get educated and try to do something with your life that's beneficial not only to you and your family, but also to your community."

Mr. Samarron was interviewed in San Diego, California, on August 8, 2001, by Rene Zambrano.