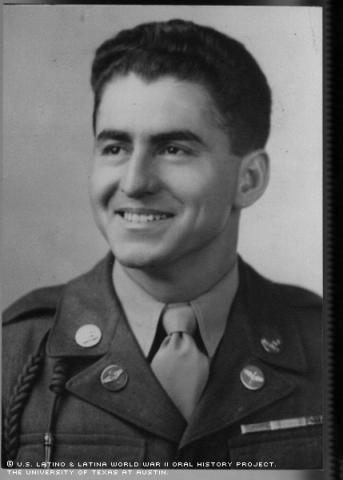 Rodriguez went in willingly, volunteering to serve his country; in the course of his tour of duty, he risked his life and was awarded a Purple Heart.

Speaking from the dining room at his South Austin home, Rodriguez discussed his life before and after the war. His wife, María Elisa Reyes Rodriguez, sat by his side and helped fuel his memory. A well-groomed man, Rodriguez maintained a serious demeanor and kept his answers short and to the point.

Rodriguez began working at age 15 on his father's farm while attending Navarro Elementary School in Lockhart, Texas, 32 miles south of Austin. Rodriguez was open to any form of work he could find, including cleaning garments for a dry cleaner's, but only on the weekends because the business could only offer him those hours. Work was hard to find because the country was just coming out of the Depression at the time.

In 1940, Rodriguez volunteered for the Army at age 20. He walked into the recruiting station not only because he wanted to serve his country, but to help his family out financially. He did his basic training at Fort Sam Houston in San Antonio, Texas, and was accompanied by one of his younger brothers, Edward, who joined six months after him. At Fort Sam Houston, entertainment wasn’t hard to come by: The nights were filled with traditional Mexican music provided by some men who played the guitar, while all the other Mexican American men would sing songs in Spanish. Occasionally, the USO, a government agency, held dances for the men on base, and young ladies were bused in to dance with the soldiers. Many women met their future husbands that way, Elisa noted.

Rodriguez said he made friends in the service with ease, due to his laid-back and quiet nature. John Lujan, from Marion, Texas, and Lionel Salazar, of San Antonio, were some friends with whom he became particularly close. They became so close that Salazar asked Rodriguez to be his best man in his wedding.

Rodriguez served on the battlefront, fighting with the 12th Field Artillery Battalion, 2nd Infantry Division in the Battle of the Bulge (the Ardennes Campaign) at the end of 1944, among other conflicts. The battle resulted in 76,800 Americans killed, wounded or missing. Rodriguez was one of those injured, getting shot in the left arm. He initially received treatment in the first aid tent, later flying to a hospital in France for more help. Rodriguez recovered within four months and was ready to continue serving.

During his 20 years in the service, he earned the Good Conduct Medal, American Deference Service Medal, Purple Heart, European Theater of Operations Campaign Medal with 4 Bronze Stars, Army of Occupation, and Victory Medal.

Because of Rodriguez's limited education, joining the service provided him an opportunity to travel and educate himself that he otherwise might not have had. Rodriguez frequently sent v-mails (victory mail) home to his mother and money to his father. Due to military censorship, he was quite limited in what information he could include in his letters, but he always included words of love for his mother, Trinidad Rodriguez. Trinidad, to whom he attributes his accomplishments, was a devoted Christian. He believes her daily prayers and meditation gave him the strength to carry on and return to his family alive.

Rodriguez said discrimination has been rare in his life, and that he has taken life as it comes; during the interview, he showed no negative feelings.

Rodriguez recalled experiencing discrimination one time in Oklahoma when he and some friends decided to purchase beer and Rodriguez was denied service at the counter. The clerk thought he was an American Indian, and said they didn’t sell beer to Native Americans because they feared the alcohol's effects. Rodriguez explained he was a Latino solider, and assured the man he wasn’t an American Indian. Unwilling to listen, the clerk denied Rodriguez the sale anyway.

Rodriguez said many of the people around him, including family members, experienced discrimination. For example, when he was 9 years old, his father worked on a farm for an Anglo man. On a typical day, his father finished his day of work and turned to the man for his pay. But one day, for some unexplained reason, the farmer turned his father away and told him to leave, Rodriguez said. Even though he’d worked his fair share and had a large family at home to feed (13 children and a wife), the man didn't care and denied his father his pay, said Rodriguez, who remembers feeling angry and thinking how the farmer had treated them unjustly. It was at this point that Rodriguez decided to get away from the farming business and turned to the Army. His father immediately left the farm, packed up his family and moved to another farm for fear the man might have had a gun.

"What were they going to do -- a poor Mexican man with all of these children? He didn't have any money to go get a lawyer. So you had to just take it and pray," said Elisa, adding that many Mexican Americans were thrown into jail because they tried to fight back and get their wages.

Staying in the service for 20 years helped Rodriguez understand the importance of an education: He has seen firsthand how a lack of formal education can stymie a person's advancement. Having to work in the fields when he was younger prevented him from earning a high school diploma; without one, he was only able to obtain the rank of sergeant.

His advice to future generations: Go to school, get an education and you'll have an opportunity to get a good job.

"Nowadays, a high school education is not enough. College or a university is a must," wrote Rodriguez after his interview.

Mr. Rodriguez was interviewed in Austin, Texas, on February 21, 2000, by Andria Infante.