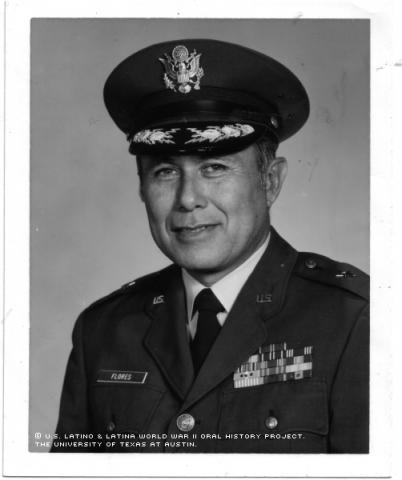 Brigadier General Belisario Flores, who served his country for more than 40 years during three wars, retired from the Texas Air National Guard and the United States Air Force in the summer of 1986. Upon his retirement, then-Gov. Mark White gave him a one-rank, honorary promotion, making him a Major General in the Texas National Guard.

“Serving under these [military] people, I learned something about leadership that you can’t learn from the books,” said Flores, one of few Latinos to have climbed so high in the Armed Forces. “From the experiences I had garnished from the many years of command, I learned to work with people.”

Uncle Sam has frequently recognized Flores over the years for his service. His honors range from Good Conduct and Victory medals from World War II, to Bronze Star and United Nations medals from the Korean War.

Born in Eagle Pass, Texas, on July 22, 1926, Flores lived there for the first five years of his life, until he, younger brother Joe and their Mexican-immigrant parents, Jose Flores and Felipa Hernandez Flores, moved about 145 miles away from the Texas-Mexico border to San Antonio. Flores started his education at William T. Harris Elementary School and finished his pre-collegiate education at San Antonio Vocational and Technical High School in 1944.

In 1943, Flores tried against his parents’ wishes to enlist in the military; however, he wrote after his interview that an Army recruiter convinced him to wait until graduating high school. Immediately after high school, he enlisted in the Army, with the goal of becoming a fighter pilot.

On Jan. 10, 1945, Flores was called to active duty. He recalls taking several tests in hopes of entering the Cadet flying program, but to no avail. Instead, he went through Basic at Camp Hood in Texas, where he was training to be a tank driver and machine gunner when the conflict ended in Europe.

When the war concluded in the Pacific, Flores was teaching radio communications and working as a supply sergeant at Camp Carson in Colorado, the headquarters of the 38th Field Artillery Battalion of the 2nd Infantry Division, which had recently returned from Europe. He was discharged August 8, 1946, at the rank of Technician Fifth Grade.

Early in his Basic Training, Flores recalls his platoon leader, Lieutenant Koepecki, encouraging him to take advantage of any educational opportunity the service offered him. Flores wrote that Koepecki thought

Flores had officer potential, if he really applied himself to his studies, and that he “never forgot those words of encouragement.”

With financial help from the GI Bill, Flores enrolled in San Antonio Junior College after his discharge, to tackle his basic math and English courses. He wrote that his goals were to attend St. Mary’s University, a private Catholic school in San Antonio, for a Business Administration degree, as well as to get an Army commission in the field artillery through the university’s ROTC program.

Before attending college, Flores recalls not being proficient enough in math and trigonometry to do artillery work in the Army. He says he applied himself, however, and became a Second Lieutenant in the field artillery unit of the ROTC program at St. Mary’s.

Officer Flores graduated in 1950 from St. Mary’s with honors, as well as the military title of Second Lieutenant. He took a job as an assistant manager at the San Antonio location of Dallas-based department store Joske’s, which later became a part of Dillard Department Stores, based in Little rock, Ark. During his last two years of high school, Flores had worked as a stock boy in the military department of Joske’s in San Antonio. Over the years, Flores wrote that he advanced to assistant manager, so, when he graduated from college, he received a pay raise “and the promise of filling the manager’s position when it next became available.”

In May of 1951, however, Flores was again called to active duty. This time, he was deployed to Korea for nine months as an artillery forward observer. He earned multiple medals during his stint, including the Bronze Star, which he was awarded for his “meritorious achievement in ground operations against the enemy” during the Battle of Triangle Hill.

The week of October 17-24,1952, is one Flores says he’ll never forget. The Battle of Triangle Hill, also known as Operation Showdown, was a protracted fight with the Chinese that claimed the lives of hundreds of American soldiers. Flores recalls bombs exploding all around him, the hum of bullets and the booms of other types of gunfire; the men kept their heads low, he recalls, as the battalion made its way up the hill to which their commanders had attached such importance.

The campaign, Flores says, was a waste of time and life.

“We needed to show the Chinese we were stronger than they thought. … We lost 1,600 men for no apparent reason,” said Flores, who, in recognition of his Korean War service, was promoted from Second to First Lieutenant in the Field Artillery.

After his second war, Flores briefly returned to Joske’s, then worked for the City of San Antonio as an accountant, where he stayed for three years.

He also joined the Texas Air National Guard division of the United States Air Force in 1954, transferring his Army commission for one in the Air Force, and becoming a supply officer in the Air Guard.

During his Air Guard service, Flores says he was disturbed by a statistic he heard: The entire Air National Guard only had four Hispanic officers.

“Latino officers simply did not exist at any level. Not only in the Guard and Reserves, but active duty as well,” wrote Flores, attributing the situation to the following:

“a. Discrimination pure and simple.

b. Lack of interest and emphasis at the National level that minorities need to be represented more aggressively at all levels of military service.

c. There is a dire shortage of Latino cadets enrolled at Officer Candidate schools and the Service Academies, i.e., West Point, Annapolis, and the Air Force Academy.

d. Only token Latinos are given the opportunity to attend in residence the prestigious military universities from which a young officer needs to graduate in order to rise to higher ranks in the military. The Air War College, The Industrial College of the Armed Services, The Command and Staff Army College, etc, etc.”

Flores eventually rose to the rank of Brigadier General in the Texas National Guard in 1974, making him, he wrote, the first Texas Hispanic to attain that rank within the U.S. Air Force, and only the second Latino from Texas to reach that status in the Guard. (The first was Richard Cavazos, who eventually became a four-star general in the Army. For more on him, see www.gale.cengage.com/free_resources/chh/bio/cavazos_r.htm.)

As Flores climbed in position, he says he was very much aware of being the only Latino in a situation of authority.

Why weren’t there more?

“It was discrimination,” said Flores without hesitation.

He later added in writing, however, that “Conditions are definitely better now than” in the 1950s, 60s and 70s. “And you see female minority officers[,] which you didn’t see at all in those years.”

Flores has held several jobs over the years, including full-time comptroller of the 149th Fighter Wing of the Texas Air National Guard.

While serving as a comptroller, Flores also commanded the 365-man Combat Support Squadron, of which he’d previously been a member.

From Sept. 1, 1971, until his August 1, 1986, retirement, Flores was Assistant Adjutant General for the Texas Air National Guard. During that time, he devoted much of his energy to “advancing the cause of the Hispanic and Black minorities,” he wrote.

In 1954, he married Josephine Guerrero, who died in 1998 due to complications from emphysema. In 2000, Flroes married Adelina N. Creco of San Antonio, the city in which they reside.

Flores was inducted into the Texas National Guard’s Hall of Honor at Camp Mabry in Austin, Texas, on July 18, 2008, a particularly fitting achievement for someone who not only gives the military credit for much of his success, but for keeping his life as a whole in check. As he put it years ago in Department of Defense promotional publication “Hispanics in America’s Defense,” “[The military] was the key to almost anything I wanted to accomplish in life. This was the one thing that from the beginning has given me the tools to work with to attain my goals and help others reach theirs.”