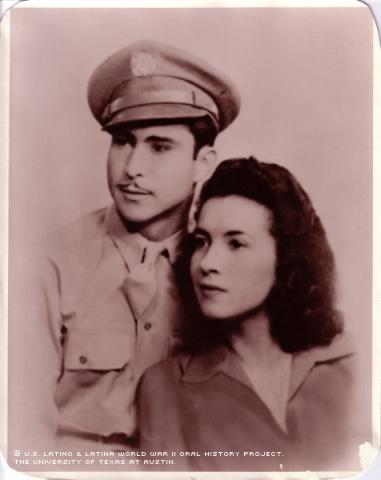 A church gathering, a pink dress and a comment to a friend 60 years ago set in motion the story of Beatrice Dimas. The party provided the scene, her dress caught young Alfred Dimas' eye, and his words said it all: she would be his.

Raised under a strict father on border farms on the outskirts of El Paso and Clint, Texas, young Beatrice Escudero hardly had the time for social events. But as fate would have it, on Feb. 14, 1942, her father, Ramon Escudero, allowed her to attend a fiesta at the small San Antonio Church in El Paso. Most of her friends, as well as soldiers from nearby Fort Bliss, were in attendance.

She must have looked stunning to catch the attention of a soldier whose country was in the middle of the greatest war the world had ever seen. And, although he didn't exactly ask the girl in the fitted pink dress to be his Valentine, Alfred did have plans for the two of them.

"He said, 'See that girl in the pink dress and the beautiful legs, I'm going to marry her,'" said Dimas about her husband. "And he did."

Beatrice and her friends agreed young Alfred looked handsome in his uniform; however, she doesn't remember what specifically caught her eye.

"But I know that I liked him," she said.

After a few months of dating, closely monitored by her father, the two were wed on July 22, 1942. While her mother didn't want her to marry, it’s hard to stop two young people in love.

"My mother said it wasn't going to work out because he was in the service," Dimas said. "But here I am, married 61 years to the man!"

Alfred had enlisted in the cavalry at Fort Bliss, but shortly after the marriage, he was sent to Fort Benning, Ga. There, he became a paratrooper and was later transferred to Fort Meade, Md. After arriving at Fort Meade, he sent for Dimas, who’d been living with her in-laws. The young girl from El Paso traveled across the country by herself to be with the man she loved. While the experience was traumatic, she says it was necessary.

It was in Maryland that the young couple found out they were going to have a son. After having the baby in Phoenix, Ariz., with Alfred’s family, Dimas returned to Fort Meade.

For a small woman like Dimas, traveling across the country with a baby by rail was a difficult task. Soon, she began to travel with other women and mothers to and from the fort. Together, they made the experience easier.

But greater hardships lay ahead. While jumping out of an airplane, her husband's parachute malfunctioned, and the harsh landing left him permanently disabled. Because of the injury, he never went overseas to fight against the Axis powers.

After the accident, Alfred was confined to a resort-turned-military hospital in White Sulphur Springs, W. Va. He was released from the Army on Oct. 31, 1945, and had the choice to go to Florida or Arizona. He picked the latter in order to be with his family.

Times were difficult after the war for the Dimas family.

"We didn't have a home to live," Dimas said. "It was bad for us, the veterans and the wives. There are a lot of agencies nowadays, but we didn't have that. We called the city of Phoenix, and three months after that, they called back and said they still didn't have anything for us."

Thankfully, she says, her in-laws were building a home and allowed them to live in it, though it wasn't complete.

"Luckily for us, [my husband] was highly intelligent and got a job," Dimas said. "But it was very sad for us."

Her husband was able to acquire a VA loan in 1950, and the couple built a house of their own in Phoenix.

Dimas had been through hard times before. During the Great Depression, her family had to sell their land and livestock to survive. She and her eight brothers and sisters had to quit school and help out in the cotton fields of Clint.

Through the tiny radio her parents had, she learned about the stifling affects of the depression.

"I could hear the news," Dimas said. "Everybody was perishing, everybody had to move."

From that point on, Dimas was determined to go back to school.

After she and her husband settled in Arizona, Alfred went to school using the GI Bill of Rights and learned the art of leathercraft. Dimas, like many women of the time, stayed home to take care of the house and children.

However, her determination won out in the 1970s, and she decided to finish her education. After receiving her GED in 1973, she enrolled in Glendale Community College. In 1985, she received her associate's degree with a major in Spanish and a minor in psychology.

For her, graduation was very fulfilling.

"I was going to go back and finish my studies and my education," said Dimas, "because I loved school."

Today, she says she loves her husband even more, and they still learn many things from each other.

Together, they are able to oversee each other's shortcomings and remain in love.

"I have never fallen out of love with that fellow," Dimas said.

She says her husband has been a hard-working person who has provided their family with a beautiful life.

Recently, the couple was honored at their granddaughter's wedding. The day also marked their 60th anniversary. Dimas attributes their long life together to overcoming each other's differences and remaining in love.

"If you stay in love, you'll stay with that guy forever," she said.

From one of the darkest periods in history, the couple's love grew and provided them, and everyone who knew them, with some joy.

"It's been a good life," Dimas said. "We've had our ups and down like everybody else, but we've been able to overcome them."

Mrs. Dimas was interviewed in Phoenix, Arizona, on January 4, 2003, by Maggie Rivas Rodriguez.