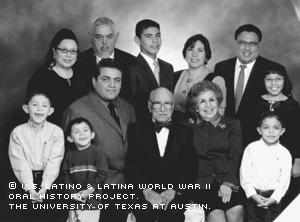 Aurora Gonzalez Castro's story isn't just about her; it’s also the story of two half-brothers, Caesar and Alfred Castro, both musicians in military bands during World War II, as well as accomplished musicians after the conflict.

Castro’s marriage to the older half-brother, Alfred, after the 1966 death of Caesar, seems to have been destined. Alfred married Aurora Gonzalez June 8, 1968, and a reception was held in her sister's house after their marriage.

"It was meant to be,” said Castro of how she ended up with two musicians.

When she married Alfred in 1968, he took responsibility for his nephew and niece, raising them as his own children. She’d have another son with Alfred.

Castro was born in San Antonio on August 31, 1925. Her parents, Jose Federico and Enedina Noriega Federico, owned a grocery store and wanted to send her to Catholic school, but she disliked the overly protective nuns.

"I just felt like it was a dungeon," Castro said.

She recalls her mother bringing her and her sister tortillas for lunch at Ira Ogden Elementary School and at Washington Irving Junior High.

Although it was the Great Depression, she wasn’t tuned into the hard times.

"We never felt it because our parents wouldn't let us know," Castro said. "We never knew any better; we hadn't gone to the outside world to see how other people were living."

Even so, times improved for the Gonzalez family when jobs opened up after the war began. After Castro’s sister, Josephine, got a job as a saleswoman at Federal Lumber Co. in San Antonio’s South Zarzamora area, she and Castro were able to buy clothes, makeup and tickets for the movies for the first time. Castro remembers watching films with stars such as the blonde Lana Turner.

"Soon as we would come out of the movies, I would look at myself in the mirror and say[,] 'Oh, God, I certainly don't look like her,'" said Castro in a written note to the Project after her interview. "I did not have her figure, beautiful clothes, and was not as beautiful, ravishing and sexy as she was."

Castro met Caesar in the band at San Antonio Vocational and Technical High School, or Tech High School, now known as Fox Tech. She played the clarinet and he various brass instruments. They married after graduating in 1945.

Caesar enlisted in the Air Force and was stationed at Kelly Air Force Base in San Antonio with the 657th Air force Band. Castro did secretarial work, including stenography and typing, for the State Department of Public Welfare.

She says jobs like hers made Latinas more independent, particularly because they could command larger salaries, like $100 a month. She eventually became the supervisor for military service records and, recalls that other women didn't like having a female boss.

"But now, women are great in their profession," said Castro, who did civil service work for 39 years.

In the 1950s, Caesar was stationed in Wiesbaden, Germany, as a musician. Castro stayed back home, but she and their two sons joined him in 1954 at Wheelus Air Force Base in Tripoli, Libya, in North Africa.

"We had a chance to travel, like to Istanbul, Turkey, but I was afraid to travel by myself with my two boys," Castro said.

"I was afraid to get lost," she writes.

After playing piano and various brass instruments for the Air Force, Caesar free-lanced in the music business until he died in August of 1966.

"I would like people to remember him as a very, very intelligent person ... with great musical ability," Castro said.

On Memorial Day of 1968, her oldest son, Caesar Charles, died in a car crash at the age of 20. In her grief, she turned to her Catholic faith. She also became close to her late husband's half-brother, Alfred. Ten years older than Caesar, he was also a musician.

Alfred’s mother, Juana Estrada Castro, had died of influenza. During WWII, Alfred had served as a musician in the Army. He and Castro married in the summer of 1968 and made their home in San Antonio.

"We really had a good life together, Alfred and I," Castro said.

Alfred and Caesar's father, Luis, was adamant all of his children -- two from his first wife and three from his second -- have musical training. The children were reminded to take good care of their hands, the tools of their possible trade. And the family moved about often, looking for jobs as musicians. During the Depression, Luis gathered a group of men and his little boy, Alfred, to play at house parties in cities like Austin, Beaumont and Houston.

"They would always put Alfred in front because they thought that he would bring more tips," Castro said.

Later, Alfred played with a Mexican vaudeville show, La Carpa Garcia. He formed his own group in 1983, Al Castro's Marimba Sounds, and it became a highly acclaimed trio; he played marimba.

"He flourished because this was just the place [San Antonio] where he needed to be with his talents," Castro said. "He met a lot of people and worked for a lot of personalities, like Barbara Bush."

But then, in June 2003, Alfred died. Castro says she honors the memory of both brothers.

Mrs. Castro was interviewed in San Antonio, Texas, on October 25, 2004, by Anna Zukowski.