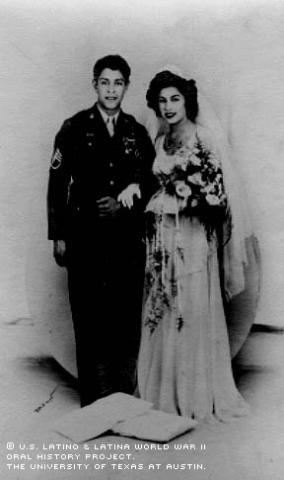 In the Army, Agustin Lucio, a 10th-grade dropout from a farming community outside San Marcos, Texas, noticed that many other young soldiers were educated or had finished high school. So, while in training, he decided to educate himself, asking for books and learning from those around him.

After two years at Fort Sam Houston in San Antonio, Lucio was sent to Camp McCoy in Wisconsin, where he received elite Ranger and ski training. He would be sent to fight in Europe as part of the D-Day invasion.

Lucio was born on Nov. 27, 1922. As a child, he lived on a farm 2 1/2 miles from San Marcos with his family. His mother, Maria Jesus Garcia, was an educated woman from Santa Rosa, Guanajuato, Mexico. She left during the Mexican Revolution for the United States in 1916.

Maria encouraged all of her children to go to school, even if it was only for several months out of the year; the rest of the time, the children worked on the family farm. By the age of 18, Lucio had only finished the 10th grade. He joined the Army on Jan. 7, 1941, 11 months before Pearl Harbor was attacked. Young Lucio was assigned to Company L, 3d Battalion, 23d Regiment, 2d Infantry Division.

In October of 1943, he was sent to Northern Ireland, where he continued training while waiting to be assigned to a battlefront.

At that time, Lucio and his platoon began to see the struggles of the war. During the night, German planes would pass overhead -- planes the Germans sent without pilots, called buzz bombs -- to destroy strategic targets.

Lucio still didn’t know where or when he’d be stationed. Then one day, he and his company were asked to sit around a table covered with sand -- a representation of Normandy -- to discuss the strategies they would use for an invasion the next day, June 6, 1944. Known as D-Day, it turned out to be the beginning of the end of the war and the most difficult and complicated operation to take place.

"I remember General Eisenhower saying, 'You have been chosen to make this invasion, a great crusade, something that some of you will remember. Good luck,'" Lucio said.

In the dark hours of early morning, the troops were loaded into LST ships. The landing crafts could go really fast and had a maximum capacity of 40 men, and the troops used them to land closer to the shore.

"We were about 30 or 40 soldiers in each LST, and they hit as close to the beach as possible," Lucio said. "My [battalion] and I landed [between Utah Beach and] Omaha Beach at 7:10 in the morning, and the rest of the troops arrived five minutes after. There was a lot of commotion -- it seems like it was fog, but really it was [gun] powder smoke."

A bullet hit Lucio's platoon sergeant after the first day of combat, and Lucio took his place, leading the 45 men trough the Cerisy Forest. They were pushing back the Germans. After three days, they took the first little village of Traviers. In the middle of July, they arrived at the high ground known as Hill 192, after other troops took the important city of Saint-Lo. Lucio led his platoon to capture Hill 192, and then the 2nd Division was assigned to take the Port of Brest in Southern France, where Lucio was wounded in the leg.

"It was not something serious," Lucio said. "The next day I got back to combat."

After Brest, the 2d Division was transferred to Belgium. Lucio crossed the Hurtigen Forest, helping to push the Germans back. Finally, the Germans made the big and final push known as the Battle of the Bulge. This was one of the most controversial campaigns, and it was the one that changed the face of the war because of the struggles between the Allies and Germans. This was the beginning of the invasion of the Third Reich from the West.

After eight months of combat, Lucio was given the option to return to the U.S. for 30 days, and he accepted. In late March, he returned to the U.S. and went to San Marcos. One day, he visited his girlfriend, Delia Saldivar. She asked him to marry her before he returned to the warfront. They wed on April 15, 1945. The couple would eventually have four children.

Lucio received a telegram ordering him to return to Fort Sam Houston in early May. By May 8, the war ended in Europe. On May 12, 1945, he received an honorable discharge. He earned the Silver Star for gallantry in action, the Bronze Star for meritorious conduct in combat, the Purple Heart for wounds received in combat and the French Croix de Guerre for the liberation of France.

Lucio returned to San Marcos the next day. He eventually took a job at Austin's Bergstrom Field, later named Bergstrom Air Force Base, and studied business administration at Southwest Texas State University. He completed 18 hours of coursework before he was promoted at Bergstrom and stopped his studies. He worked for Bergstrom for a total of 35 years and retired as the chief of quality control.

On May 5, 1972, Lucio led a boycott of all the schools in the San Marcos School District to protest unequal treatment of the growing Latino community; there were not enough Hispanic teachers.

After his many years of service, the school district named the high school library after Lucio.

Lucio said he has had a wonderful life full of blessings, and added that he wouldn’t change anything he has done. He continues to be an active and respected member of the San Marcos community.

Mr. Lucio was interviewed in San Marcos, Texas, on February 10, 2003, by Denise Chávarri.