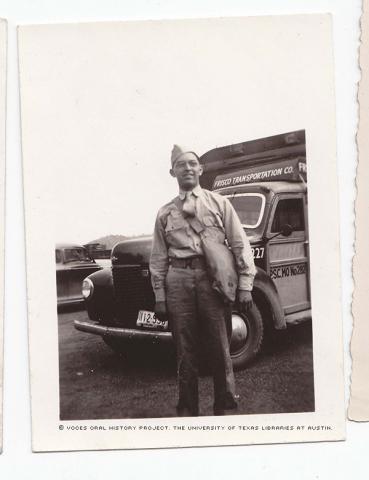 He was only a junior in high school, working a part-time job on Sept. 10, 1941, when Arnold Cordova received a government letter ordering him to report for military service. Once in the Army, Cordova did not recall very many other Latinos around him. They became even scarcer when he was chosen to be a surgical technician, a field in which he had no prior experience.

Starting in 1941 as a private at Camp Grant, on the outskirts of Rockford, Ill., Cordova said he was moved to Fort Leonard Wood, Mo. After becoming a corporal, he served at Camp Crowder, outside of Neosho, southeast of Joplin, Mo., from 1943 to 1945. He was a tech sergeant before being shipped from New York to Le Havre, France, as part of the 65th Infantry Division on Jan. 10, 1945.

Cordova spent most of his time in hospital buildings rather than battlefield tents. He recalled that he looked after many seriously wounded soldiers. His primary duty was to control the hemorrhaging of soldiers' wounds. Cordova vividly recalled one officer.

"There was a second lieutenant that stepped on a foot mine. It was terrible," Cordova said. "It had busted his whole foot."

While in Europe, Cordova traveled to Germany and Austria, doing the same kind of work--treating the wounded, making sure they had plenty of fluids, and keeping them from going into shock when injured. Cordova said he was never injured or in any real danger from the war.

Cordova left Europe on Dec. 13, 1945, and arrived back on U.S. soil on New Year's Day. He was discharged 10 days later at the final rank of tech sergeant, as a technician 4th grade. During his service, Cordova received six medals: American Defense Service Medal; American Campaign Medal; European-African-Middle Eastern Campaign Medal; Good Conduct Medal; Meritorious Unit Award, and the World War II Victory Medal. And, although he valued his time in the Army, Cordova said he was not interested in re-enlisting for the Korean War.

After returning to his native Los Angeles, Cordova went back to school and earned his high school diploma while working part-time at a gas station. He also married his pre-war fiancee, Esperanza, on May 19, 1946. During the war, they had written to each other daily.

The Cordovas had two sons, Arnold Jr. and Richard. Cordova operated gas stations in Los Angeles and eventually opened his own auto repair garage, following in his father's footsteps.

At the time of his interview, Cordova spent much of his time going on neighborhood walks, watching TV, reading, and admiring his white 1969 Chevrolet El Camino, which he no longer drove.

Taking time to reflect on his own past, he said he was not sure how he felt about military service and war. He was happy that the military draft has been discontinued.

"You shouldn't go to war," he said, "but you have to go serve your country."

Mr. Cordova was interviewed by Cheryl Brownstein-Santiago in Los Angeles on Jan. 7, 2011.