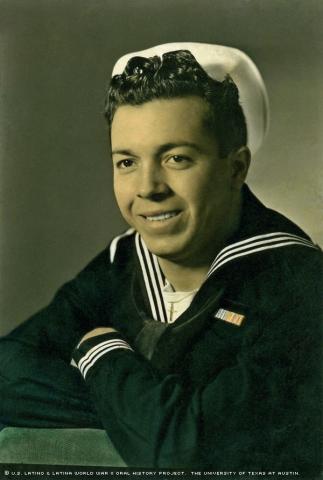 Antonio Jasso wanted to make sure no one considered him a war hero.

“I didn’t see no war … I’m not gonna take credit or say that I saw action. I didn’t. I was, thanks to God, a cook in the Navy. I had it made in the Navy,” Jasso said as he shared stories about his years in the service.

Jasso, a native of El Paso, Texas, moved to Kansas to work, joined the Navy, and later moved back to Kansas where he lived at the time of his interview.

Jasso was born on April 7, 1928. He was one of 10 children, eight of whom were girls. In 1942, his mother, Paula Jasso, died of pneumonia. Jasso dropped out of the 6th grade and began working to help support the family. He stated however, that while he was growing up, his family did not suffer economically.

Among his first few jobs was as a night guard at the factory where he worked during the day. Every night, he would walk over to the factory with his dog and then leave his dog there as he returned home to sleep.

In the morning, he returned to the factory and sent the dog home, pretending he was there all night long. Afterwards he worked eight hours at the factory. He would then go out with the older workers for drinks later in the evening. He said, with a smirk, that they were all impressed with his ability to do all that and the night shift.

Jasso grew up in a predominantly Latino community and had many friends with whom he spoke Spanish. In school, they were instructed to only speak English, and if they did not speak in English, they would be spanked.

Jasso recalled that one of his sisters dated a guy that only spoke Spanish. He later joined the military and went overseas for a few years, and when he returned he could only speak English. Jasso and his friends would tease this guy for not remembering any Spanish. Jasso later added that he always remembered his Spanish.

Even during his years in the war, Jasso always had Latino friends. He would listen mainly to Spanish radio stations, both before and after the war. Many of the things he read, like the comics in the newspaper, were in English.

He and his friends loved tattoos, and they had a friendly competition over them. When one friend got one, Jasso would go get one too. Jasso particularly loved one tattoo in the shape of a shark.

He said he remembered only one moment of discrimination during his time in the Navy, and it involved a naval officer. The officer had been in the service for 40 years and did not like Jasso and his friends. The officer told them, “You guys better behave. If it was up to me, I would get all you guys and just throw you overboard to the sharks.”

Later, Jasso said, the officer tried to re-enlist but he was past the age limit and was not permitted to sign up again. Jasso remembered that the officer cried, and despite how the officer had treated him, Jasso tried to comfort him. The officer apologized for treating Jasso and his friends so badly. That was the only time he remembered being discriminated against in the Navy.

Jasso’s uncle lived in Ciudad Juarez, Mexico, and had horses that Jasso would ride. That was where Jasso was at the time the United States entered World War II. He recalled it as “clear as day.” He wanted to enlist right then, but he was too young and had to wait until he was eighteen. Jasso said that one of the reasons he wanted to enlist was because he believed girls liked a man in uniform.

Jasso enlisted in the Navy right after his brother Trinidad finished his tour of duty in the same branch of service. On a typical day, he was usually at sea. He spoke highly of his ship, the USS Princeton, and said that it had everything but a swimming pool. It was his longest assignment. He also served on the USS Mindanao and USS Gates.

After boot camp in San Diego, the Navy assessed everyone’s capabilities and decided that Jasso should be a cook on the ship. Even though that was not the position Jasso originally wanted, he accepted it and appreciated the opportunity. He said he always obeyed his orders.

During his time in the military, he and his crew went to China, Guam, Panama Japan, and Hawaii.

When Jasso was in Shanghai, he remembered, the sailors were instructed to go out in groups because it was a dangerous city to tour alone. One man did not follow this rule. He went out alone and was found dead the next day. Jasso always traveled in groups of five or six men.

Jasso served from September 1945 to April 1949. He left the Navy as a seaman first class.

Jasso believed that he lived an ordinary life, and his stories of the time in the war are not “heroic.” He’s settled into a quiet life. His wife died in March 2011, and Jasso decided to move to a smaller home. He grows chilies and tomatoes in his garden.