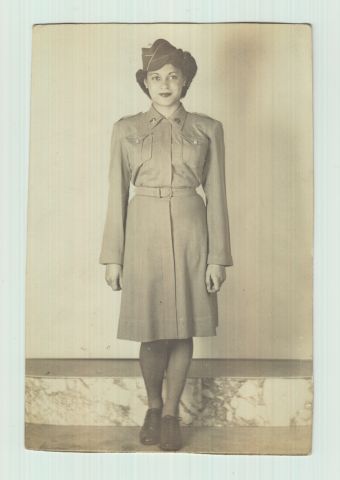 When you think about heroes, people that left everything they had to fight a war, you usually think about strong, buff men. But women also have served in the military along side of men.

One such woman was Antonia Santana.

Santana was raised in Gurabo, Puerto Rico. As a young girl she lived with her parents, five sisters, two brothers and her two grandmothers. She said 11 people living under the same roof was not as chaotic as one would think.

"We were a very close family, we never really fought," she said.

Santana attended Puerto Rico High School of Commerce and continued her education at the University of Puerto Rico in San Juan. It was there that she got the opportunity to join the U.S. Army during World War II.

"It was my second year at the university and I was an undeclared major. One day, I read the newspaper and saw that the U.S. needed women that were willing to join the military," she said. So she enlisted to the Women Army Corps -- the WAC -- on Nov. 14, 1944.

Antonia's brother Angel was drafted, and both served in the Army at the same time.

"At the time I guess I just wanted a change, an adventure... It wasn't that I was unhappy at home. I just always liked the things men liked -- the mechanics, the skate and the bicycle." she said.

"When I told my parents that I was joining the military, they were desperate -- it was the first time a daughter was going to leave. They feared that I would leave and never come back", she said.

Santana expected the military to be much tougher than she actually encountered because, she said, it was something men did.

She soon found that her fears were unfounded -- she found a warm welcome when she was assigned to the WAC's 9201st Technical Service Unit. Working side by side with other women who performed technical duties, Santana felt at home and made new friendships.

"It's like if we were family. We were all from Puerto Rico. We talked English because we were not allowed to talk Spanish, but we spoke it among us anyway when nobody was around," she said.

Santana recalled that the training was not easy, and a many women left because they found it too difficult. Fortunately for her, she said, the chores she performed back home helped prepare her for the tough training.

Santana said she missed her family but she gained another family in the military.

"You definitely missed your family, but there were a lot of women around and we all told our stories. We would wake up at 4 a.m. and did chores, served food..." she said. Santana's group was secluded from men--they were not allowed to talk to any men.

Santana eventually was sent to New York City, where she worked as a postal clerk for over a year. For her, participating in the military during WWII turned out to be a good experience -- and she came to enjoy sending letters to other soldiers.

"I thought that I was not accomplishing anything in the military, then this veteran I met at the veteran's center told me his favorite part was receiving those letters and that lifted my morale," she said.

Santana enjoyed her time in the WAC, but when she arrived home in Puerto Rico in February 1946, she encountered problems. She found that many did not have a positive view of women who did military service.

"I suffered more discrimination in Puerto Rico when I arrived than when I was in the United States... People in the U.S. admired us yet here in Puerto Rico, people thought that we (women) had gone to the U.S. to entertain men or that we were lesbians," she said.

Santana said all of the women who were in the military were happy and proud to have served. They were also happy to come back home. Yet the comments that men in Puerto Rico were making about them lowered their self-confidence.

"I tell veterans the truth, what they think of us is not true... I had to learn to be tough," she said.

Why send them out with the men? That is an error," she said.

For Santana noted, however, that some positive changes have occurred. She said that women have prepared themselves intellectually and professionally. But she said homes are no longer what they used to be.

"When I was a child, I would come home from school with my friends and my mom was there with my grandmother waiting for us with a cup of coffee... Nowadays families don't even get together at the dinner table," she said.

Santana said that women should get an education so that they can be prepared and not dependent on men.

When Santana left the military and returned to Puerto Rico, she went to the first American beauty school there and later bought her own beauty parlor. After 14 years, she started working for ITT [a telephone company in Puerto Rico] because she said she wanted a reliable salary and a change.

Santana married at 23 to her now ex-husband, who was also in the military. A World War II veteran, he was injured while serving the Korean War. She said he became depressed from what he saw in the war. They had been apart for 30 years at the time of her interview.

They had three children together and all got a college education. Santana always found it interesting that her two daughters were born on November 14, the same date she enlisted in the military in 1944.

Because of her experience in WWII, Santana said she gained more confidence and she learned to defend herself. The only problem she had with her participation in the war was the discrimination she suffered back home.

"I never felt any discrimination as a Puerto Rican in the United States... and I treated everybody else with respect," she said.