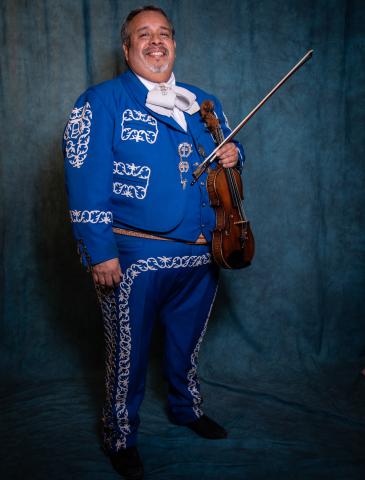 Anthony Medrano is a modern mariachi master. He has performed at the White House and internationally, co-directed an annual mariachi festival at the Hollywood Bowl, and been a member of Mariachi Campanas de America, based in San Antonio, since 1986. He can’t explain what drew him to mariachi music. But it is the passion of his life. He considers himself a caretaker of a Mexican cultural tradition that dates back to the 18th century, and possibly earlier. “I’m blessed to be that person that says, ‘This is what represents us; this is part of us,’” he said.

Medrano was born Feb. 4, 1963, in San Antonio. His father, Carmilo, was a postal worker; his mother, Esther, had an administrative job. No one else in his family is a musician or an entertainer, but Medrano’s younger sister took lessons with Ballet Folklorico San Antonio, and he would go along when his parents took her to classes. Male dancers were rare, and when an instructor said, “You know, we need boy dancers too,” it turned out that Medrano had talent.

He credits the demanding teachers from Mexico for his professional success as a dancer. They instilled in him discipline and a deep understanding of the culture. “It helped me become the student I’ve become for all kinds of arts,” he said. And it connected him to the music. He became good enough that he performed across the U.S. and in Mexico, with BFSA and later Danzamerica, and was offered a scholarship at San Antonio College. That’s also where he met his wife, Laura Barberena, a political consultant.

After the performances, Medrano would hang out with the musicians and play basketball with them. That’s how he met Juan Ortiz, music director of Mariachi Campanas de America (Mariachi Bells of America.) Ortiz asked Medrano whether he’d like to learn the violin. “I was 21 at the time. I had never taken any lessons. I didn’t know how to read music,” Medrano said. He also didn’t know that the violin was hard to learn. “But why not?” Ortiz became his teacher, and a few months later, Medrano was performing. “And that’s how I got into mariachi, and that was 36 years ago. So, then and now, I am me, mariachi.”

The 12-member group has performed at some impressive events, including the inaugural gala for Bill Clinton’s election in 1994 and at the White House Rose Garden for President George W. Bush and his wife, Laura, for Cinco de Mayo in 2008. Medrano has helped the group to add some modern touches to the tradition, drawing on popular music artists such as Santana. “We started adding drums and trombones and keyboards to make our own sound,” he said. He used his Folklorico experience to add dance steps to the performances. “We brought movement to the stage, which kind of freaked a lot of the old-school guys out,” because traditionally, the musicians stay in the background and don’t move.

Instead of the traditional black trajes, or suits, the members wear striking blue suits, with abundant silver gala adorning the jacket and fitted pants. With boots, belts, deep-brimmed sombreros and oversize silk bow ties, the cost can come to $4,000. “There's been articles written that we kind of bastardized the genre, which I guess depends how you look at it. I mean, you could take it as an insult, but we kind of took it as a compliment,” as other bands started doing the same thing.Medrano soon began to take on additional roles -- choreographer, stage director, technical director and more.

It was through the annual Mariachi USA festival that he met Rodri Rodriguez, a Los Angeles-based music event producer and entrepreneur who created the festival in 1990. Mariachi Campanas has been part of the event at the Hollywood Bowl for years. About 10 years ago, Rodriguez came up with the idea of staging a mariachi show in Las Vegas, something that never had been done. She asked Medrano to direct it. It was supposed to be a two-week project; Medrano ended up staying six months. He said it was like going to college to learn production -- how to make a cast happen, to make a show happen. “Yeah, I learned a lot,” he said. “It made me someone that I didn’t know I could be.” That’s when Rodriguez asked him to co-direct Mariachi USA. “I remember when I first got there, I was scared,” he said. “The people in charge were all white people, and I’m Anthony from the east side of San Antonio.”

Mariachi had not gotten respect from some outdoor venues. He recalls being blown off by one venue, where staff members told him he’d have to settle for three or four microphones when he needed 10. He said they didn’t even bother to check whether they had more microphones. He had a different experience at the Bowl, where staff worked with him. He’s the first member of the production company to arrive each year. “I walked on the stage last year, and it was such an incredible moment for me in my career. … The 18,000 seats were empty. The stage was empty. It was 9 o’clock in the morning, and the only one who was there was the sound guy. And as I walked on stage and looked around the whole sound system, you could hear it: ‘Hello, Anthony. Welcome back.’ Wow, the Hollywood Bowl knows my name.”

He sees mariachi as an art form that will endure, just as traditional classical music has done. “You know, the songs that are being sung now were sung years ago, so they’re still around,” he said. “I think they’ve already proven they’re timeless in a sense. So just like the Bachs and Mozarts and all those classic musicians who were born in the 1500s and 1600s who still get played now -- I pretty much see that happening with mariachi music. So 300 or 400 years from now, we’ll still have ensembles and we’ll still have these same somes being sung. ... I just see it as a forever thing.”