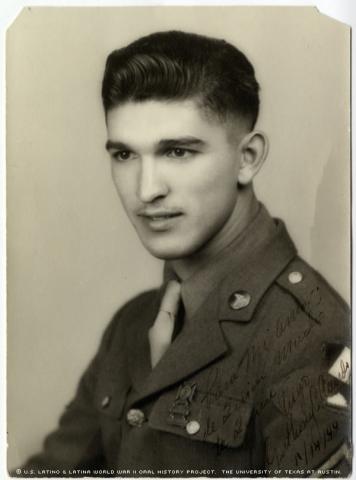 It was 50 degrees below zero, one of the coldest winters Germany had seen in 50 years. A blanket of snow several feet high covered the ground.

Wearing only combat uniforms designed for warfare in the tropics, a group of about 40 Americans from the 275th Infantry Regiment trekked at gunpoint down to the bottom of Falkenberg Ridge, a rocky hill near Phillipsburg, where German army trucks awaited, recalled World War II veteran Anthony Acevedo.

These soldiers had been taken prisoner by the Germans, and 19-year-old Acevedo was one of them.

“They made us take our boots off and walk barefooted in the snow,” Acevedo said. “It was up to our waists.”

At 85, Acevedo still seems to remember that moment as if it were yesterday. He said he travels around his hometown of Yucaipa, Calif., 10 miles east of San Bernardino, telling the story of his life both before and after World War II to a wide variety of audiences.

“I do it with great pleasure,” Acevedo said. “I tell it without hate, no animosity at all, which is the most important thing.”

On Jan. 6, 1945, Acevedo and a group of men from his detachment had been heading back from a special assignment when the Germans attacked. Running out of ammunition, they were forced to surrender during the Battle of the Bulge.

“The Germans were getting closer and closer,” Acevedo said. . . . “We ran out of ammunition until, finally, we were caught.”

The men were eventually taken to Stalag 9B, a prisoner of war camp in Bad Orb, Germany. There, the Germans accused Acevedo of lying and spying against Germany back home in the northern Mexican state of Durango, where both Ally and Axis spies, all keenly aware of their proximity to the United States, gathered intelligence and counterintelligence.

“They put needles in my fingernails,” Acevedo said. “Like nailing me to the cross.”

He was taken with a group of 350 Jewish soldiers and other “undesirables” to a slave labor camp in the town of Berga, part of Hitler’s Buchenwald forced-labor camp system. The prisoners were forced to dig tunnels. But medics, including Acevedo, were fortunate enough to sit out.

Acevedo recalled being fed soup made from weeds mixed with dead cat or rat. Bread contained sawdust, ground grass and sand, and they were only given 100 grams per week.

“At the time, you would eat anything to try and survive,” Acevedo said.

He was among 350 who entered the camp. Malnourished and without energy, these survivors were forced on a 217-mile death march south from Berga to a camp near Rötz, where those who remained were stripped, deloused and, finally, liberated. Only 165 had survived the march. At the ordeal’s end, Acevedo, who weighed 149 pounds when he was captured, weighed only 87 pounds.

Ever since childhood, Acevedo said, he has repeatedly faced hostility. Born in San Bernardino, Calif., on July 31, 1924, he grew up and attended elementary school in Pasadena, Calif. His father, Francisco Acevedo, and mother, Maria Luisa Contreras Acevedo, had both been born in Mexico, and Acevedo recalled being discriminated against for being of Mexican descent.

“Our school was for Mexican Americans only,” Acevedo said. “We could not mix with Americans until we went to junior high.”

To make matters worse, Acevedo’s parents were deported to Mexico in 1937, when he was 13. Acevedo, his three brothers and two sisters followed them to Mexico.

They moved to Durango, where Francisco Acevedo, an architectural engineer, became the director of Public Works.

“He would put me in the corner of the room, staring at the walls as a punishment,” Acevedo said. “I would stand there for two to three hours.”

Despite the tension in his relationship with his father, Acevedo said he was able to relate to him through drawing. Acevedo had his father’s artistic ability, so he said he would help Francisco with his architectural-engineering sketches while the elder Acevedo went to work.

As the younger Acevedo grew older, he became interested in studying medicine. At the same time, however, the U.S. Consulate was sending him updates on the date he would leave for the United States to get drafted into the war. And that day finally came when he was 18.

Acevedo was inducted into the Army on August 9, 1943, in Fort MacArthur, Calif., where he was assigned to the 70th Infantry Division. His father had given Acevedo names of people in Durango who could help him get assigned as a medic. Durango’s governor, Gen. Elpidio G. Velazquez, was one of his contacts.

“He was quite a guy – a very good friend of my father’s,” Acevedo said. “He always asked my father for the best, and my father always gave it to him.”

After six months of medical training, Acevedo was one of 15,000 American troops to board the USS America at Camp Myles Standish in Massachusetts. They got to Marseilles, France, about two weeks later.

“It was a hell of a trip,” Acevedo said. “I couldn’t stand the waves – seasickness.”

After arriving in Marseilles, Acevedo and the other men were taken to Phillipsburg, Germany, a small wire-factory town on Germany’s western border. There, he was assigned as medic to the 275th Regiment, Company B.

On June 12, 1945, when he was 21, Acevedo returned to the U.S. and was discharged that year, on December 10. He earned two Purple Hearts for injuries. He also received the Good Conduct Medal, two Bronze Stars and a Medic Badge.

Nearly 65 years later, a framed glass box hung on a wall in his Yucaipa home, where, at the time of his interview, he lived with his wife, 89-year-old Maria Dolores Espinoza Acevedo. The box held multiple medals, which Acevedo displayed with pride, knowing each time he shared his story, he would touch the lives of others.