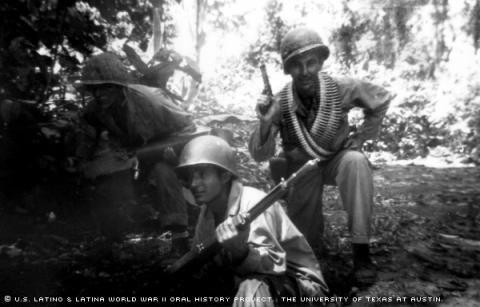 In the late 1930s, as war intensified in Europe, the United States was coming out of the Depression, but not yet directly involved in the War. In San Diego, a high school student named Andrew C. Esparza was biding his time: anticipating that he would serve his country, but enjoying his youth.

In November 1942, on his 18th birthday, he became the fourth son of Luis M. and Nemecia Esparza to receive his draft notice for World War II. Esparza spent 2 years, eight months as a heavy machine gunner in the 182nd Combat Infantry serving in the South Pacific.

The experience transformed Esparza: He no longer supports wars of any kind where the US is involved. He is proud of the fact that he served in World War II, but it is something that he hopes that members of his family never have to experience. To him there are no winners.

"War is hell," he said. "Whoever said that was right."

Esparza's childhood was difficult. During the Depression, his parents struggled to support the family. His family lived in a one-bedroom home in San Diego. His father was a laborer; his mother a maid. The family - he would be the fifth of 10 children -- lived on beans and tortillas with the occasional piece of meat.

"I would take bean tacos to school," he said. "The white kids would trade...because they liked the tacos."

Going to school was hard for Esparza; he was held back because he could not speak English. He remembers that his older siblings faced discrimination in school because they were Mexican. However, he also recalled his oldest sister, Elvira, fighting back for her right as an American. His older brothers Luis and Ernest joined the Civilian Conservation Corps to help the family out after they finished school.

As Esparza and his friends came out of the movie theater on Dec. 7 1941, they heard the commotion on the streets: The Japanese had bombed Pearl Harbor and the United States was going to war. Esparza's life returned to normal for only a short time while he waited for his draft notice.

Soon after the country entered the war, he dropped out of school to work at the shipyard with Concrete & Aircraft as a labor. His brothers, Edward and Ernest, were both drafted, serving in North Africa and New Guinea, respectively. His older brother John joined the Navy at 16, with his mother's permission, and served in the Pacific. One year later, Esparza received his draft notice. A short time after that he was off to the South Pacific to join in the fight against the Japanese forces.

It took 27 days for the transport ship to reach Fiji, his first stop. After that his unit made its way to New Caledonia, Bougainville, and the Philippines, where he saw plenty of combat. Fortunately, he escaped unharmed, but he remembers that others were less fortunate. He recalled the first time he saw someone killed -- his assistant machine gunner Sam Cutia. After that, Esparza lived in fear.

"I was scared... always scared that I would lose control," he recalled. "If a guy (there) wasn't scared, he was damn fool or a liar."

During the two years he served in the Pacific, he saw many of his friends get killed and a few go crazy because of the horrors of war. He remembers praying a lot that he would return to the family he dearly missed and the food his mother cooked. He also visited the priest before combat missions to talk.

"I was always scared," he said. "But it never crossed my mind that I might not make it back."

His unit would spend days and weeks in the jungle holding the lines against Japanese advancement so the U.S. Army Air Corps could move in to the region. His unit returned from missions to Filipino villages where American soldiers were treated "as kings... because they were happy to see use."

Toward the end of the war, Esparza left the front line because he caught malaria, or "jungle fever." The war was over by the time he made it back to his unit in Japan. As a machine gunner, Esparza received a promotion to the rank of sergeant.

He returned safely to his family in San Diego on Christmas Eve 1945. His three brothers also returned to California unharmed, filled with the memories of war. He remembers his father and mother cried for days after their sons returned.

"I would tell (them) it was okay," he said, referring to how he comforted his parents.

After he returned, it was the GI Bill of Rights that really helped him get back on his feet. He was paid to take night classes to learn carpentry. He received training and support to help him out in life.

In 1946, he married his wife of 54 years, Clementa Pena Esparza. He fathered four children, Rita Andrea, Andrew Anthony, Rosanna Marie, and Adam Joseph. He is the proud grandfather 12 and great-grandfather of 12. He is a proud member of the Veteran of Wars Post 7420, where he also served as post commander in the early 70's, helping to raise funds for a new building.

At 75, remembering things that happened at home the day before are difficult for Esparza. But the war is something he will never forget.