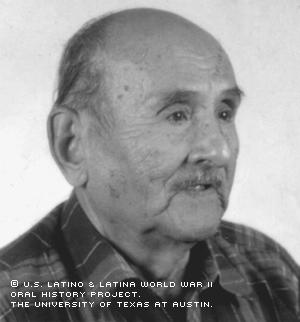 Andres Arredondo dealt with adversity throughout his life. He overcome the death of his father at an early age and endured the torture of being a prisoner of war during World War II. Yet, through it all, he has managed to remain humble.

Arredondo’s POW memories are from the days he was forced to work in fields near Luxembourg in the middle of winter. He remembers the bitter cold and the pain he suffered in a cramped cell.

"I remember going out into the fields in the dead of winter with more than 3 feet of snow on the ground," Arredondo said. "The ground would be frozen solid and our feet and hands would freeze to the bone."

Born in Laredo, Texas, on Feb. 26, 1916, Arredondo is the son of Eduardo and Juanita Arredondo. He had two sisters, Aurora and Trinidad, who are both deceased. Eduardo worked for the railroad in Laredo and Juanita was a homemaker who took care of the children.

"We were never a rich family," said Arredondo, "but we always had enough to get by. We were happy."

At the time, Laredo was booming with Mexican immigrants, who’d fled north to avoid the Mexican Revolution. Laredo was largely Latino and was quickly becoming a gateway city between Mexico and the United States.

"Laredo was a peaceful, quiet city," Arredondo said. "You never saw racism, crime or discrimination. Now it isn't even safe for my grandchild to go and play outside."

Arredondo was 8 when his father passed away, so as a young boy, he was saddled with the responsibility of taking care of his family. In only one day, he’d become the man of the house and had to find a way to put food on the table.

Arredondo says he immediately quit school and began working night and day to provide for his family. He tried to find as many jobs as possible to keep his sisters in school. He made a living working as a ranch hand, as well as cleaning dishes and banquet halls.

"My mother was scared," said Arredondo, "but she also knew that it was something I had to do. She told me to go serve my country."

Arredondo was sent to San Antonio for basic training. After that, the Army sent him to New York, where he boarded a troop ship destined for England. He didn’t stay in England long, as he was soon engaged in fighting on the European mainland.

Arredondo recalls he often forgot about dying, even when out on patrols. He says he knew he could only rely on his rifle and his will to live.

"I saw horrible things," said Arredondo, "but the only thing running through my head was to run for my life."

During one patrol near Luxembourg, Arredondo's team was surrounded and captured by German forces at the Battle of the Bulge in mid-December of 1944.

He says his English was so poor he had to receive his orders from German guards via a Mexican translator while a prisoner. After German officers at the POW camp interrogated him, he was forced to work in the fields.

Arredondo says he’d wake up each morning to cheese and bread for breakfast. In the evening, after a grinding day of work, prisoners were fed horsemeat and coffee. He remembers returning to his cell at the end of the day and hardly being able to move because of the unbearable pain in his legs.

Arredondo’s hopes were finally revived when American forces liberated him; he was finally going back home to the U.S

"Our entire bodies were covered with lice. We had not seen a shower in a year," recalled Arredondo of when he was liberated from the camp.

Upon gaining his freedom, Arredondo was sent to San Antonio, Texas, where he finished his active duty. After being honorably discharged, he settled in Rio Bravo, Texas, about 15 miles southeast of Laredo.

Arredondo worked as a policeman and raised nine children. He says he has taught his children the value of appreciating life. Some of his children have moved away from Rio Bravo and now live in Chicago and San Antonio.

Arredondo retired from the police force on his 64th birthday. He has trouble walking as a result of working in the ice and snow when he was a prisoner in Germany. At 86, he says he has enjoyed watching his grandchildren and great-grandchildren grow up.