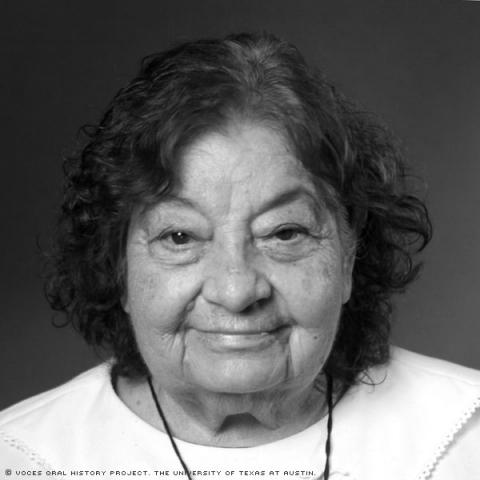 Alma Salinas, a lifelong Democrat, switched to the nascent Raza Unida Party in the 1970s. A native of Pearsall, Texas, Salinas used to take Mexican Americans to the polls on election days. But it seemed the Democratic Party, which the community supported, was doing little to improve their lives.

"We thought going to vote would make a difference, but then we found out that the ones sitting in the Democratic chair have the say so you can't go further," said Salinas, who is now 82.

Democrats were not giving a voice to Mexican Americans. It was impossible for the community to get through to their congressmen. That is why, with the rise of the Raza Unida Party in the 1970s, Salinas stopped voting for the Democratic Party. But she did so reluctantly.

"I was Democrat all the time, but I knew there was a need so I said, 'We better do it because we need a change,'" she said.

Switching to Raza Unida was not easy for Mexican Americans in the small town of Pearsall, 50 miles south of San Antonio.

"We were threatened with our jobs because the Anglo bosses would not approve of us supporting the party," Salinas said. "I was a homemaker at the time Raza Unida was gaining force. But some women, especially those that were employed as housekeepers for affluent Anglo households were fired for supporting Raza Unida."

"They know where to put the nail and hit with the hammer," Salinas said, referring to Anglos. "You have to have courage."

The Raza Unida was fighting for the betterment of Mexican-American lives at a time when the community was denied its basic rights. The first Raza Unida candidate Salinas voted for was Ramsey Muniz, who ran for governor of Texas in the early 1970s.

"None of the major state candidates won any elections, but the party had some successes at the local level," Salinas said. "A major victory for the party early on was that we were able to obtain enough signatures to petition to have the precinct lines changed and realigned. Joe Trujillo and Roberto Trevino were the first candidates elected to local positions as justice of the peace and Constable, respectively, after the precinct lines were redrawn."

Salinas was born in 1933 to George Washington Escobar Hernández, a cowboy, and Virginia Treviño Hernández, a housewife. She became politically active in her late 30s and began driving Mexican-American voters to polls. It's a political activity she still hasn't given up – even in her 80s. The last person she took to vote was her mom during the 2014 elections. That was also the last time Virginia would vote – she died in February 2015.

"She was 98 and the last time she went to vote was this last election," Salinas said. "They had to come to the car and help her out."

Growing up in Pearsall with three siblings, Salinas became aware of the tensions between the Mexican-American and Anglo communities at an early age. Train tracks provided a strong demarcation between Mexican-American territory on the west side and Anglo territory on the east side of town. Salinas remembers how when her father went to the east side, there was often trouble with the Anglos.

"When I was a young girl, I recall my father telling me that when he was younger and had to go to the east side of town he would be verbally harassed and menaced by Anglos because of his race," she said.

Hernández had little choice but to visit the Anglo side. "My father would go to the market to buy meats and other groceries that were not available in the west side of town," Salinas said.

Even the schools were segregated. It was at Westside Elementary School that Salinas first encountered discrimination, in the form of children being prohibited from speaking Spanish – even though most of them, including Salinas, spoke no English until they went to school.

"We could not express ourselves at that time, and we didn't know how to speak English because my parents were not educated in English," Salinas said. "We didn't have a TV or anything where we could learn English."

She started learning English when she was 8 or 9, she said. All other Mexican-American kids she went to school with also learned the language in school. "The more outspoken kids seemed to learn the language better than the rest," Salinas said. "But it was difficult to grasp the language, I feel, because we would only speak Spanish at home and therefore were not able to practice it."

"At the time I was going to school, teachers were exclusively Anglo," Salinas said. "[Even] by the time Raza Unida was getting started and my children were starting school, there were only a handful of Mexican-American teachers, which was not representative of the population."

Salinas went to segregated school until the seventh grade, but then she stopped because she had to start supporting her family as the eldest of four children – as many Mexican-American children did back then. "I noticed that after the schools became integrated, more Mexican Americans continued going to school beyond middle school and actually completed high school," she said. "I obtained my GED (General Education Development diploma) years later at the age of 33."

Salinas married Alfredo Salinas, a Korean War veteran and farmworker, in 1955. The couple had eight children, all of whom went to school in Pearsall. Alma and Alfredo raised their children to be obedient and honest, but trouble still arose sometimes when they were in school.

"If things happen again and again, it's either you [or the teacher]," Salinas said. "I didn't tell them it was the teacher's fault. We didn't want to cause trouble."

To prevent any gossip and to protect her children, she would not blame their teachers. If it ended up being the teacher who was at fault, Salinas would go to the principal or even the superintendent to fix the problem.

"The problems that our children in high school faced were usually resolved by the principal, but only after a group of us parents would pressure the principal to act," Salinas said.

Discrimination was not restricted to Pearsall schools. It was pervasive in everyday life. Over the years, Salinas witnessed how Mexican Americans were denied treatment at hospitals because they could not pay the required $50 admission fee; she saw how people were denied the right to vote because they could not afford the poll tax; and she saw how people were sent from one precinct to another to try and discourage them from voting.

"Everyone, including Anglos, had to pay a poll tax and hospital fees, but because of economic disparity the majority of Mexican Americans could not afford to pay these fees," Salinas said.

Politically, Salinas had always been a Democrat. When John Kennedy ran for president in 1960, Salinas voted for him. At the time she believed that the Democratic Party was the best option for her people. While Kennedy was in office, she was able to afford a house because of the Fair Housing Act, which ended discrimination in housing. Before Kennedy passed the executive order, there was no way her family would have been able to afford housing. At the time, she was working with special needs children in schools.

"It was because of an FHA loan through the Fair Housing Act that we were granted the opportunity to buy a house," she said. "I still live in this same house built in 1970."

She has returned to being a registered Democrat today.

Mexican Americans are better off today and have more political rights, but Salinas said much remains to be done. And Mexican Americans must be working to make progress. With the changes that happened, Salinas said she has finally seen improvement for the Mexican-American community, but the fight is not over.

"I always remember Kennedy [saying], 'It's not what the country can do for you, it's what you can do for your country,'" Salinas said. "And that's true. If we work peacefully and for that goal, it's going to turn out right."