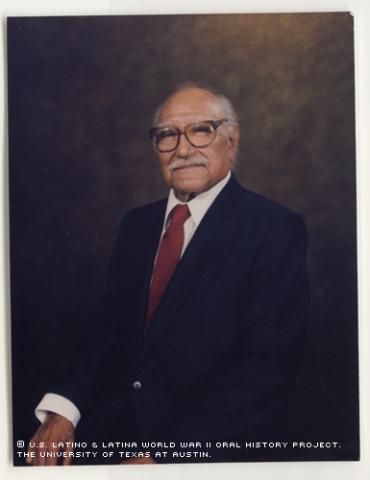 Alfred Castro was the son of an accomplished musician, who recognized early that Alfred had a natural gift and did all he could to foster the boy’s musical growth.

Castro’s father, Luis Castro, who played the trumpet with the San Antonio symphony at theaters during the silent-movie era, even went so far as to restrict his children's more active pastimes to protect their musical prowess and potential. In doing so, he ensured Castro would be able to share his talents with people across the globe. As an adult, Castro's trio, Al Castro's Marimba Sounds, played for presidents and princes visiting San Antonio.

Born in Laredo, Texas, on June 11, 1914, Castro followed a long line of accomplished musicians. During the Depression, the family lived part of the time in San Antonio, where Luis would gather his young son and three or four other adult musicians to play for tips. Alfred, a musical prodigy, could ensure they’d make good money. Through guidance from his father and dedication to his craft, Castro played violin, marimba, vibraphone, snare drums and the glockenspiel.

Castro's family moved frequently to assure a better life for the family. As the family continued to move across the state of Texas, he says they often suffered discrimination. As he grew older, Castro played in different venues around San Antonio, including theaters, special events such as weddings, and taxi dances, where men would pay 10 cents per dance to glide around the room with the girl of their choice.

While performing at a Mexican Tent Show, La Carpa Garcia, Castro met his first wife, Aida Garcia. Together they had a daughter named Aida. But Aida died of tuberculosis, leaving him to raise 20-month-old baby Aida.

After the death of his wife, Castro traveled to New Orleans to play with one of his father's friends. Musicians were needed to play at the Court of Two Sisters restaurant nightly and Castro was encouraged by his family to pursue the opportunity. He moved to New Orleans, and it was there where he met his second wife, Ruth Piquenot, who had a son, Danilo, whom he later adopted.

While performing in New Orleans, Castro was drafted May 25, 1942. He was immediately sent to Camp Livingston in Louisiana, and then to Macon, Ga., for basic training. Castro remembers an instance of discrimination while riding a bus after the completion of his training: Castro was sitting near the front of the bus and was instructed by the driver to move to the back. When he refused, the driver warned him he’d call in the military police, but Castro still didn’t move. When the police arrived, they asked Castro for the name of his outfit and told him, "Soldier, you can sit wherever you want," recalled Castro’s third wife, Aurora Gonzalez Castro.

Upon completion of his basic training, Castro was transferred to the 132nd Engineer Combat Battalion at Camp Framingham in Massachusetts. After his arrival, he was again transferred, this time to the band. When the unit was ordered to Europe in 1943, Technician 5th grade Castro was assigned to the Dakota National Guard Band. In February of 1945, he was sent to Camp Stewart in Georgia, where his band was broken up. Soon after, Castro was assigned to an anti-aircraft outfit heading to Japan. While in preparation for Japan, Castro heard the news the war was over.

After being discharged, Castro, his wife, Ruth, and their son returned to her hometown of Fort Wayne, Ind., where he continued to play his music and work in factories to supplement his musical aspirations. The two divorced in 1968.

Later that year, Castro married his half-brother's widow, Aurora. The two had one son together.

Castro's trio, Al Castro's Marimba Sounds, became well known in San Antonio as the leading marimba trio. The trio played for President George H.W. Bush and Barbara Bush, and, later, at a state dinner in San Antonio hosted by President Bush for Latin American presidents. He also played for a Moroccan prince, Prince Moulay Abdallah Alaou, in 1997, according to an obituary in the San Antonio Express-News.