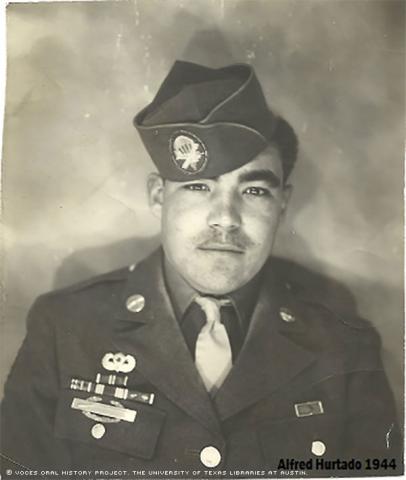 If anyone deserves to be called an American war hero it's Alfred Hurtado.

Hurtado's unit, the 82nd Airborne Division, 504th Parachute Infantry Regiment, 3rd Battalion, Company H, participated north of Anzio, Italy, in Operation Shingle, an amphibious landing by Allied troops against German forces. Hurtado did not clearly remember the Normandy Invasion, but he did recall that his unit had landed behind enemy lines in Normandy, and he lost many of his friends.

After the Normandy landing, Hurtado and his unit were moved to Nijmegen, Holland, for Operation Market Garden, which was an unsuccessful Allied attempt to clear a path on land for the Allies to strike Germany from Holland. Hurtado served as a sergeant in that effort. The unit took its third jump and did not encounter resistance, he recalled. But when it tried to cross a river to capture a bridge, the Germans took many of the Americans prisoner and sank their boats. Hurtado said he remembered seeing bodies everywhere and grabbing rifles and grenades. But he did not remember coming out of the battle.

On Dec. 18, 1944, Sgt. Hurtado faced his last battle in Ardennes, Belgium. He had trouble remembering the battle, but Hurtado said that the American soldiers had captured Germans soldiers during the Battle of the Bulge. The Germans surrendered and were then let go. Hurtado was wounded and ended up in Veterans Hospital in New York, with injuries to his thumb, mouth and teeth. He was discharged on May 17, 1945.

He returned to his hometown of Denver, Colo., where he had attended Mitchell Elementary School and Cole Junior High School.

Hurtado's military career had started in a sense at the age of 16 when he joined the Civilian Conservation Corps (CCC). He turned 17 when he was in the CCC and then was drafted into the military on March 4, 1943.

Before going into the Army, he married his girlfriend Antonia Padilla, and the couple had their first child in August of that year. Hurtado said his family was sad that he was leaving. His mother cried and asked him not to go, but Hurtado said he had a duty to serve his country.

Hurtado completed basic training at Camp Roberts, California. There, he said that he had prepared for war, but was never really ready for war until he was in it. Hurtado was one of many Chicano soldiers at the camp, but he said he was known as the guy with the guitar. His fellow soldiers would always ask him to play his guitar, although sometimes he said "No strings!" to get out of playing. After spending 13 weeks in California, he was sent to Fort Benning, Georgia.

Hurtado was then sent overseas, although he was not really sure where he was going. His unit landed in North Africa in September 1943. Hurtado stayed in Casablanca, Morocco, for several months.

He recalled that during that time, his unit had to clean up runways at the airport and sweep out caves, looking for German stragglers in the North African mountains. Hurtado, a private, was first hospitalized in Morocco after being shot during one of those sweeps.

On July 9, 1943, Hurtado took his first airborne combat jump around the town of Gela in Operation Husky, the invasion of Sicily, which began the Allied march up the Italian Peninsula. He and others in his unit parachuted into the ocean, and Hurtado said he lost many friends.

In Salerno, Italy, during Operation Avalanche, which started Sept. 9, 1943, Hurtado arrived at the port of Naples. It was from that area that he made his second combat jump. During combat, he was shot on a thumb and a leg. Hurtado could not walk and was carried to the hospital.

After the war, Hurtado returned to his hometown of Denver. He and his wife, Antonia, had three more children. Hurtado then started Al's Trucking, and he had been in business for more than 50 years at the time of his interview.

In April 2006, three days short of their 64th anniversary, his wife passed away. Hurtado remembered that she often helped him deal with his post-traumatic symptoms and would always ask, "What's wrong, Al?" when he had flashbacks.

Hurtado said that he was greatly affected by his war experiences. But he also learned how to better appreciate life.

"You know the Big Man up there? You ask, and you shall receive," he said. He said he tried not to talk too much about his war stories. And he would not encourage his children or grandchildren to join the military.

Mr. Hurtado was interviewed by Joseph Padilla in Denver on March 4, 2011.