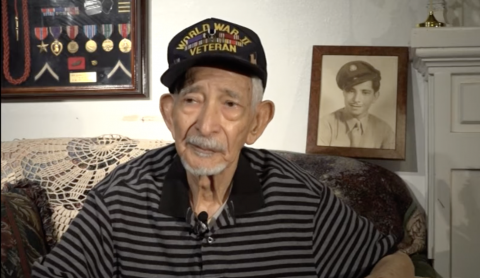 After being struck by shrapnel on a German battlefield on Nov. 27, 1944, 20-year-old Alfonso L. Davila, of Corpus Christi, Texas, was dragged to a big foxhole where he lay next to dead soldiers for five hours.

“It was the first time I ever saw so many dead soldiers,” he said.

Finally, he was rescued and sent to a hospital in Liverpool, England, for four months. He was reassigned to the Air Force’s 53rd Troop Carrier Squadron 61st TC Group and traveled to Trinidad to help with the war efforts there. Davila was well-received.

“When I got off the plane, they all went around me, like if I were something big," Davila said. "You know why? I had my Combat Infantry Badge here, see? And that means that you had been on the front line.”

Davila was discharged in 1945. In time, he began working at a commissary at the naval base hospital in Corpus Christi. He retired at age 55.