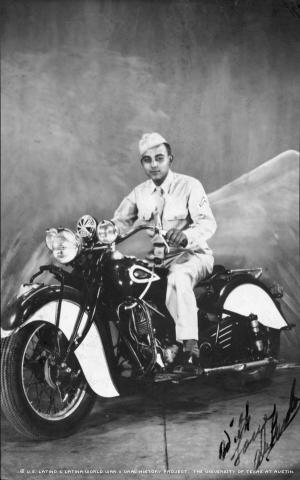 Rocking back and forth in a squeaky computer chair, hands folded in his lap, Abelardo Garcia chuckled as he relived having played match-maker for his fellow Army soldiers in a quaint beer hall in Czechoslovakia in 1945.

“I really enjoyed life, no doubt about that,” Garcia said.

“I had a good time because I never went to war,” Garcia said. “I was always in an office.”

Among other memories, Garcia recalled some of his outings.

“I used to go to a lot of dances over there,” Garcia said. “I loved dancing.”

He recalled attracting attention in Czechoslovakian dance halls in 1945.

“The girls always wanted to touch my hair because it was so black,” Garcia said, running his hands along his scalp.

Garcia recalled having to convince his friends to go with him because they were all so shy, and he would have to walk up to girls and ask them to dance with his friends.

“I would point at him, then point at her,” Garcia said with a laugh.

One time, Garcia even ran into one of his brothers in the main dance hall that he and his friends frequented.

“His company was overseas, and he found me,” Garcia said, adding that his brother spent two nights with him.

Garcia, who was born Dec. 3, 1922, in Beeville, Texas, was the second oldest of seven sons and five daughters. He recalled his family not having much money, but always having enough food and childhood necessities, like a homemade baseball and other basic toys.

“We had a good life, no doubt about that,” Garcia said.

As a Latino boy growing up in poverty, Garcia developed an appreciation for close relationships and personal pride.

“We had a nice home, nice parents, no trouble,” Garcia said. For example, he recalled the children sitting often around their mother’s bed while she told stories.

They were all respectful and dependable, said Garcia, adding, “We always came home when we said we would.”

Garcia recalled his father being a hard-working rancher, teaching his sons to take pride in their accomplishments.

“I went to sixth grade,” Garcia said. “I learned English at school, and I learned how to read Spanish [on my own] at home.”

Garcia said his father would take the boys out of school in the summer to work in the fields.

“We picked cotton,” he said, “Everyone helped.”

Garcia said he never imagined going to war, but then realized a world of adventure lay before him.

Garcia was 21 when he was the first of five brothers to be drafted. “I never cried in the service, but I cried then,” Garcia said. “I was afraid. I didn’t want to go to war.”

He was inducted into the Army on Jan. 13, 1943, at Fort Sam Houston, in San Antonio. He completed basic training at Camp Barkeley, 11 miles southwest of Abilene, Texas, and then was shipped to France to begin his WWII tour.

“France and Germany were very different from Beeville,” Garcia said, “They were really pretty, especially France.”

Garcia laughed when he remembered the first big difference he noticed when he arrived in France.

“There were restrooms in the middle of the [public] square,” said Garcia, remarking that he could see people’s feet hanging out at the bottom.

While overseas, Garcia said he maintained a sense of responsibility toward his family.

“I was paid $50 a month and [sent most of it] home to my mom,” Garcia said. “The rest of my money I would spend on cigarettes and cider.”

Garcia corresponded with his family and girlfriend through military v-mail. He recalled sending his girl a letter once in which he put X’s and O’s at the bottom.

“The military scratched it off because they thought it was some kind of code,” Garcia said.

After three years in the Army, Garcia received news the war was over. It was summertime, but he kept thinking of the song “I’ll be Home for Christmas.”

“It was my favorite song,” he said.

Pfc. Garcia was honorably discharged on March 25, 1946. For his service, Garcia received a WWII Victory ribbon, a Good Conduct Medal, an American Theater ribbon, and a European-African-Middle Eastern Theater ribbon with one Bronze Service Star.

Garcia returned to Beeville and married his longtime girlfriend, Sulema, in April 1946. At the time of his interview, the two lived in a nursing home in Beeville.

When asked if he had any words of wisdom for young people, Garcia said, “Oh, I don’t know … Here, [at the nursing home] everyone’s nice to me because I’m nice to them. That’s the way to be treated.”

Garcia continued to rock in his chair, hands folded across his chest, a distant look in his eye.

“I was asked if I ever went on pleasure trips,” he said. “I said ‘Yes, and it didn’t cost a penny.’ I went all around the world during the war.”