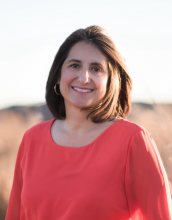 For more than two decades, the award-winning Voces Oral History Center has made it its mission to document the experiences of Latinas/os in the U.S. — a colossal task for its small crew of mostly part-timers and interns.

UT journalism professor Maggie Rivas-Rodriguez, founded Voces in 1999 and has served as its sole director since.

“As Voces has become more successful and complex, it has needed a full-time staff director dedicated solely to its work," Rivas-Rodriguez said. "Voces’ work in documenting, disseminating and preserving recordings of Latinas/os in the U.S. is substantial. But there is so much more we can do, and it will take fresh eyes to see potential new programs and activities.”

In addition to her previous role as deputy director of New Mexico Historic Sites, Navarro McElhaney also served as a primary investigator in the Bracero Archive Project, a partnership of organizations that interviewed former braceros throughout Mexico and the U.S. She was director of the Oral History Institute at the University of Texas at El Paso from 2000 to 2016 and then served as a research administrator at Arizona State University’s School of Historical, Philosophical and Religious Studies.

Navarro McElhaney earned national acclaim in the world of oral history when, from 2016 to 2018, she stepped in as interim executive director of the Oral History Association, the largest organization of oral historians in the country, after the death of its longtime founding executive director. Navarro McElhaney was credited with initiating several improvements in the organization before she stepped down.

“Kristine has demonstrated that she has amazing vision, close attention to detail, excellent collaborative spirit, and is not easily daunted. That’s exactly what we need.”

Along with her new role at Voces, Navarro McElhaney will also take the helm as the president of the National Council on Public History, a membership association dedicated to encouraging collaboration between historians and the public.

James Aldrete is chair of the Voces Resource Council, which provides networking and fundraising support.

“Having someone with Kristine's experience and passion for oral history as our first assistant director is a game changer for Voces," Aldrete said. "It means the capacity for greater outreach, education and awareness, more consistent leveraging of our archives for content that continues to have relevance to current social issues, and more collaborations with other departments and institutions. We are doubling down on our commitment to ensure the Latino/a experience and contributions to our country is told.”

Rivas-Rodriguez, who also serves as the director of the Center for Mexican American Studies, was inspired to create Voces when she as a journalist was reporting on the civil rights contributions of the World War II generation of Mexican Americans. She became aware that there was almost no research on the topic and made it her life’s work to fill that gap.

Since its founding, Voces has produced five books on the WWII generation of Latinos/as. In addition to its work collecting narratives of veterans from the World War II, Korean and Vietnam War eras, Voces has also documented the history of political and civil engagement, professions and cultural contributions. In 2020, it spearheaded Voces of a Pandemic, an ongoing multi-university effort to record the Latino experience during the pandemic.

Voces’ many activities include the publication of an annual, peer-reviewed journal, daily public radio stories about Latino/a notables during Hispanic Heritage Month, conferences and symposia, books and other research, short documentaries, and written journalistic treatments of long interviews. The center will celebrate its 25th anniversary in 2024.