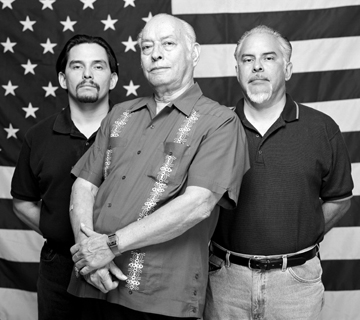 Note: This is an archived site for Defend the Honor. All text seen here appeared on the original website. A preview of the site as it appeared in 2007 can be viewed in the link below through the Internet Archive's Wayback Machine.
Due to Adobe ending Flash support some links may no longer be accessible.
Original Site View

The impetus for Defend the Honor was a 14.5-hour World War II documentary by Ken Burns, airing on PBS in 2007, which originally included NO Latino voices. Both PBS and Burns initially dismissed our concerns. But after an intense letter-writing campaign, petitions, protests and meetings, Burns relented and included interviews with two Mexican American veterans and one Native American veteran, all superb. The interviews were well done, but added on in what one critic called a “passive-aggressive” way, pasted on conspicuously after the conclusion of three episodes. The accompanying book had no reference to Latinos. To this day, Burns refuses to acknowledge the seriousness of our concerns and public broadcasting officials have called it “a dust-up.” Defend the Honor is the grassroots effort that developed from that 2007 effort, which included national and Latino organizations and elected officials and thousands of individuals. It continues to promote the respectful inclusion of Latino contributions to our country’s success.

The Defend the Honor campaign is a grassroots effort representing thousands of individuals and members of dozens of organizations working for a more fair and accurate inclusion of Latinos and Latinas in our nation’s consciousness. The issue is serious and the implications are substantial not only for today, but for our future, as the country’s Latino population continues to grow. We’re streamlined and we want to stay that way: no staff, all-volunteer, just a website and periodic emails about important issues, exhorting Defenders of the Honor to write letters, watch a documentary or movie, create a dialogue. Our only loyalty is to the truth about our greater Latino community.

The 2007 Ken Burns/PBS documentary is only one in many other examples of Latinos being excluded or stereotyped negatively in the entertainment and news media. If one is to look at our history books, one will find a staggering number of omissions of Latino contributions as well as inaccurate references to several issues and events related to Latinos. To counter that exclusion and misrepresentation, Defend the Honor continues to send out emails to its lists to address specific issues concerning the inclusion and respectful treatment of Latinos and Latinas. We not only will tell you about them; we’ll give you a plan of action, who you can write to, a petition you can sign, a protest march you may take part in. We are not victims if we are taking action. We invite you to stand up and be heard—exercise your First Amendment rights in the cause of justice.