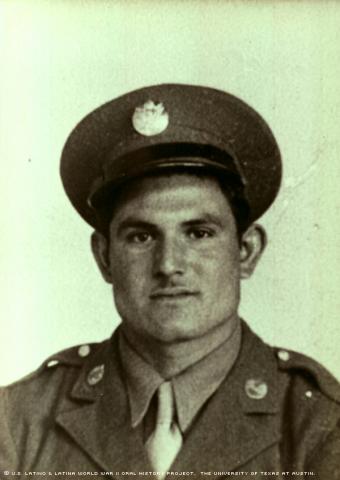 You don’t have to be in combat to be a veteran.

During World War II, Ysaac Elizalde provided the troops with the food necessary to give them enough energy to prepare for the horrors of combat. Elizalde would go on to make a career of this, delivering milk to thousands of homes in Corpus Christi, Texas, for more than 40 years.

Born in 1921 in Bee County, Texas, he doesn’t remember much from his youth. He says he didn’t feel the effects of the Great Depression to the same degree the rest of the country did.

“We always had plenty [of food],” Elizalde said.

His father, Ysidro Elizalde, prohibited him from attending school.

“My father would say, ‘Why do you need to go to school? Learn to work,’” recalled Elizalde in Spanish, adding that he never learned to read or speak English as a result.

By age nine, he was already working full time in the fields with his father. It seemed Elizalde was destined to work the fields for the rest of his life, until the day he was drafted when he was 19.

On Dec. 7, 1941, the United States was hit with a surprise attack on Pearl Harbor by the Japanese, and the small Bee County town of Beeville, where Elizalde lived, soon felt the impact. The U.S. declared war, and needed hundreds of thousands of men to fill the military’s ranks as a result.

Elizalde was soon drafted into the Army.

“They took us. Whether we were young or old, they took us,” he said.

The Army allowed Elizalde to branch out from the small ranch he worked on in Beeville and experience the rest of the world. First, he’d get shipped off to San Antonio, Texas, for four or five days. And then, for the first time in his life, he’d receive some formal education: For three weeks, he went to classes as part of his basic training in Fresno, Calif.

“I finally learned my ABCs,” said Elizalde, adding that he even picked up how to write a little.

After four to five months of basic training, he was shipped to Oregon as an assistant to the cooks. He peeled potatoes and dished out food in lines.

Little did he know, he’d spend the rest of his working years serving food to strangers.

For the last year of his short military career, Elizalde was stationed as a member of the Army Air Corps’ 306th Training Group at Sheppard Air Force Base in Wichita Falls, Texas, where he assisted the cooks. He never saw combat, and says he feels fortunate for that.

Elizalde was honorably discharged Nov. 5, 1943, at the rank of Private. He says he remembers his homecoming clearly because the first thing he did when he got home was ask his girlfriend to marry him.

She said yes, and 65 years later, he and Elumina Perez Delgado are still married. They have three grown children: two boys, Iszac and Eloy, and a girl, Nelda.

“I think us still being married is a great example for the younger generation. It shows we took our vows seriously,” Elizalde said.

Within 18 months, he found a job delivering milk in Corpus Christi. He’d spend more than 40 years delivering in the area, becoming the iconic milkman, now largely a part of American history.

“At first, I didn’t drive the truck; I just assisted the other drivers in loading and unloading their trucks,” said Elizalde, who still remembers the times big changes were made to the way milk was distributed. “First we used glass bottles, the cartons, then, finally, plastic bottles.”

Elizalde says he worked his way up the milk-services ladder from deliveryman to dispatcher, and that the hardest task was going to Houston to pick up dairy containers.

“I would come in at 12 midnight and it took a few hours to inspect the shipment, then, on a good day, we could make the round trip in four hours,” he said.

“Everyone was Latino mostly; there wasn’t a lot of prejudice going on,” he said.

He does remember a discriminatory incident from his return home after his service, however:

“We stopped in San Antonio to get some food, but the restaurant did not want to serve Mexicans,” recalled Elizalde, adding that a bystander came to his rescue.

“He told them that we were just as American as anyone in there; they are in service and they are troops.”

Elizalde says he left the restaurant with a full stomach.

At the time of his interview, Elizalde was 87 years old, long-since retired from the milk business and living in Beeville, to where he moved back to take care of his mother, Eusebia Cano Elizalde, until she passed away.

“I moved back here because I promised my dad I would take care of my mom if he passed away. He would say silly thing[s] like he wanted mom to die first so she wouldn’t suffer after he was gone,” Elizalde said.

His father died first, in 1983. Elizalde remembers the words he said to him to ease his mind:

Elizalde prides himself on owning his own piece of land and still being able to drive. He accepts that today’s young people are different from how he was, but urges them to look back to the past, so they can be grateful for all the rights and privileges they take advantage of today.

“Today’s youth does not know what it is to suffer,” Elizalde said.