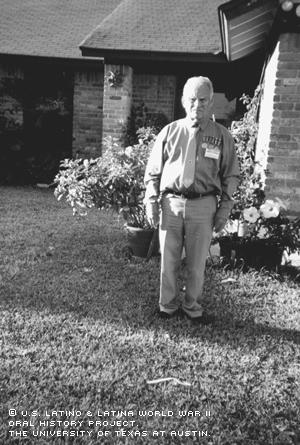 Like many World War II veterans, Willie Garcia married his bride right before shipping out of town to prepare for overseas combat.

In 1944, Marfa, Texas, native Garcia met Elizabeth Ruiz while stationed at Camp Swift. They dated for about three months. Two days before he was to be sent overseas for military duty, he asked her to marry him. Initially she said that she would rather wait, but when he persisted, she agreed.

After the wedding, Garcia returned to the base at Camp Swift. The next morning he flew to New York where he would stay until he was shipped overseas. He was stationed in North Africa and Italy before he returned to Austin.

The War's Toll on the Garcias

The war took its toll on Garcia: only six months after he was sent overseas, he returned from the war "100% disabled," suffering from post traumatic stress syndrome, also known as shell shock. He had been stationed where the battles were in North Africa and Italy. His job had been to take ammunition at night by train to the men on the front lines. He was then supposed to rest during the day. However, because of the war going on, he always had trouble sleeping. Once he returned home, the trouble continued. He would hear train whistles coming in his head. He would imagine that the environment he had left overseas still surrounded him.

"The stress was so bad he couldn't eat, he couldn't walk, he used to scratch himself [on the face and arms] and he used to hear voices," his wife said, adding that Garcia stayed in the hospital for an entire year before she was able to bring him home.

When Garcia was discharged, he was brought home, but doctors advised his wife not to live by herself with him because they were afraid he would get violent. The two lived with her parents for five years. Garcia never had a violent attack. The couple used the money they received from the government to help her parents pay bills.

After five years, the two moved into a home they built and Garcia began working as a tailor at Joseph's Men's Wear, a store that sold suits for men. They did not have a car, so they rode the bus to and from wherever they needed to go.

Elizabeth Garcia said that life with her husband was different for her after he returned. She said that he was not himself. She had to learn to be very patient and to understand that he was not the same person she had known before the war.

Adjusting to Life After the War

After the couple moved to south Austin, they got very involved with San José Church. They also began fostering children who needed a home. They fostered four children before they decided that they wanted a baby of their own. However, because of the electric shock treatments Garcia received in hospital, the couple was unable to have children of their own. They then decided to adopt two girls and dedicated their lives to raising them.

As of 2005 the Garcias, then 84 and 80, were residing on a ranch in Blanco where they raised goats and chickens. They were very involved in the Blanco community, regularly attending mass and visiting with fellow parishioners.

The couple's daughters, Ann Marie and Elizabeth, both lived in Austin. Ann Marie worked for Cima Strategies as an executive assistant and Elizabeth was a director at San Juan Diego Catholic High School. While both of the girls have families of their own, they remained close to their parents.

"We have been lucky that God has given us a long life," Elizabeth Garcia reflected.