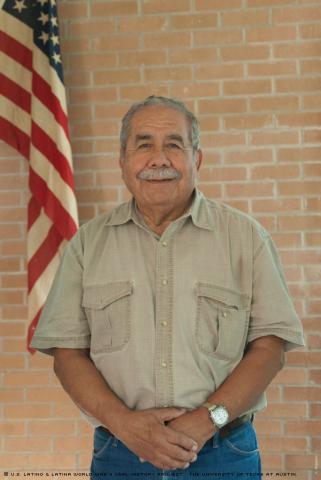 It took a war for William Zermeno to leave his hometown, Houston, and his beloved family. The Zermeno family shared a very close bond -- the brothers, particularly, would play and hang out together even as they grew older.

“We got along well. We played tag, hide-and-seek, rolled tires, made cars out of clay, and played army,” Zermeno said. “My parents were really strict, but very loving and kind. They always advised us to be good students in school.”

It was in 1945, when he turned 18 in December, that Zermeno signed up for military service. He felt it was expected of him because his cousins and his brothers had served in the U.S. Army Air Forces. “I never gave it a second thought,” he recalled later.

“My parents didn’t think too much about it since the war was already over,” Zermeno said. “I [was] not going to get killed.”

Zermeno was born on Dec. 2, 1927, in Houston. His father always worked at a railroad, even throughout the Great Depression, so the family didn’t worry about eating. “We always had food to eat,” Zermeno said. Ricarda, his mother, stayed at home and cared for him, his three brothers and his four sisters. “I was still young during the Great Depression,” he recalled later. “I didn’t feel any different from the others.”

“My father would tell us to treat others how you want to be treated,” Zermeno recalled.

Zermeno attended elementary, junior high, and high school in Houston. He graduated and then enlisted.

After junior high school, he began working as a bus boy at a restaurant downtown. It was hard for his father to support eight children, and Zermeno knew he had to help. He would split his earnings and give half of it to his mother. With the money he earned, Zermeno bought his own clothes. “Even though it wasn’t much, it was something,” Zermeno said.

He served in Georgia and North Carolina in the U.S. Army Medical Corps. His duties included caring for soldiers injured in the war. When the draft was ended, he decided to re-enlist in the Regular Army. When his time of service ended, he was discharged in Augusta, Ga.

“‘So glad it’s over. We don’t have to worry about any family getting killed,’ ” he remembered saying at the time.

After Zermeno was discharged he returned home in 1947 and married his wife, Estella Martinez Zermeno, in 1948. They secretly dated for a while before Zermeno’s father went to talk to her father to get permission for her to marry him.

“She wasn’t allowed to date so she would tell her parents she was going somewhere else, and we would meet downtown,” Zermeno said.

Zermeno took advantage of the GI Bill to buy a house. He worked as a clerk at the U.S. Postal Service. He and his wife worked at the same post office but on different shifts so they could take turns caring for their four children.

Looking back at his military experience, Zermeno knows he was one of the lucky ones. He may not have served as long as others, but he feels he did his part in serving his country. “I didn’t do much in contributing,” he said, but he feels that he did his duty. He later added that “I never expected to receive any awards.”

Zermeno said he did not suffer any post-war stress disorder. “It never affected me,” he said.

To Zermeno, everything he was involved in was a great experience, and he’s glad that he did what he did. “There was no danger. I wouldn’t take the experience and the things I learned in exchange for anything,” he said.

Mr. Zermeno was interviewed in Goliad, Texas, on July 20, 2010, by Elizabeth Blancas.