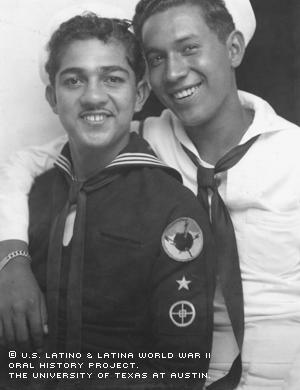 After getting discharged from the Navy in 1948, Wilfred Navarro, Jr. returned to his hometown of Houston. He finished high school and decided he’d like to be a police officer. But first, he and other Latino veterans would have to overcome institutional racism.

Navarro was the third Latino officer hired by the Houston Police Department and would go on to serve for nearly five decades in many capacities, including high-level administration. His wife, influenced by her husband’s example, would later become a police officer.

But breaking down barriers required perseverance – his first step was to attend some meetings, arranged by the League of United Latin American Citizens (LULAC), at the civil court building in Houston. While there, he learned his height might keep him off the force.

“L.D. Morrison, who was to later become chief of police, was there, said that the reason they didn’t have any Hispanics – well, he didn’t call us Hispanics back then, he just called us Mexicans – [was] because we were too short,” Navarro said.

“He wanted to know how many people were there that had graduated [from high school] and were at least 5 feet 10 ½ inches, so I held my hand up. [I] went and applied at city hall and they turned me down, said I wasn’t tall enough. I was 5/10, half an inch too short,” Navarro said. “I didn’t get discouraged; I went back and reapplied and was turned down again, same reason.”

Navarro was hired on as a police clerk, and after three months of typing, he made a friendship that changed his life.

“There was a lieutenant, by the name of Joe Clark, who befriended me that knew that I wanted to be a police officer,” Navarro said.

Lt. Clark told Navarro he was taller in the mornings than he was in the afternoons and that he should go down to city hall and demand they measure him in the morning.

Navarro did this, and sure enough, he made the height requirement. He went to the police academy and graduated Dec. 24, 1950.

“When I first joined the department in 1950, there was obvious discrimination then; today there is probably still some, very subtle,” Navarro said.

“There was one occasion when I had one officer that just flat wouldn’t ride patrol with me,” he said. “They wouldn’t even let black police officers write traffic tickets to non-blacks.”

Navarro adopted an “If you can’t beat them, join them” mentality, becoming active in the police officers association and eventually making it onto the board of directors.

Navarro was joined in the field of law enforcement by two of his three children. His wife, Armandina De Hoyos Navarro, also eventually became a Houston police officer.

“She wanted to be an HPD officer from the [outset], but whenever they opened the doors for females to become officers with the HPD, they said they had a nepotism rule that she couldn’t join because of me already being with the department,” Navarro said. “But lo and behold, here comes this Anglo guy – his wife, she became a police officer.”

Armandina worked as a parking meter monitor for more than a decade, and, at the age of 47, went to the police academy.

“It was tough on her, the physical part, but she made it,” Navarro said.

“Shows you how time changes things,” he said.

His daughter, Yvonne Navarro Bonner, works for the U.S. Marshal Service; son Wilfred was an FBI agent before becoming a lawyer. His other daughter, Criselda Levett Navarro Camarena, has a tax- and immigration-service company.

Navarro lives in a condo in Houston, the same city he was born in on March 27, 1929. When he was growing up, opportunities were limited for boys like him.

His mother, Petra “Betty” Perez Navarro, was born in Crystal City, Texas. She married Wilfred Navarro, Sr. there after he immigrated to Texas from San Luis Potosí, Mexico, with his parents when he was a young man.

A mechanic by trade, Wilfred Sr. settled with Betty in Houston around 1927, where Wilfred worked as an auto mechanic in various garages and would eventually open Navarro’s Garage.

Navarro had two sisters and a brother. Their father encouraged them to find other work than in the garage.

Navarro started selling the Post on a street corner when he was 9 years old; he later delivered the Houston Press and the Houston Chronicle for 3 cents a copy.

His mother was a housewife until her children were teenagers; she then became a department-store salesperson.

“She was a strict disciplinarian,” Navarro said. “My mother used to tell us that you need to be speaking English, because when you speak Spanish, people don’t like it.”

On the other hand, when Navaro was 12 years old, his father sent him and his sister, Olga, to Mexico to learn Spanish, because he didn’t want them speaking “Tex-Mex.”

While there, Navaro heard about Pearl Harbor.

“Twelve year olds don’t get too excited about what’s happening around the world, but we were in Mexico and of course it was all over the news and there was talk of Mexico not letting non-citizens out of the country, so my parents immediately sent after us and we came back to the State[s],” Navarro said.

After turning 17, he impulsively decided he wanted to join the military early, which required a parent’s signature. His father reluctantly agreed, and Navarro went into the Navy in 1946.

“At that particular time, I decided I wanted to go to the service, which, you know, looking back now, was a bad decision,” he said.

Navarro was shipped to the Philadelphia Naval Yard by train and then boarded the USS Huntington, a heavy cruiser he’d call home as a deck hand for the next 18 months. The Huntington traveled to the Caribbean, then on to Italy before returning to the States.

Navarro eventually spent some time on another heavy cruiser, the USS Albany, before being discharged from the Navy in February of 1948.

“They needed to get rid of some people – they had budgetary problems back then, too, so they offered early releases, so I took it. I got out. ... I came back home, back to Houston,” he said.

In Houston, Navarro finished up his Sam Houston High School education, and then attended the University of Houston “for a semester or two.” He recalls earning 60 credit hours.

Education is the key to the world, he says, and while he thinks he has had a pretty rewarding life, there’s always room for more, he says.

Mr. Navarro was interviewed in Houston, Texas, on February 10, 2004, by Paul Zepeda and Ernest Eguia.