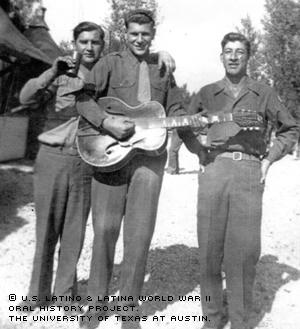 Valentín Aguilar says he feels proud that he served during World War II.

Born in Laredo, Texas, Aguilar only received a second grade education. He made a living picking vegetables on a community farm. Aguilar's eyes would soon be opened to a vast new world by participating in the U.S. Military. Aguilar became a soldier in the Army on December 3, 1942. After being inducted at Fort Sam Houston, he trained for over a year with the 84th Division.

"I was transferred to the 85th Division overseas duty. I landed in Italy, I fought on the front line for about eight to nine months," Aguilar said.

Aguilar was sent to Italy as a replacement after the existing 85th division troop was captured by the Germans.

"The Germans had the artillery set up to zero in on the field mine. [The soldiers] didn't get out of that place fast enough, so they got caught with a lot of artillery," he said.

At the beginning, Aguilar was assigned to what was referred to as the "Mopping Up Operation."

"Picking up, you know, the soldiers and putting signs where they were, putting bayonets on the rifles and stick it on the ground and put a helmet on the top as a sign that a solider was killed there," he said.

On October 4, 1944, while on front line combat, Aguilar fought on the Gothic Line, which was considered one of the biggest battles fought during the Italian campaign in World War II. The battle began on July 30, 1944 at the urging of British Prime Minister Winston Churchill. Churchill wanted to destroy the German Army in Italy and bring theAllied forces into the Balkans before the communist army arrived.

Aguilar said fighting on the Gothic Line was difficult because of the terrain.

"The Gothic Line is composed of a bunch of hills," he said. "So it's very, very high and the level is very steep."

He also remembered other anti-invasion defense that the Germans used.

"[The Germans] had pillboxes and once you get near those pill boxes, they throw a flare and they can see all the soldiers coming up... They start shooting with their machine guns at night time and there's no chance you can kill them," Aguilar said.

The pillboxes were concrete forts of hiding, which allowed the Germans to shoot at the allies without being seen. The German use of the pillboxes along with familiarity of the region during this two-month battle proved dangerous for Aguilar and his group of soldiers.

"They caught us in a little creek and in a bunch of small trees and they pounded out with more shells," Aguilar said. "One of our soldiers got killed, so we had to withdraw back to the unit."

During the battle, Aguilar was wounded when shrapnel entered his left lung.

"What they did is just put a bunch of bandages around my chest. I couldn't get up," he remembered.

He was taken to a field hospital for his injury, but couldn't receive help because the hospital didn't have the proper equipment for the removing procedure. But even through his painful experience, Aguilar remembers the good points of his recuperation in Rome, Italy.

"They flew me in an airplane and when we landed, it was a good moment," he said, with a smile. "Pretty moments because there were a lot of nurses there. Pretty nurses gave us coffee and doughnuts."

Because of his wound, Aguilar was taken off the front line and given the duty of guarding German prisoners of war.

At first, Aguilar was not thrilled with the new assignment.

But he began to take pride in his position as guard of the Main Gate when he realized the respect he was given by other officers.

"I was very proud because when every time they have a German detail, the colonel is supposed to salute me first and then, I had to return the salute," Aguilar laughed.

"That was something the other way around in our army. But this time, the German colonel is supposed to salute me first," he said. "I felt very good about that."

For his service in the army, Aguilar has received many awards including the Purple Heart, the European Theatre Operations, the Good Conduct medal and the Combat Badge. Among his awards, Aguilar is pleased most about his Bronze Star.

"They pinned that medal, [Senator] Phil Gramm congratulated me," he said. "And from that day on, I felt very proud and I felt like I did the right thing for this country," he said.

After being discharged from the army on May 14, 1946, Aguilar came back to Laredo to live and make a difference in his community. He has worked for 42 years as an upholsterer and furniture refinisher.

He married Olivia Medrano on Sept. 6, 1951, and is the proud father of five children. He has 10 grandchildren and four great grandchildren. Aguilar has continued to make a positive impact on the people around him. He is member of the Disabled American Veterans, Vice Commander of the G.I. Forum, Senior Vice Commander for the Laredo Veterans' Hall of Fame. He is also the chairman of the Laredo Veterans Commission, and, in that capacity, has petitioned the Laredo city council for $120,000 to build a monument for Latino war veterans of World Wars I and II, Korea and the Vietnam War.