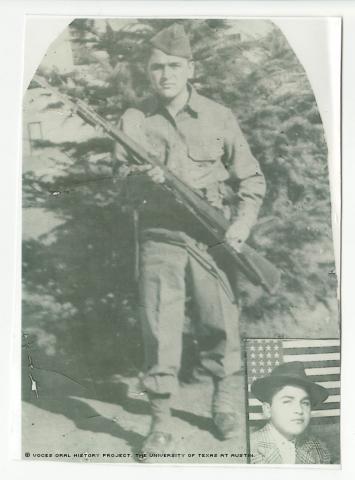 Born and raised in the small town of Beeville, Tomas Mata Treviño knew little about the world beyond his South Texas community when he was drafted into the Army in 1945.

Having never even ventured beyond Beeville's borders, he was scared when he received a draft letter two months after registering. About 40 other local residents were called to duty at the same time.

"We were scared but there was nothing we could do. … At that point, two or three had been killed in the war from Beeville," Treviño said.

The vast majority of the drafted 40 were Latinos, with only a few being Anglo.

The Army took Treviño to Fort Lewis, near Tacoma, Washington, for basic training, where the chilly temperatures made a strong impression on the young man from South Texas. Uncle Sam then sent Treviño to Camp Stoneman, the Pacific Theatre replacement center, near Pittsburg, California, where he was informed the war was over.

Although the conflict had officially ended, the soldiers abroad still had plenty of work to do, so the military sent Treviño to Japan. The medical ship to which he was assigned took food, supplies, music and magazines for the soldiers. The music would be used to have dances on ship and bring entertainment to the soldiers. Country-western was the genre of choice for many of those dances, Treviño says.

He remembers passing under the Golden Gate Bridge as the ship left San Francisco. He had never even seen a body of water, and he was now crossing an ocean to help the wounded in Japan.

Treviño seems to go back in time as he describes how the waves rocked the ship, gently gesturing with his hands. Traveling by sea was a difficult adjustment, as "the water gets really rough," said Treviño. He was so seasick during the voyage that he lost several pounds the first week.

It took 29 days to get to Japan, with a one-day stop in Hawaii. Once in Japan, Treviño said, he helped retrieve soldiers who had been wounded in battle and others who had been prisoners of war.

While aboard the ship, he initially worked in the kitchen, then was transferred to transportation services when the medical ship was no longer needed. He recalls having about 300 wounded and ill soldiers onboard and says they would tell tragic stories sometimes when he delivered their meals.

Social life onboard was different from Beeville, Treviño also recalls, in that Latinos, Asians and Anglos all got along pretty well, especially when talking about what they missed back home. One of seven children, Treviño found being away from family to be the most difficult aspect of military life. Treviño was born to Onesimo and Francisca Mata Treviño on Feb. 5, 1927. Two of his brothers served their country in the Marine Corps.

Once back in the States, he says he still experienced discrimination, even as a war veteran. He remembers a café that wouldn't serve "Mexicans" in the front. If they wanted coffee, they could only get it through the back door.

"It was sad, coming back from the service and being treated that way; true, I did not fight, but still … ," he said.

Treviño acknowledges, however, that the U.S. has made significant strides toward civil and racial equality since those days.

"People are mixed now. Before, if a Mexican looked at a white person, they could report you," said Treviño, half-joking.

Upon returning to Beeville in December of 1946, he went back to work at the Keller Hotel, where he had gone to work at age 14, when he dropped out of school to help his family.

At the hotel, Treviño met his wife, Maria Eva Vargas Ebro. He later worked as a trash collector for the city for 17 years, until he suffered a heart attack that he says left him unable to work, adding that his military benefits have helped with his health costs.

Treviño and Maria have seven children. They tried to give their kids what their humble childhoods couldn't provide, says Treviño, adding that he didn't know about bicycles or toys as a child but that his father worked hard and gave them what he could.

Treviño has a little trouble communicating with his grandchildren, since some speak only English and his language of choice is Spanish. He recognizes the opportunities available to his grandchildren but also warns of all the distractions they have competing for their attention, such as television.