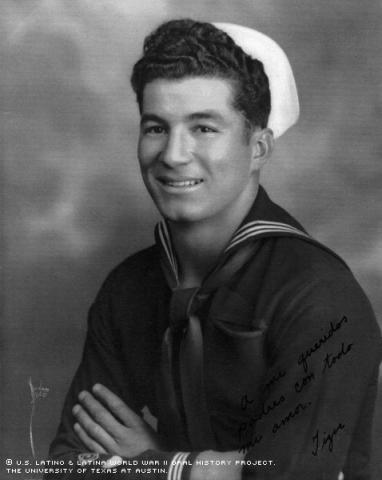 Although he faced criticism from minorities for fighting in the war, Tizoc Romero, a veteran of World War II, feels his involvement in the war opened the doors to a lifetime of achievement.

During the 1930s, or Great Depression period, many Americans, especially minorities, faced the hardships of poverty, war, discrimination and an economy that excluded many of them. Romero witnessed a troubled country.

Born in San Diego, Calif., in 1924, Romero was the youngest of seven children, and the only sibling to be born in the U.S. Romero's mother was born in Sonora, Mexico, and his father grew up in the coal mining area of southern Arizona. His parents met in Sonora, where they had their first six children.

Upon arriving in San Diego, Romero's father labored as a carpenter when work was available, while his mother took care of the children and provided food to the many squatters from around the U.S. who came to California in search of work.

"We were very poor, which wasn't unusual even for white people, but minorities suffered economically more than others," Romero said.

As a child, Romero was exposed early on to American culture. He was the first in his family to graduate from high school. While in elementary school, he faced the pressures of a predominately Anglo environment that forced minorities to adapt to the norms of a white majority.

"We never did speak Spanish in school because we wanted to Americanize as quickly as possible, so we never spoke Spanish outside of the home," he said.

Romero was a junior at San Diego High School when he learned of the bombing of Pearl Harbor that prompted the United States to enter WWII. Romero was with some friends at an auto race when they announced over the loud speaker that the Japanese had invaded American territory.

"We were too young for it to set in and were unaware of the awesome horror of it all," he said. “After news footage a year later, we learned of the effects of the bombing."

After the attack, Romero was uncertain of his future, but he completed his final year of high school before entering the military.

Romero's community, as well as the rest of the nation, was in disbelief after the Japanese invaded Pearl Harbor. Against his mother's wishes, he enlisted in the Navy.

Aboard the Coast Guard vessel Admiral W. Al Capps, Romero began his contribution to the U.S. military. He, along with his crew, served at port security for San Diego. Their duties consisted of transporting battle-weary marines to a neutral location to rest and recover. Although Romero's vessel wasn’t in actual combat, there were moments when he wondered if it might be.

"We thought that we would be involved in the invasion of Japan, but they surrendered and the war ended," he said.

Overall, WWII had numerous effects on the soldiers, especially those in combat, and for many, it changed their perspective on life.

"Many of the soldiers couldn't talk about their experiences in the war and I could understand that because I saw what they went through," Romero said. "For me, it really changed my perspective on Mexican Americans and how we were as patriotic and vulnerable as the next person."

He also became a family man, marrying Margaret Ramirez and raising her two children as his own. The couple also had one son. They divorced after 13 years of marriage.

In his early 30s, Romero attended San Diego State University, where he received a degree in education.

"I suppose I wanted to make a difference," he said. "Being a barber was O.K., but I guess I needed a challenge."

Romero then began teaching at Memorial Junior High, his alma mater, and it was here that he became active in the Chicano Movement of the 1960s and 70s. He was involved in several demonstrations involving minority civil rights, as well as in organizations such as the Mexican American Educators Organization and the American G.I. Forum, a Latino veterans group.

Politically we supported Cesar Chavez," Romero said. "We were not militant, but we did try to influence people of the cause, which was to establish more rights for minorities."

He is now retired after teaching at Memorial for 26 years.

"Education is the basic thing to work for," Romero said. Educate yourself in a broader sense and have goals, because without goals you're kind of lost."

Romero advises today’s youth to be tolerant, to reach out to see others' views, and to be understanding.

Although it helped change his life, he has mixed emotions about war.

"War is never any good," Romero said. "It doesn't do a damn bit of good, and I wouldn't advise anyone to embrace war as a means of solving world problems."

Mr. Romero was interviewed in San Diego, California, on September 7, 2004, by Rene Zambrano.