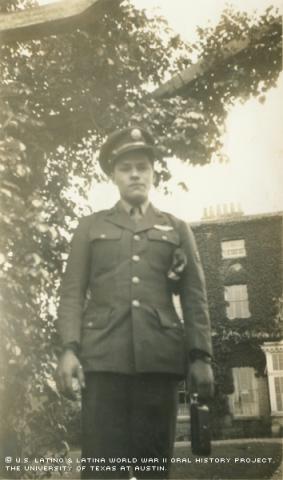 Thomas Galindo was working at an Austin drug store selling sodas for 35 cents when he heard the shocking report on the radio. It was news that would irrevocably change the 19-year-old's life.

"I was getting close to that age," he said. He knew he was going to war.

"It came out in the paper, if you sign up now, you'll get what you want in the service, but if you wait until they call, they put you where they want to put you, you can't do anything about it," he said. "I didn't want to get in the infantry."

Galindo enlisted as a radio operator on Nov. 10, 1942. He and both of his brothers, Ramón and José, were also stationed in Europe.

"It was like a dream, something you read in a book," he said. "I never thought I'd be over there."

In World War II, Galindo worked on C-47 cargo planes. He gathered intelligence and assisted in transporting men and supplies over mountainous terrains in southern France. He also helped save the lives of wounded soldiers, flying them to hospitals in England. He brought supplies like ammunition, bombs, gas and oil to soldiers on the front lines, as well as took prisoners back to England. He even took freight to the controversial General George S. Patton.

Galindo said he didn’t do the most dangerous work in the war, but he still came close to being killed by an erratic German bomb.

"You see it start coming across like this," Galindo said, his right hand moving in a horizontal line. "All the sudden it goes straight down."

"And I was right here," he said, placing his left hand a few inches away from his right. "You never can tell where those things are going to go."

War ended in Europe in May of 1945, but the futures of the Galindo brothers were still up in the air.

"I didn't know what was going to happen," he said.

Would Galindo, who hadn’t been home for more than two years, go to the Pacific and help with the Japanese invasion? They finally realized they’d get to go home after hearing that President Truman dropped the atomic bombs over Japan.

"That saved me a lot of worry," Galindo said. "I didn't want to go the Pacific."

Seeing friends die and facing death in the war, Galindo said, made him realize how precious life is.

"It made me think more about life, the things you want to do," he said.

Back home, life’s path led to a job with El Fenix, a family tortilla factory on East Sixth Street. He worked with his father, sister and brothers.

"It wasn't really big," Galindo said. "It had maybe nine customers a week."

But it was a job, something that was hard to find for many GIs coming home from war. El Fenix dominated family conversation.

He met his wife, Ernestine Guajardo, in 1950. Galindo's parents knew Ernestine's parents. They married in 1955 and had two sons. After their marriage, Ernestine became the tortilla factory's manager.

The company was founded at a time when the tortilla market wasn’t as crowded as it is today. Through the years, Galindo's small tortilla factory grew and expanded. After expanding to Dallas, the company had to change its name to El Galindo, as El Fenix was already taken.

At its peak, the company employed 70 people. El Galindo leased two large trucks and sold millions of tortillas and thousands of cases a week.

"You have to work fast and hard, and work a lot of hours," he said. "If you make something good, you don't have to advertise, they'll buy it anyway."

Galindo retired in 1995 and sold the company. His advice to current generations?

"Invest," he said. Think about the future. But on the other hand, do not forget about the present.

"You're not going to stay young for long," he said. "Time marches along."

Mr. Galindo was interviewed in Austin, Texas, on October 5, 2001, by Antonio Gilb.