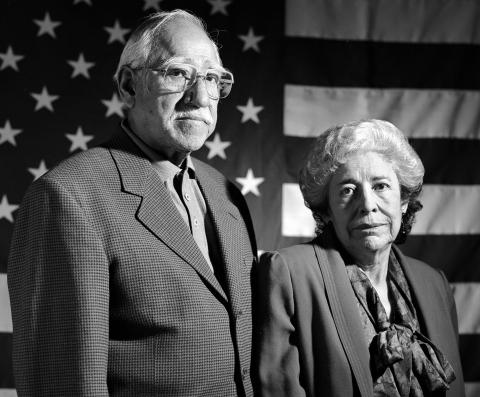 As a child, growing up in Austin, Theresa Herrera Casarez loved to sing, dance and recite poetry. Later, during WWII, she was able to put her talents to work entertaining soldiers at USO clubs and at nearby Camp Swift.

"[For] Cinco de Mayo and Dieciseis de Septiembre fiestas my mother...helped me to learn [Mexican] poesias (poetry)," she said, referring to celebrations in honor of Mexican holidays. "She . . . made sure that I would have a new one for every year. People had no other type of entertainment. We looked forward to putting on the big show."

Speaking from the South Austin home where she and her husband, Pete, have lived for nearly 30 years, Casarez told of her family and life in Austin during the Depression. Her parents, Anastacio Herrera, and Zoyla Rivera, both natives of Villa Juarez, Coahuila, Mexico, moved from Bertram, Texas, to Austin when Theresa was 11 months old. To support his wife and seven children during the Depression, Anastacio Herrera took a job in a cannery run by the Works Progress Administration (WPA). Here, meat was canned to give out to unemployed people.

Casarez recalled that in the Depression years, her mother frequently gave food to people who came to the door.

"My mother never, never sent anyone away without giving them the little bit that we had. She was always sewing things and mending . . . [in case] anyone came by the house that needed clothing," Casarez said.

Casarez was the youngest of seven children. During the Depression, her older siblings worked to help out the family. The oldest sister was a seamstress for a woman who supplied clothes for Scarborough's Department Store. Another sister sewed clothes at a factory run by the WPA. When he was just 14, her oldest brother got a job for Western Union delivering telegrams from his bicycle.

Theresa Casarez' first school was the all-Mexican American "little school on 3rd and Comal" where her siblings had gone. She spent another year at Bickler Elementary School where she and her sisters were taunted for bringing tortillas to eat.

From second through sixth grades, she went to Palm Elementary School, where there were few Mexican Americans.

"We sort of stuck together," she said of the Mexican American students. "We didn't even think of mixing."

Yet, her teachers treated her "just fine." In fact, when she was in the fifth grade, she was the only Mexican American chosen for a lead part in an operetta.

At John T. Allan Junior High, she was paid 25 cents an hour by the government to be a student aide. When she went on to Austin High School, she found her Spanish came in handy -- she became a teacher's aide for her Spanish teacher.

In the early years of World War II, Casarez worked on Saturdays at M. K. Hage, a 5 and 10 cent store on 6th Street. The war affected her job. For instance, because of the importance of metal to the war effort, before she could sell a tube of toothpaste, she had to get the empty tube back since "they were made out of metal." Also, she was required, to "get a name and address" of anyone who bought a bottle of Witch Hazel since some people drank it because of its alcohol content.

At age 16, Casarez fostered her love of dancing by joining a dance group that performed at Zaragosa Park throughout the war years.

In 1944, Alicia Munguia, a University of Texas student, formed a group of singers and dancers that entertained at various places in the area until 1946. Although the group was made up of mostly UT students, Casarez and her friend, Connie Cantu, were asked to join as dancers.

"We used to go to the university . . . to Camp Swift (in Bastrop) or to the U.S.O. to entertain. We did the typical dances, the jarabe tapatio, the zandunga, just about any dance that was typical at that time," she said. "For every different dance we did, we had a different costume."

Her costumes were all handmade by her older sister, Frances.

Her two brothers served overseas in the war, one in the Pacific Theatre and the other in Europe. Her youngest brother, Raul (Ralph), was in the Air Force and served in the Pacific. It was 1944 when her oldest brother, Abdon (called "Feve"), a father of five, was drafted into the Army. He was in the Normandy invasion and was sent later to the Rhine. Few letters arrived from her brothers, and the family did not know where they were.

"Of course, my mother . . . and all the mothers waited for the mail every day," she said.

Young Theresa also wrote to a young soldier she had met before the war -- Pete Casarez, who was stationed in Guam.

Families with sons in the service displayed a flag with a star for each child in their front window. In some cases, there were sons killed in battle and Casarez remembers how painful it was when the bodies began coming home after the war. Wakes were usually held in the family's home, and military services were conducted at the cemetery.

After the war, GI benefits allowed some to get an education. For those who stayed back home, there were fewer opportunities to move up the economic ladder. When she graduated in May 1945, there were only two other Hispanics graduating. Casarez was the only one in her family to graduate.

"Graduation helped me to open another door," she said.

Shortly afterward, she got her first fulltime job, with the Texas Department of Health as a typist. She worked there from 1945 until January 1948, the month before she married.

On February 8, 1948, Theresa Herrera and Pete Casarez were married. The couple lived with his parents for the first four years. Then they built a home on Oltorf Street in South Austin.

From 1945 until 1952, Casarez was an active member of the Ladies' League of United Latin American Citizens (LULAC) Council #85. At that time, LULAC was working for Mexican Americans to receive an equal education, and it promoted higher education. Casarez remembers appreciatively that LULAC awarded her a scholarship to attend Nixon Clay Business School in Austin (now defunct). In addition, LULAC was working to end segregation in all public places.

In 1950, LULAC encouraged Mexican Americans to work at the voting polls; council members asked Casarez to work at the polls at Palm Elementary School. She agreed.

"You had to be a high school graduate, so they (LULAC organizers) were limited. . . .There had never been an Hispanic working there (at Palm Elementary) before," she said. They warned her, 'We don't know what you're going to face.'"

Casarez recalls that everything went well until around 4 in the afternoon when an incident occurred.

"This little lady came in dressed with her little old hat and her little gloves, and she said, 'What

is this world coming to? A Mexican American working at the polls!'" she recalled. "I said, 'Yes, Ma'am. I hope many more will follow me.'"

"We really pushed for them to have a good education," she said. "They got educated to where . . . they have good jobs."

Casarez worked as a bookkeeper from 1952 to 1968 at J.P. McFarland Refrigeration, moving to the Internal Revenue Service in 1968. In 1988, she retired from the IRS after 20 years. She was a work leader in the Accounting Division.

"I am real proud that when I [retired], I . . . received the highest award that they give to anyone in accounting," she said.

She was able to juggle her career and family responsibilities by going to work at 7:30 a.m., so she could get home by 4:00 p.m.

"Somehow I was able to keep up," she said.

Not only did she "keep up" with her children, she was very active in the Parent Teacher's Association and the band and booster clubs at her children's schools, and she served as the State President of the Catholic War Veterans Auxiliary.

Today, Casarez continues to volunteer her time to a variety of charities, including the Catholic War Veterans Auxiliary, Post #1805, and San José Catholic Church.

"In order to get ahead, you need to get educated, and you need to be a responsible person," she said. "You need to know that . . .as a citizen you have an obligation to cast your vote."