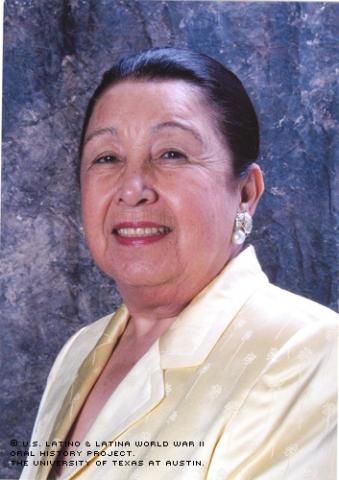 Growing up on her parents’ dairy farm in South Texas, Teresa Lozano Long learned the importance of education and philanthropy early in life.

“My parents believed that you went to school everyday,” Lozano Long said. “The best report card was one with zero number of absent days.”

She recalls her parents’ dedication to the education of not only herself and her two brothers, but also the children of their employees at the farm.

“If my parents saw one of the employees’ children outside playing during the day, they would ask why the child wasn’t in school,” Lozano Long said.

Her parents’ stress on the value of education followed her through her own schooling, which includes a doctorate degree in education from the University of Texas.

After graduating from her high school in Premont as valedictorian, a 16 year-old Teresa left for Austin. Lozano Long’s father took her on her first train ride in June, and she arrived at a boarding house for female university students less than a month after graduation.

While she worked feverishly in her courses as she pursued her degree in physical education, university life also provided lessons outside the classroom.

Lozano Long recalls being one of few Mexican American girls in her physical education courses.

“One day I was in my swimming class and I realized that I was the only Mexican American girl,” she said. “I thought, ‘This is where I can help, give back. I’ll have the opportunity to encourage young people.’”

A group of Mexican American students formed an organization, The Alba Club, which Lozano Long says united the students and allowed for serious discourses about segregation, as well as social activities and intramural sports.

The organization’s sponsor was a professor in the Department of Education, Dr. George Sanchez.

“Dr. Sanchez made us aware of some of the things that we could do when we graduated,” Lozano Long said. “He also made an effort to meet students, and he inspired me to keep going in my graduate work.”

Sanchez’s support was a constant source of motivation as she pursued her graduate degrees, Lozano Long said.

After completing her Master’s, she took a job teaching physical education at Alice, Texas’, junior high school. She was hired during the first year of Anglo- and Mexican American-integrated classes, and was the only one of two Mexican American teachers at the school to teach a subject other than Spanish.

The ability to connect with her students was one of the most important aspects of teaching for Lozano Long.

She says her youth, coupled with her dedication to the success of every student, drove her during her seven years in Alice.

“To me, a student is a student. If a student is not progressing, you help that child,” she said. “But you do need to know something about their culture to know how to reach them.”

Lozano Long says she hoped to serve as an inspiration to her students, a testament to the value of higher education. She also hoped to assuage fears in the minds of some parents, unsure about the prospect of sending their children away to universities.

“My parents instilled in me to give back to the community. If I was educated, I could give back,” she said. “If those parents could know that my parents sent their only daughter that far away, maybe they could do the same.”

A chance encounter brought Lozano Long back to UT, when a friend suggested she come on a summer vacation to Colorado. Prior to the vacation, she had stayed in Austin, waiting for her friend’s sister to finish her master’s thesis. While there, Lozano Long couldn’t resist enrolling in a graduate course to pass her time in Austin. She earned an A, and decided to begin pursuing her doctorate in education.

“I never made it to Colorado,” Lozano Long said. “After I made an A under Dean [Laurence D. Haskew], I said, ‘I think I can do this the rest of the way.’”

Despite her rekindled passion for university life, she delayed her enrollment one year, going back to Alice that fall to complete the final year of her teaching contract, as her parents had instilled in her a strong conviction to honor all of her commitments. When she returned to Austin, she was accompanied by her future husband, Joe R. Long, a fellow teacher in Alice who was returning to UT to pursue his law degree, an opportunity made possible in part by the G.I. Bill.

Joe worked at the State Securities Board after receiving his J.D. from UT Law School, and later worked for the Texas Attorney General’s Office. He practiced law for several years, as well as organized two major Austin banks, granting the Longs financial security, but perhaps more importantly, the ability to continue their commitment to their community.

Lozano Long’s dedication to community giving has been a passion throughout her life. Her parents set a strong philanthropic example by “always helping the community,” she said. “He [her father] and my mother were very giving … People would come to our home at all hours of the day to seek advice from my father.”

Lozano Long began her volunteer work at St. Austin’s Church, Seton Hospital and the Pan American Recreation Center. Later in life, with encouragement and support from her husband, she shifted her focus to donations and establishing a variety of scholarship funds, endowments and other philanthropic contributions to education, health and the arts.

“One reason my husband and I are so interested in giving scholarships is because we know what education can do,” she said.

After the Longs’ sizable donation, UT named its Institute for Latin American Studies after Lozano Long. The institute is important to Lozano Long because of its ties to her heritage.

“That is one of the reason[s] I use Lozano,” she said. “Because if something just reads Teresa Long, it doesn’t mean as much to our people.”

“My husband and I travel,” she said. “And we see the need to help these countries and develop a good rapport.”

Looking back on her life, she says the sacrifices her parents made, coupled with her own hard work and the love and support of Joe, allowed her to overcome challenges.

“I’ve had a good life. It hasn’t always been like this,” Lozano Long said. “We know what it’s like to go to school with practically no money and just get by.”

She acknowledges, however, that Latinos have made significant strides during her lifetime.

“Doors are opening, but you have to work for it, sacrifice,” she said. “It was always easy to say ‘I’m Mexican, they won’t help me.’”

Despite some discrimination and disadvantages, Lozano Long has a fierce love for her country. She says she prefers the term Mexican American to Hispanic, because it acknowledges her Mexican heritage, while maintaining she is an American.

“You have to get an education, and work hard,” Lozano Long said. “In America, everyone has a chance.”