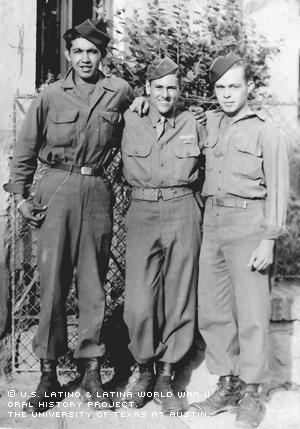 Teodoro Garcia grew up poor in Presidio, Texas, a small border town, during the Great Depression. To relieve the family's burden, he left home in Clovis, N.M., to live with his grandmother in Presidio. Garcia only reached the fifth grade before having to leave school to earn a living, though his brothers and sisters back home were allowed to finish.

"Life was tough and I had to help," Garcia said.

Garcia went to a nonsegregated school and said that everyone got along for the most part. He describes life back then as being the same at it is now, for Latinos except that they were poorer.

At the age of 20, Garcia was drafted and sent to Fort Bliss, Texas, (near El Paso) for training. He was at this camp when the war started. From El Paso he was sent to Wichita Falls, Texas, then to England, then Germany, where he arrived on Feb. 8, 1944.

"It was cold, snowy, wet in Germany, that was the hardest," Garcia said.

Garcia describes the war as "very tough and ugly." Thinking about the war Garcia grows quiet. He declines to discuss it in further detail, other than how he would listen to radio stations from Mexico to pass the time.

After the war Garcia said that there was more of a racial divide between whites and Latinos.

"There are places I still can't go (in Texas)," Garcia said.

Garcia worked on the railroad and oil fields before moving back to Clovis. He married Esther Jimenez in 1946 and they had five children.

Garcia does not have many memories of his own parents, Alejandro and Maria Aguilar Garcia, because he grew up with his grandmother. He does however know that his father was a veteran from the Mexican Revolution and the time of Pancho Villa.

His own family is very important to him and he tries to teach his children from his own experiences in life.