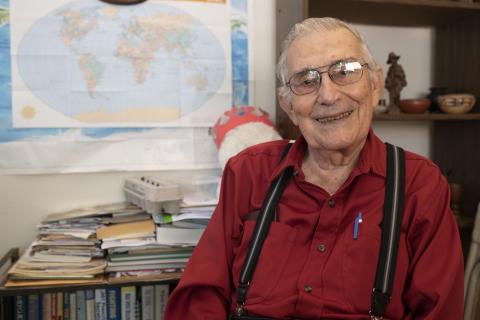 The main topic of this interview centered around professor Stanley Bittinger’s life during the chicano movement in South Texas, and the experiences he had working at Texas A&I University during this time as well. The conversation started off by Bittinger reflecting on his life as a young child and what his family was like growing up. Living in various places such as Nigeria, Philadelphia, and Kansas, Bittinger discussed unique experiences that he had as a young child that most people would not be able to relate to.  He would then move on to earn degrees in Sociology and Chemistry from Manchester college, where he also met his wife. After Bittinger and his wife both finished school they moved to Puerto Rico where they did volunteer work. Bittinger worked in a community center in a rural part of Puerto Rico.

After their time in Puerto Rico, Bittinger and his family moved back to the states where they would eventually find themselves in South Texas. He was originally was invited down to Falfurris, Texas to work with migrant workers through the church he was apart of. A couple years later Bittinger finally found himself teaching at Texas A&I, where he became involved with the chicano movement in South Texas. He wanted to make students proud to be hispanic and he wanted Anglo students to have more respect for their hispanic classmates. One of his first attempts at doing this was organizing trips for students to travel to Mexico to learn more about the heritage and the culture. Bittinger also told stories of segregation protests he witnessed during his time as a professor and the effect they had on the city of Kingsville. Bittinger is seen as a found father of the chicano movement in south Texas and the legacy of his involvement still lives on till this day.