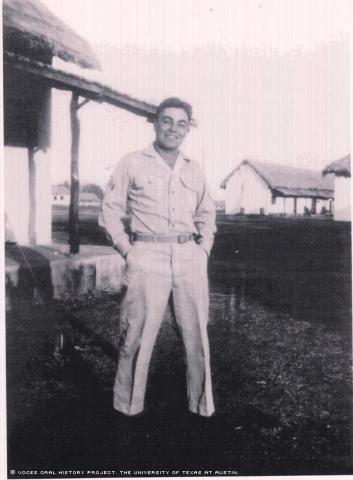 He may only have had an eighth-grade education, but Solomen Rangel knew to stand up for his beliefs and how to get ahead. He not only enlisted and became a sergeant in the U.S. Army Air Forces during World War II, he later fought employment discrimination on the home front.

After the war, when Rangel returned to Argentine, Kansas. He returned to his previous career in railroads. He and three other colleagues, including an African -American, secretly made an appointment to complain at the federal and state level about their treatment, Rangel said, adding that they sought equal treatment and the opportunities that their seniority should have provided.

The four men, two of whom had families, secretly went at night and talked to a state representative, Rangel said, recalling the meeting.

"Well, I would advise you to go back and talk to your families because you are taking on something, that we are not too strong on that, and you could lose your job," he remembered the man telling them.

This did not stop the men. They filed complaint against the railroad, Rangel said. He said it took years for the government to achieve real change.

"We did it," he said. "After that, after we took over [the union], we made the first Mexican foreman." Rangel said.

In what he described as really important firsts, women, Mexican-Americans, and African-Americans soon were beginning to get behind the throttle of the train engines, Rangel said.

Rangel said he learned to take charge and not be afraid to take chances. His three years in the military may have given him the courage to complete his mission in Argentine, Kan., he said. Rangel, who joined the Army in January 1944, said he was proud that he was able to work his way up to sergeant. He said that he joined because it was the right thing to do. Back at home, he had his mother and four siblings to support while overseas, Rangel said. The only income they had was his military pay.

"I only had an eighth grade education, and I got up to sergeant, you just don't get up there that easy," Rangel said. "There are all these other guys; they all had high school, some of them had college. But I was the one out there telling them what to do."

He recalled learning to identify, handle and disable different kinds of bombs and toxins as a toxic gas handler specialist with the 771st Chemical.

During his time working with the different toxins, Rangel said that he was hospitalized twice for exposure to mustard gas. But he only knew of one man who was sent home for an injury from the toxins.

Rangel grew up in Turner, Kan., a very small town that he said had about four to five families. When Rangel was 14, his father, Antonio Rangel, died during an argument at a cockfight. The young Rangel had to take over as the head of the family and begin working, he said.

At that age, he began working in the beet fields of Nebraska.

"The work was hard, very hard, but it paid good," Rangel said. Then he followed in his father's footsteps and got a job as a car inspector with the Santa Fe Railroad, which he kept until he retired, Rangel said.

Rangel said that supporting the family became his responsibility, because of an accident that his oldest brother, who was three years his senior, had suffered.

"As a child, they were building a little shed, and my father dropped a piece of wood on his head, " Rangel said. Due to this accident his brother began to have epileptic attacks and consequently had difficulty keeping jobs. Rangel said.

His older brother even tried to enlist in the Air Forces, like Rangel, but got discharged after six months due to his epilepsy, Rangel said.

The younger Rangel said he continued to have medical issues later in life because of his exposure to all of the toxins during the war.

After the war, he met Elvira Rangel on a blind date, and they married on April 16, 1955. The couple had four children.

Mr. Rangel was interviewed by Rudy Padilla in Kansas City, Kansas, on June 17, 2010.