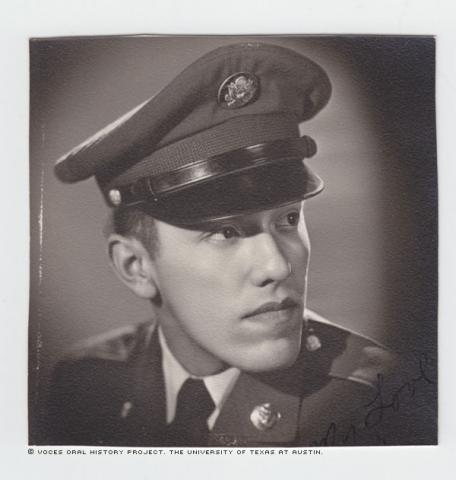 Before joining the military, Garcia had only left the United States to visit relatives in Mexico. He grew up in the town of Charlotte, Texas -- in Atascosa County, near San Antonio -- with his three older sisters and a brother. His family was known in the small rural town for the Garcia pool hall and barbershop. After school, Garcia would work at the pool hall with his siblings, while his father, Avelino, worked at the barbershop. Servando's mother, Maria Rivas, briefly had a cafe in the pool hall.

"It was a fun time," said Garcia. "A very family-oriented place, you know, for friends and relatives."

Garcia graduated from Charlotte High School and attended Palo Alto Community College in San Antonio for two years. But he had a hard time finding a job.

In 1959, he joined the U.S. Army and completed basic training at Fort Leonard Wood, Mo., before transferring to Fort Benjamin Harrison, Ind., to study accounting. A year later, he was asked to complete his "dream sheet," a list of his preferred assignments.

"Where would be a nice place to go as a single guy in the Army?" Garcia asked himself. He listed: Italy, France, Germany and San Antonio.

His first assignment was in Paris, France. There he lived in an apartment and worked in a finance office on the Champs Elysees. He earned the nickname Gus because he rode the bus to work every day. The nickname stuck.

"To this day, there are few people who know me by my real name," Garcia said.

On New Year's Eve 1962, Garcia met his future wife Berthe Holst Madsen, a flight attendant from Denmark. The two dated for five months before getting married in Copenhagen. Not everyone in his family was happy about the marriage. One family member thought his bride might be using him as her free ticket to the United States.

"It was true, a lot of the English girls would marry a GI ... then, once they got to the States, would divorce them and then stay here," Garcia said.

The Garcias had been married for 48 years at the time of his interview. The family member who was initially skeptical became closer to his wife than any other relative.

Garcia was unable to extend his stay in Europe after his marriage, so he re-enlisted and went to Fort Monmouth, N.J., to study communications. After he finished school, Garcia was sent to Fort Benning, Ga. Being in the South in the early 1960s was an eye-opening experience for his wife, who had not previously had to deal with racism.

"She was brought up in Europe, where you don't know the difference," Garcia said. "There you don't put that much emphasis on: Your skin is black, and mine is white."

After a year in the United States, Mrs. Garcia was happy to return to Europe when her husband was sent to Stuttgart, in what was then West Germany, to work for a signal unit. In 1965, their first daughter, Tina, was born. By that time, the Vietnam War was escalating, and Garcia was told he likely would be sent to the Pacific. A year later, Garcia was sent to a new unit at Fort Meade, Md., to prepare for for an Asian tour of duty. Once back in the United States, Garcia's wife and daughter moved near his family in San Antonio.

Garcia did not know specifically where he was going in the Pacific when he boarded the troop carrier in Norfolk, Va. The ship sailed through the Panama Canal and docked in San Diego, before reaching its final destination in Okinawa, Japan. Garcia was assigned to work in the finance office for a month before his wife and daughter came to live with him. In 1969, another daughter, Michelle, was born.

Instead of being sent back to the United States, Garcia volunteered for a tour of duty in South Vietnam. He went directly from Okinawa to Saigon, now called Ho Chi Minh City, to join the 57th Signal Company (Communications, Security and Logistical Support). For the first time, Garcia's family was unable to join him, so his wife went to live with her mother in Copenhagen.

In Saigon, Garcia worked in an office in the city and stayed in a hotel that was occupied by the military. The only Vietnamese people that Garcia knew were workers in the hotel. However, he was instructed not to talk to any Vietnamese because the military did not know who might present security risks.

"Everyone who was Spanish-speaking was there," Garcia said. "...And I was surprised to see so many of them."

A few months later, the 57th Signal Company went from hotels to barracks in Long Binh, about 20 miles from Saigon. The unit worked away from the barracks near a hospital and, from his window, Garcia could see soldiers being carried into the hospital.

"You weren't in the middle of a war zone, but there were a lot of rockets and things that happened in that area, because the Green Berets had a camp near us," Garcia said, referring to an Army Special Forces unit.

Garcia said some soldiers in the field would criticize him for not being an infantryman. But Garcia would simply respond, "Someone has to do the paperwork."

"It wasn't that I was afraid, but why would I want to subject myself to something like that?" Garcia said. "You're a soldier first, and whatever your [job assignment] is second."

After a year in Vietnam, Garcia lived in Germany for seven years working with software programming in support of intelligence operations. In his last year in the military, he moved to Fairfax, Va. He later went on to work for the Computer Sciences Corp. for the next 21 years. In 2007, after retiring from their civilian occupations, Garcia and his wife moved to San Antonio.

Garcia said he had no regrets about joining the Army for himself or his family, because his daughters were able to experience different cultures while growing up.

Mr. Garcia was interviewed by Mosettee Lorenz in Castroville, Texas, on Nov. 6, 2010.