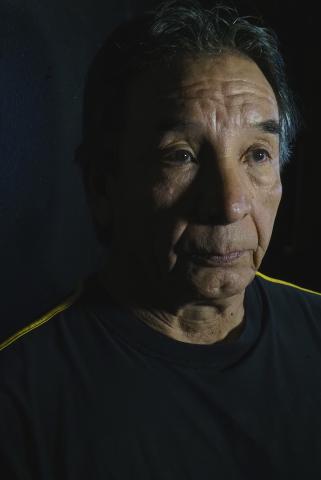 Two years before Sergio Porras received his draft notice to serve in the Vietnam War, he was marching in the streets of Uvalde, Texas, with hundreds of other Mexican-American high school students.

It wasn’t war or the draft they were protesting. The students of Uvalde High were fed up with discrimination in the town’s public school system.

Uvalde, 86 miles southwest of San Antonio, was divided by railroad tracks. Whites lived in the northern section of town; the Hispanics, south of the tracks.

If a Mexican American was found north of the tracks, “they would lasso you, and you were going get beat,” Porras said. “And of course if we had a white on this side of the tracks, the same thing would happen. No actual reason. Just got into it. That’s the way it was.”

The school system also was segregated: One elementary school was designated for Caucasians, one for Hispanics, one for African-Americans.

People accepted it, Porras said. “It was no big deal. It was common.”

Porras said his father abandoned the family when Porras was a child. His mother, Irene, worked in a packing plant to support her four children.

Starting when he was 6 or 7, Porras would wake up early on weekends to pick up Coke bottles on the streets that he could sell for a penny each. “I felt good about making the penny,” Porras said. “That would buy me toys that I really wanted that I couldn’t afford otherwise.”

In junior high, Porras worked in the school cafeteria so he could get a free lunch. “Instead of taking a lunch, we worked so we could eat free,” Porras said. “It was normal for everybody working in the cafeteria.”

Sixth grade opened Porras’ eyes to the discrimination in Uvalde. “You were a ‘dirty Mexican.’ ‘Take a shower, Mexican, or go home,’” Porras said. “We were treated differently, big time.”

In 1969, Porras was a 17-year-old senior in high school. He was a member of the Mexican American Youth Organization (MAYO), where he discussed issues like equality in education and social justice. Mexican-American students in Crystal City, just 39 miles away, had staged a walkout that December over discrimination issues. Similar protests were occurring in other Texas cities around that time.

“It started there, and then it wound up that we actually got into it too,” Porras said. “We were tired of the discrimination,” he said. “We said, 'We’ve had enough of this. Why don’t we do a huelga, or just walk out? It just happened.”

On April 14, 1970, around 10 a.m., students in Uvalde started their walkout, which eventually would grow to 500 students and last six weeks. Porras became involved with the protests from that day forward. While the immediate cause was the firing of a respected Hispanic elementary school teacher, the issues grew to include the prohibition on speaking Spanish at school.

Students risked being punished if they were caught doing it. Porras said teachers would bring the students to the front of the class, have them roll up a pants leg and then hit them with a ruler.

“I think there was a consensus as far as being treated equally” among the protesting students. “If you had a primary language, that you would be allowed to speak that language. That was mainly what I was looking for,” said Porras, who, like many other students, spoke Spanish at home.

His mother, a Democratic Party activist, supported him. But many in the community didn’t agree with the protests, and law enforcement agents sometimes hassled them.

“I remember on the walkout where the country sheriff would be standing on the sidelines and the Border Patrol would throw soap at the protesters,” Porras said.

Porras said he was not a protest organizer but did participate in some events. He also was a volunteer tutor in the makeshift school that was established to help students keep up with their schoolwork. Despite that effort, students who participated in the walkout lost an entire year of school.

Porras didn’t go back to repeat his senior year; he went to a six-month GED program in Lincoln, Nebraska, and then attended Southwest Texas Junior College in Uvalde. The Nebraska program was the only one endorsed by VISTA representatives at the time.

Even though the walkout didn’t create change in the school system overnight, Porras believes it was successful.

“I think it took several years to see any results, as far as having more Spanish-speaking teachers, as far as being more lenient, as far as you were allowed to speak Spanish if you needed to,” Porras said. "I contributed to a change here. ... We're going to stop the discrimination ... and eventually we did."

When he received his draft notice in 1972, his choices were to be drafted or enlist. He chose to enlist in the Navy.

“If I sign up for the Army, maybe I might not be back,” he thought at the time. He was sent to the Naval Station Great Lakes, north of Chicago, for boot camp. A few months later, in October 1972, he got orders to go to Vietnam.

Complicating his impending deployment was the fact that his then-girlfriend, Zulema Lara, was three months pregnant. The day before leaving, he told her mother that he would marry her daughter as soon as he returned home from Vietnam.

“Her mom said, 'No, that’s not going to happen. You’re going to get married today,' which was a Sunday,” Porras said. “They even opened up the courthouse so they could give me a marriage license.”

After completing his initial training, Porras went home on a 20-day leave in February 1973.

“And of course when I came back, I took my wife to the hospital that night, and she had a baby the next day.”

Stationed on the USS Saratoga aircraft carrier off the coast of Vietnam, Porras worked 18-hour days. He parked jet fighters, helped with launching for bombing assignments, and worked as a translator. He sent his monthly paycheck to his mother. The carrier had a radio and TV station. He found out that his high school had won the statewide football championship a week late.

The carrier participated in a battle in the spring of 1972, and Porras experienced direct bombing.

When he returned to Uvalde, Porras was unemployed for three months. Throughout the years, Porras has worked as a field hand, carhop, waiter, wool packer, and shoeshine boy. He later got a job at the state employment office for veterans, where he worked for 30 years. There, he served as a contract worker, Job Corps recruiter, and veteran employment representative.

“White residents of Uvalde don’t like to talk about the walkout," he said. There still is discrimination in Uvalde, but it’s less visible than it was when he was growing up. He remembers stories of when Ku Klux Klan members used to walk around town, not hiding where they stood on race.

“There’s some old folks still there, but now they don’t show it. They hide their white coats,” Porras said.

Porras was active in community and political issues as a young man, and that has continued, especially after a battle with lung cancer that required two surgeries in 2009. He rattled off a long list of local, county and state boards and commissions. He’s been an elections judge for more than 25 years and is on the local committee for the United Farm Workers.

This interview was conducted by Brigit Benestante in Uvalde, Texas, on April 9, 2016.